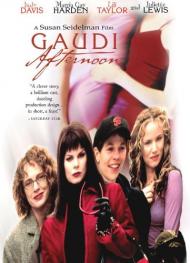 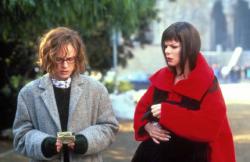 Gaudi Afternoon is a mystery with a twist.  Actually Gaudi Afternoon is a mystery with several twists that make for an interesting plot.  Filmed on location in Barcelona, Spain it also features some beautiful locations, many that are centered around the buildings of Spanish Architect Gaudi.  Ultimately though, its somewhat flat acting, and lack of sympathetic characters results in a movie that comes up somewhat short.

The movie centers around Cassandra Reilly (Judy Davis), a writer from Kalamazoo Michigan, living in Barcelona and making a living by translating Spanish language novels into English.  She is approached by Frankie Stevens, played by scene stealer Marcia Gay Harden, who hires her to assist in locating Frankie's estranged, and gay husband Ben.

A simple enough request made somewhat more complicated when it turns out that Frankie is actually Frank, a man halfway to becoming woman, and Ben turns out to be a lesbian.  The real person Frankie is looking for is his and Ben's daughter; Delilah.

There are other interesting supporting characters like Juliette Lewis's April, Ben's new-agey lover, and Christopher Bowen's Hamilton Kincaid, the bisexual magician with whom April, Ben, and Delilah are staying.  Together they create a great deal of background noise, but do little to forward the plot.

Marcia Gay Harden's over-the-top Frankie is the one highlight of the movie.  She gets the most laughs with some of the best lines.  "Don't you love Europe, even the children smoke.  In California they make you feel like a criminal just for lighting up," she says in an exaggerated husky voice.  Apart from her, the other characters left me cold.  Cassandra's mother issues that are never really explained, make for the film's main subtext, but even the resolution of that is unsatisfying.

After the initial setup of Frankie seeking her daughter, there is a lot of maneuvering between Ben and Frankie, but for some of it the motive isn't very clear, and the final solution to the custody problem is a tad melo-dramatic, with the daughter Delilah falling in with Cassandra too quickly, and spouting lines that no nine year-old would ever say.

Colorful and paced quickly enough never to become boring, Gaudi Afternoon never drew me in or made me care enough about the characters to make me feel emotionally invested in the film.  Which is a shame, because with a funnier or sharper script it could have been quite good.  As it is, it's a disappointment.