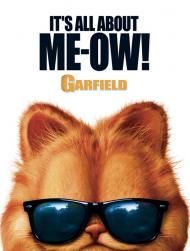 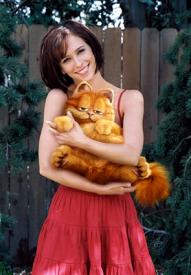 A live action version of the Garfield comic strip seems like a good idea, especially with Bill Murray doing the voice of the titular fat cat. The time is certainly right, with the state of CGI animation being such that the comic antics are easily reproducible on screen, and Bill Murray, who provides Garfield's voice, hasn't been this hot – thanks to his recent Oscar Nominated performance in Lost in Translation – in a very long time. Somewhere along the way however, things got lost in this translation as the thinness of its plot is rivaled only by the thinness of the laughs this movie provides.

Admittedly, the humor in the Garfield comic strip has always been a bit lean. Most of the jokes revolve around the sheer laziness and hunger of Garfield and his love/hate relationship with the dog Odie. Jon, Garfield's sad sack owner, while vaguely tolerated, is mainly there as a source of food. Where the movie goes wrong is by injecting the story with too much heart and not enough jokes. The end result is an overly sappy mish-mash that only the non-discerning or the very, very young will be able to enjoy.

One of the oddest choices the filmmakers made was to make Garfield computer animated, while having everyone else – including the other animals – played by live actors. Particularly hit hard by this, is Odie, who in the comics has a very distinct, and rather odd look. Here he is just a dog. Why they didn't either use a live cat for Garfield or animate all the the other animals as well, is jarring to watch, and bewildering to behold.

What story there is, revolves around Odie's arrival in Garfield's house. Jon (Breckin Meyer) only adopts the dog because his veterinarian (Jennifer Love Hewitt), whom he's in love with, urges him to do so. Garfield resents the intrusion of this oafish stranger into his perfect world and does everything he can to get rid of him. The plot then meanders into Odie's kidnapping by a local television personality who needs a dog so that he can get a job in New York. By the time this happens however, you will have lost all interest.

If there is any tiny bit of enjoyment to be had from this movie, it is in Murray's game attempt to enliven Garfield. At times, he manages to evoke at least a chuckle, if not an actual laugh, with his droll performance. The live action human actors are merely mannequins, who could have been played by anyone. Hewitt seems almost embarrassed to be here, as her part requires her to do little more than stand around in short skirts looking cute. Perhaps Murray had it easy, since at least his face will never be associated with this movie.

Without anything to really hold your attention, you won't be able to help noticing the many, many, many product placements that abound throughout the movie. I won't give them further advertising by mentioning their names here, but if you do get stuck watching Garfield, you can distract yourself by counting them. It will be more fun that actually paying attention to it.

Breckin Meyer in Garfield: The Movie.

Garfield is a hoot. Okay, it helps to enjoy this movie if you own a type "A" personality cat or watch it with an 8 year old. I have both. I own an orange, know it all, self centered feline. I couldn't help but see him as I watched this movie. My 8 year old started laughing during the before the movie cartoon, and never let up the entire feature.

Scott is right in that Murray is the best thing going in this movie. Such tiny lines, like "Oh, you little suck-up!" and "Down, dumb dog." are made bigger, and funnier, by his delivery.

Scott complained that Hewitt does nothing more than look good. Is that not what she always does? Have you seen The Tuxedo? Hewitt is not a great actress. This is the very type of role in which she belongs. She can't act, but she wears that skirt quite nicely.

This movie is definitely aimed at a certain audience type, animal loving children. For that audience, it delivered big time. I found Garfield entertaining until the end. The villain is too pathetic and Garfield demonstrates far too much energy and compassion to resemble the comic strip character.