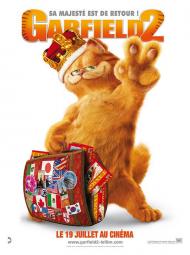 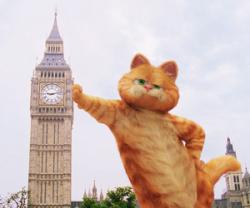 Bill Murray voices Garfield the cat in Garfield: A Tail of Two Kitties.

I had no idea that the original Garfield movie made enough money to warrant a sequel. Not only was the first film completely forgettable, it changed the character too much from the comic strip. Garfield never had that much energy. Garfield: A Tale of Two Kitties finds the fat cat enjoying England's upper class lifestyle and once again has far to much ambition to be the slovenly rude cat I find in my newspaper every day.

In the comic strip Jon, Garfield's owner, couldn't get a date if he was covered in money. In this movie series he has a steady girlfriend, Liz. He flies to England to propose to her, with Garfield and Odie stowing away in his luggage. Meanwhile, a rich, titled, old woman dies and leaves her entire estate to a spoiled fat cat that looks just like Garfield. Before you can say Charles Dickens the cats switch places. The old ladies nephew, played by my favorite John Cleese impersonator, Billy Connelly, tries to get rid of Garfield so he can get the inheritance.

The movie throws in a barn yard full of talking animals. In one of many needless scenes, Garfield has all of the animals in the manor home's kitchen making lasagna. The animals are all voiced by famous British Celebrities. It makes little difference as nothing to exciting happens to anyone of them so they may as well have saved the money and hired unknowns.

Although my youngest son liked this movie, I was less than thrilled. The charm of Garfield has always been his I don't care about anything but me attitude. In this, and the original, film he keeps learning compassion. That is not the Garfield I find funny. In the comic strip, Jon Davis, Garfield's creator, makes fun of all cat owners by having Garfield think sarcastic things about his owner, Jon Arbuckle, who keeps him around and loves him none the wiser. The Garfield in the movie is just a lucky cat who things happen to.