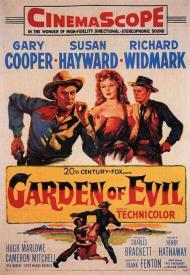 Garden of Evil is a sprawling western from Twentieth Century Fox in 1954. Directed by Henry Hathaway, it was shot on location in Mexico, in Technicolor and CinemaScope. Visually it's a stunning motion picture with a rousing score by Bernard Herrmann (this was the only western for which he composed a score in his entire illustrious career). It stars Gary Cooper (in his late career run as a cowboy), Susan Hayward and Richard Widmark.

It begins with three American soldiers of fortune, en-route to the California gold fields, being set ashore in a sleepy Mexican coastal village, due to some unspecified problem with the steamboat they are passengers on. Hooker (Cooper) is a former lawman, Fiske (Widmark) is a card sharp, and Luke Daly (Mitchell) is a gunslinger. The three men are approached by a woman (Hayward) in a tiny cantina and offered $2,000 dollars apiece to help rescue her husband. He's trapped in a gold mine in hostile Apache territory. The three men, along with the Mexican owner of the cantina (Mendoza), accept the offer and set off on their mission together.

What follows is a good old-fashioned Hollywood adventure of the highest order.

Along the way the men begin to bicker with each other and each of them finds himself attracted to Leah. After several days of traveling on horseback they arrive at the gold mine to discover Leah's husband (Marlowe) is still clinging to life. The husband's name is John Fuller and he later tells Hooker that Apache warriors came to look at him as he lay trapped in the mine. He said he figures they didn't kill him because they couldn't think of a worse way of dying than how he already was.

Eventually the movie turns into an exciting chase as the gold hunters race for their lives with a tribe of angry Apaches on their heels (the gold mine is located on sacred Indian ground). The climax makes for terrific entertainment and it even gets a bit emotional. I won't spoil the ending.  I will say the movie's big dramatic scene takes place between Cooper and Widmark, with Widmark uttering the classic line, "When that sun goes down, someone always goes with it."

The men are all iconic types. Cooper is his usual noble hero, a man of few words but when he does speak he offers up little pearls of wisdom like, “A cross isn't a bad thing to see...it can be beautiful. And everybody has one.” and “I guess if the earth were made of gold, men would die for a handful of dirt.” Widmark's gambler is jaded and a bit of a dandy, while Cameron Mitchell is the stereotypical gunfighter, dressed in black and angry at the world. Victor Mendoza as Vicente doesn't speak any English but proves himself to be one of the most heroic of the men.

Susan Hayward as Leah is less clearly defined. She's certainly a gold digger (literally) but she remains morally ambiguous throughout the movie. And as with most westerns, this isn't a love story. In fact the relationship between Hooker and Fiske provides the most heart. Look for a very young Rita Moreno as a singer at the cantina early in the picture.

Anyone who appreciates sweeping 1950's adventure movies will enjoy this one. With a talented cast of actors supporting one of the greatest movie stars in history, Garden of Evil is highly recommended.