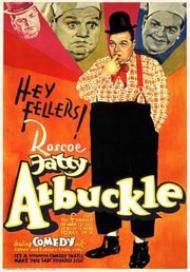 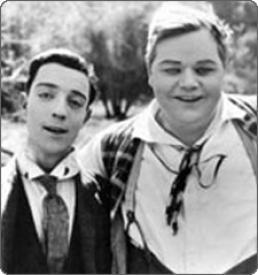 The Garage was Arbuckle and Keaton's last film together and one of their best. With this movie we see that Keaton has as much screen time as Arbuckle. He is no longer the supporting player.

This film finds Keaton and Arbuckle working at a garage that washes and fixes cars. They are also the town fire department. Unlike their earlier work, neither is chasing or competing for a girl. The old man's daughter lives in the fire house with them and her boyfriend, Jim, comes to visit her in a new white suit carrying a nice bouquet. Of course Keaton, Arbuckle and a bunch of oil change all of that. Everyone ends up looking like they have black-face makeup on. That must have been considered funny in those days.

To get back at the boys, Jim calls a false alarm which causes them to go tearing out looking for the fire. Jim then gets himself accidentally locked in the firehouse trying to see his girlfriend. He ends up starting the firehouse on fire. The boys race back to the firehouse to rescue everyone. My youngest son laughed hardest when Jim jumped from the window.

Early in the movie, Keaton has a prophetic scene. He is drinking a soda and then adds some wood alcohol to his drink and smiles with satisfaction. Keaton would become a serious alcoholic later in his life.

After The Garage, Arbuckle and Keaton's career took drastically different paths. Keaton went on to make his own films, doing 6 shorts a year and then eventually full features. In less than two years after this film, Arbuckle would find himself on trial for rape and murder, with his career virtually over. 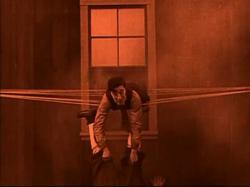 The climactic finale of The Garage.

Buster Keaton was called the Great Stone Face because he never cracked a smile in his films. This should not be confused with a lack of acting ability however. As deservedly celebrated as his physical comedy was, lately I have been noticing just how expressive he could be with his face. He was capable of being wry, bemused or sarcastic with just a lift of an eyebrow or twist of his mouth. Like you Eric I noticed the look of satisfaction on his face after tasting the alcohol in his opening scene.

Sometimes the funniest bits in silent comedies are the title cards. For example after a dog tears Keaton’s pants off he is approached by a “lovely young virgin of 35” who accuses Buster of “Exposing yourself to a young girl!” You have to see it to fully appreciate it when Keaton then performs a very funny Scottish jig. The way in which he then dons another pair of pants, with Arbuckle’s assistance, is a brilliant sight gag.

As talented as Roscoe Arbuckle was, I’m not sure if his brand of shtick would have translated to feature films. Keaton definitely outshines him here and proves once and for all that he was ready to strike out on his own.

Like virtually all of their collaborations this one ends with a chaotically fast-paced action sequence involving trick photography and stunts. Here it takes the form of a fire in the garage and a daring rescue on some telephone wires. Like my nephew I laughed hardest when Jim jumped from the window and slammed violently into the ground. It is slapstick in its most pure form. 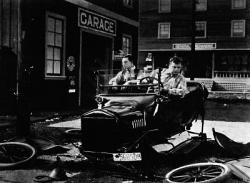 Buster Keaton and Roscoe Arbuckle in The Garage.

In The Bell Boy (an earlier Arbuckle/Keaton short), Keaton is polishing glass in a phone booth when it turns out he's just miming it and there is no glass. The Garage opens with Arbuckle doing the same mime, only on a car window and without Keaton's panache. Buster is also called Buster on the title cards, just as Fatty had always been called Fatty in their previous collaborations. Was Fatty imitating Buster and Buster getting his name publicized merely coincidences or signs that Keaton was about to break out on his own? Was this also the first appearance of Keaton in his signature porkpie hat?

The little joke that you both mention regarding Keaton slipping a little alcohol into his drink may have been prophetic for Keaton personally, but in reality I'm sure it was more of an in-joke regarding the recently passed Volstead Act, which would soon mark the start of prohibition.

As an interesting sidenote, while we think of product placement as a modern phenomenon, The Garage features one of the earliest known instances of it when it displays signs for Red Crown Gasoline in several scenes

Patrick, you mentioned my favorite sequence from this humorous short and that is when Keaton puts on the "kilt" and does his dance and then when he hides both behind and in front of Arbuckle as they walk, culminating with Arbuckle lifting Keaton into Keaton's new pair of pants. And also like you guys, I laughed out loud when Jim jumps out the window.

Like almost all of the Arbuckle/Keaton shorts, this one amuses and flies by. There's no story to speak of, but plenty of laughs. This may have been the parting of ways for these two professionally, but at least they separated on a high note.