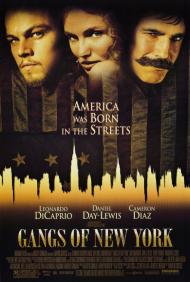 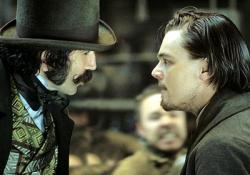 Daniel Day-Lewis and Leonardo DiCaprio in Gangs of New York.

Gangs of New York, Martin Scorsese's long awaited, ambitious epic story of gang wars and riots during mid 19th century New York City, is finally here and it almost lives up to the hype. It is colorfully, vibrantly, beautifully filmed, well acted, the direction is inspired; clearly Scorsese cared deeply about this project. And yet I walked away with the strong suspicion that something important was missing.

This three-hour movie tells the story of two men between the years 1846 and 1863. One is Amsterdam Vallon played by a finally grown-up looking Leonardo DiCaprio. In the movies opening segment we witness Amsterdam, as a small child, witness the brutal murder of his father (Liam Neeson in a cameo) by William 'Bill the Butcher' Cutting (Daniel Day-Lewis) during a turf war between the immigrant Irish gang called 'The Dead Rabbits' and the Anglo Saxon 'Natives' led by Cutting. Most of the action is set in the notorious slum that was the five points neighborhood in downtown Manhattan.

Flash forward 16 years to the Civil War era. Vallon, who was raised in a city orphanage, has returned to five points as a man bent on revenge against his fathers killer. The plot is all pretty standard. Vallon joins Cutting's gang and becomes almost like a son to him in order to eventually kill him. Along the way he meets the pretty pickpocket Jennie Everdeane (Cameron Diaz) and we get a few romantic moments.

The climax of the movie takes place during the infamous draft riots of 1863, when mobs of Irishmen attacked and slaughtered dozens of African Americans in protest of the war and the fact that many freed slaves were coming to the city and competing for jobs.This is visually the best part of the movie because it expands beyond the five points section to show how the riots affected all of New York City.

Like virtually all of Scorsese's movies Gangs of New York is filled with brutal violence and raw sex. His 19th century New York slum is as decadent as Rome under Nero. Still for all its grandeur and scope I think what is missing is heart. I never really cared for any of the main characters. None of them are really sympathetic or even likable, but maybe that's his point that New York City, and by extension America, was built by ruthless people with cruel ambitions. At any rate, it is not a point of view that works for me. 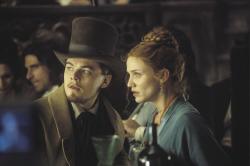 Leonardo DiCaprio and Cameron Diaz in Gangs of New York.

Gangs of New York is a brilliant history lesson. So many films that take place during these years are normally westerns or Civil War movies. Here you see New York at an interesting time not often depicted on film.

The biggest lesson this movie appears to teach is that diversity breeds contempt. Most of the violence is based on ethnic background. In today's economy, we are losing jobs to foreign workers here and abroad. This movie demonstrates that this problem is anything but new. These turf wars, in the movie, are also about the economy and power. You can draw endless comparisons from this movie to today or many other times in history.

This movie is too long and like Patrick, I did not admire or care for any of the characters. No one in this movie has an ounce of decency in them or the ambition to try. If a huge fire consumed and killed everyone in the entire 5 points section featured in this movie, the crime rate of New York at the time would have diminished greatly. Virtually everyone who has a line a dialogue in this movie is by some means a criminal.

Scorsese is notoriously long winded. This movie could have easily gotten its points across with 20 less minutes. However, Scorsese does direct some genius scenes. The best is where he demonstrates, in one single shot, the process of some immigrants who walked off a boat, enlisted in the Army, were armed and put on another boat to go fight in the Civil War.

I also enjoyed a scene, early on, about the competing fire departments. It was like a silent Keystone Cops clip with dark humor. From two different directions, two different fire departments show up to put out a house fire. When they see each other, they immediately have a brawl right in front of the burning building.

The cast is great. The direction is brilliant. The pace is brisk. However, it lacked anything inspirational for me to hope or root for. The Keystone cop firemen had the right idea. Let the whole place burn. No one would have missed it. 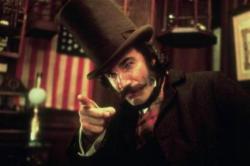 Actually, quite a few people would have missed the Five Points if they'd been burned down. If the place and its people were destroyed, where would the upper class have found their servants? Who would have built the railroads and dug the Erie Canal? However, since this film only highlights the gangs and the criminals of New York, none of the honest, hard working citizens who had the misfortune to live in the worst slum in America, are ever shown. Daniel Day-Lewis' character is portrayed as a racist, particularly against the Irish, but since every Irish person shown in this movie is a fighter, a murderer, a thief, or some other type criminal, his position seems completely defensible in the context of this story.

Like Eric and Patrick, I held no sympathy for any of the characters in this film. More interesting to me was the historical background. Instead of centering on the rivalry between two street gangs, I wish Scorsese had made the Draft Riots the central focus of his story instead of just the backdrop.

Apart from 9/11, the Draft Riots were the greatest acts of violence perpetrated in the city of New York. Unlike 9/11 however, it was New Yorkers who generated the violence upon themselves. For nearly 4 days, the city was terrorized by a rampaging mob of 50,000 – 70,000 of its own citizens. Over two thousand people were killed, around eight thousand wounded. More than 100 buildings were burned down and about 200 others were damaged and looted. Property loss was estimated to be between $1,500,000 and $5,000,000. Soldiers from the front lines of the Civil War were forced to return to New York to help quell the rioters.

Instead of delving deeper into the back-story and characters personally involved in the riots, Scorsese chose to focus on the Gangs, which to me was the wrong choice. Personally, I didn't care which of the many colorfully named Gangs ruled the underworld of the Five Points, but I could care about the fate of the city.

I do agree with Patrick that this movie is beautifully filmed. It does capture the look and the feel of the times. To me though, it's like telling the story of 9/11 from the point of view of the rats who lived in the World Trade Center's subterranean levels.