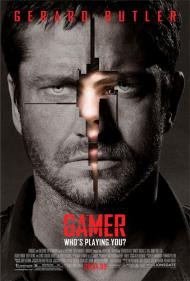 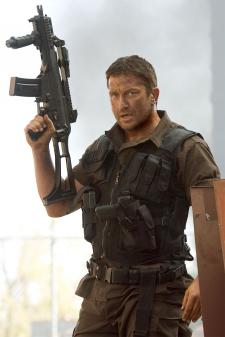 Gerard Butler as Kable, in Gamer.

In the future, the internet and on line gaming have taken over everyone's life. People are able to go online and control another real person. This of course leads to plenty of sexual encounters. Pornography has obtained a whole new level of entertainment.

The most popular game is where people take control of real people and fight each other, think "Call of Duty", only they are real people you are shooting and controlling. The participants are all convicts who volunteer to have someone else play them. If they survive 30 games they get set free. Seem familiar? The Running man and Death Race were both about convicts playing a deadly game for a television audience with the hopes of getting set free.

Kable is the most popular of the participants. He only has a few more games to survive to be eligible for parole. His player is a spoiled 17 year old boy, whom Kable has never met. As Kable describes game play, "I'm the hand. Someone, somewhere else is the eye." A group of rebels help Kable escape the games, and he sets out to find his wife and daughter.

The directors of CRANK, Mark Neveldine and Brian Taylor over do it again. They put so many edits and cut shots into this movie that some scenes are a complete waste of time. Early on, Kable is in the game, but it is impossible to tell what is going on as the scenes shift so fast and often.

Gamer has a very odd soundtrack. The theme is "Sweet Dreams (Are Made of This)" written by Annie Lennox and David A. Stewart, but performed by Marilyn Manson. In the movie, Terry Crews sings a couple of lines from "I've Got No Strings" from Walt Disney's Pinochio. The biggest WTF moment comes when Kable shows up at the rich guys house, who runs the game and has kidnaped his daughter. Just before Kable can give him a well deserved ass kicking, the guy breaks into a dance routine and mouths the words to Cole Porter's "I've Got You Under My Skin" as Sammy Davis Jr is singing it. I kid you not!

This is a really messed up movie. The set up is unoriginal and what is new is too bizarre to enjoy. In Crank, Neveldine and Taylor were able to find a balance between tense action and humor. In Gamer they do not seem to have a handle on anything.

As a final note, Sam Witwer appears in one scene. You may not know who he is, but since this movie is all about video games, I had to mention that he does the voice of Starkiller in "Star Wars: The Force Unleashed." It has one of the best plots I have ever seen in a video game. It certainly has a better one than Gamer. Someone needs to turn that game into a movie.