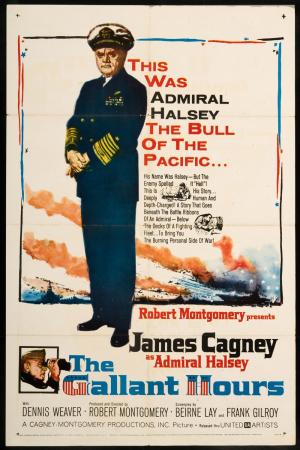 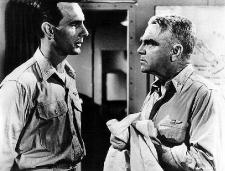 Dennis Weaver wants James Cagney as Admiral Halsey to get his shots.

The Gallant Hours is a great documentary style WWII drama. James Cagney stars as Fleet Admiral William F. (Bull) Halsey Jr. The story takes place from October 18th to December 1st, 1942, from the time Halsey takes over command of the American naval forces in the South Pacific and all during the battle for Guadal-canal. Virtually all the men portrayed were real life soldiers, sailors, pilots and marines. This gives the viewer the unusual feeling of actually witnessing history.

Cagney gives a subdued performance as Halsey. He said it was the hardest role he ever played because Halsey had no obvious mannerisms or tics that he could imitate. Instead he plays the role in a more subtle and soft-spoken manner without his usual outbursts of energy. He shows that he was a very good actor without having to play to the back row.

Halsey’s Japanese counterpart Admiral Isoroku Hamamoto is also given screen time. The movie is like a giant chess game between these two men. Both are portrayed as brilliant tacticians and strategists who often followed their gut instincts. Hamamoto was famous for being a great poker player known especially for his ability to bluff. Watching Halsey outwit and out maneuver him is great fun and since this is based on historical fact also quite satisfying as an American.

There is very little action for a war movie. Instead we are shown what went on behind the front lines in the war rooms where the big decisions were made. This makes for a slower pace than one might wish for in this type picture but it keeps your attention easily. Actor turned director Robert Montgomery does a decent job at the helm. I only question his decision to have a male chorus singing over several scenes. It is a bit unnecessary and downright cheesy in fact.

The gallant hours for Bull Halsey are in many ways America’s gallant hours. The battle for Guadal-canal lives on in legend as one of the greatest land and sea battles in U.S. history. Against almost impossible odds the Allies defeated the Japanese and stopped their expansion in the Pacific. Many brave yet average men died for this cause. As Halsey famously said, “There are no great men, only great challenges that ordinary men are forced by circumstances to meet.” The Gallant Hours gives a great example of this statement. 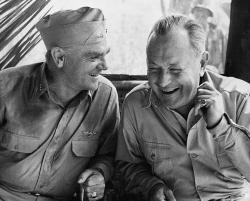 The choral singing bothered me as well.  It is annoyingly dramatic.  It sounds more suitable for a religious film, but then, The Gallant Hours is trying very hard to bestow Admiral Halsey with sainthood.  This is a very detailed account. Great care is made to treat this subject matter with the utmost respect.

Robert Montgomery narrates, introducing each new character as they make their entrance.  He tells their name, rank and some other fact such as if they are married or like to garden.  Sometimes it seems like too much information, while other times it is interesting and even sometimes down right dramatic.  One of the most moving introduction is when Cagney is on the Island talking to a,  "Private First class Eric Lumner.  He manned a 50 caliber machine gun that was assaulted early this morning.  In fifteen minutes he killed 38 men.  He is 19 years of age."  Lumner then walks off with some other soldiers as Montgomery continues, "Three men in that squad will survive the battle of Guadalcanal, Private First Class Eric Lumner is not one of them."

The sheer reverence to the subject matter is likely due to the fact that Robert Montgomery, who also produced this film, served in the U.S. Navy during World War II as a Lt. Cmdr.  Perhaps he met some of the many real life men depicted in this film.  Perhaps he knew men who died on Guadalcanal?  Either way, he treats this story with complete and utter esteem.

The Gallant Hours is told from the perspective of the officers who barely, if at all, see action.  This is exemplified in the scene where Richard Jaeckel walks into the stateroom already occupied by Dennis Weaver.  Jaeckel is dirty and disheveled, and clearly perturbed by the battle while Weaver seems unaffected by it.

If you are a World War II history buff, you may enjoy the details and the naming of real life service men.  I enjoy a good war film, but The Gallant Hours is closer to a docudrama than an action war film.  Considering that thousands of both Japanese and Americans died on Solomon Island and in the surrounding ocean, I understand the film's need to be sincere.  Here is a film that should be shown in high school history classes.  It teaches some history as well as honor. 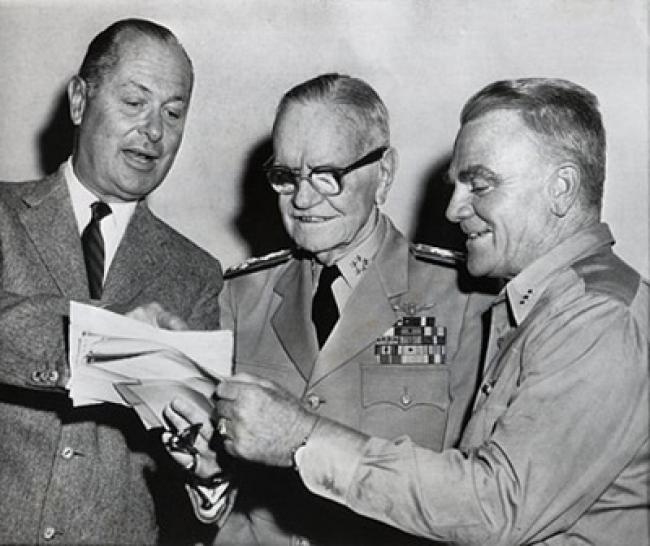 My brothers seem to have enjoyed this movie more than I did. I agree that it's well acted and a fitting tribute to Admiral Halsey and his staff during the Guadalcanal campaign. However the docudrama style of filming is very dry. Sometimes it works to dramatic effect, such as in the scene Eric mentioned where it reveals the fate of Private First class Eric Lumner, but too often it just spoonfeeds the story to the audience.

Too many times we are told something by the narrator only to be shown it moments later on the screen. The old writing axiom is to show don't tell, but director/narrator Robert Montgomery does both. For instance, we are told in voice-over that Vice-Admiral Ghormley is upset but stoic about being replaced by Halsey and we then cut to actor Carl Benton Reid who is conveying exactly that emotional reaction when he greets Halsey on his ship. Or, more literally, we are again told in voice-over that Admiral Isoroku Yamamoto likes to relax by taking pictures before seeing him relaxing by taking pictures. Or when we are told that Yamamoto is an excellent poker player, but then hear Halsey told the same thing during a briefing with one of his officers. You could remove 90% of the narration without losing anything from the story.

I third the opinion that the chorale singing is cheesy and out of place. It's a reverence too far and ends up feeling so far over the top as to become almost a parody of reverence. Likewise overly dramatic are the sounds of naval engagement heard in Halsey's head as he sits in his office waiting for the results of the battle. Cagney is emoting enough so that we don't need this extra soundtrack layer to understand where his thoughts lie.

But speaking of Cagney, it is his constrained performance that is the best part of this film. Normally Cagney is a ball of energy when he acts, but here he plays things much more sedately than usual. This is a more serious, thoughtful, and studied performance than you expect from Cagney. He embodies Halsey with a gravitas and sincerity and it's easy to see him as a great leader of men. The rest of the cast is fine, but apart from Dennis Weaver, who provides a little bit of comic relief, nearly all of Halsey's staff blend together without standing out.

Despite the lack of battle scenes, this movie is still gripping at times. It could have been even more gripping without the narration commenting on every little piece of action. Montgomery needed to have a little more faith in his audience's ability to follow the events on screen without his help.