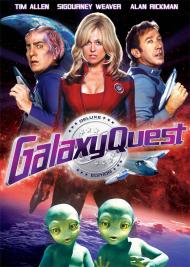 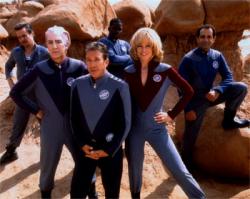 Galaxy Quest is the greatest satire of another movie/television show since Young Frankenstein skewered the original Frankenstein movies. Galaxy Quest takes the concept of the phenomenal popularity of Star Trek and pokes fun at it with hilarious results.

The former stars of a science fiction television show are now reduced to appearing at conventions and store openings to make a living. All except the star of the show, who played The Captain of the Protector. He lives in a nice house in the Hollywood hills, while the rest of the cast live in small apartments. Obviously his career has not gone as badly as the rest of the former cast. This has caused jealousy and dissent whenever the cast gets together in costume for an appearance.

On one such appearance, the cast find themselves taken to a real spaceship made up to the exact specifications of the Protector. An alien race has been watching the Galaxy Quest show and believe it to be historical documents and not make believe. They transport the actors to the ship to solicit their help in stopping their enemy from destroying them.

At first they all object, but before you know it they have all unwittingly assumed their original TV roles. The stars of this movie are then playing two characters each. They are the actors, but then they are also the characters from their show that they act like for the sake of the aliens.

The cast of this movie is spot on perfect. Tim Allen does William Shatner's famous ego very well. Sigourney Weaver is in anti-Alien mode. Here she plays the resident sex symbol. Equipped with fake breast to give her character some extra va va voom.

Alan Rickman is great as the disgruntled cast member. He has to wear makeup for his role and always hates to have to repeat a famous line from the original show. He finds it all degrading. He and Allen's character, Jason, do not get along. Seconds after Jason gets captured by some aliens, Rickman yells 'It's always about you!'

Tony Shalhoub and Sam Rockwell have two of the smaller roles, but they steal most of the scenes they appear in. They play polar opposites. Shalhoub's character takes everything very well while Rockwell gets as hysterical as Gene Wilder's Dr. Frankenstein. When they each arrive at the ship, via flying through space in a clear cocoon, Rockwell lets out a gut-wrenching scream. Shalhoub, still eating something from a candy machine just says, 'That's a fine thing.' In another scene, Shalhoub starts making out with a tentacled alien. Rockwell, looking on in disgust says, 'That's not right.'

Galaxy Quest has special effects as well or better than any Star Trek movie. It has action and even some suspense. Most of all though, it will make you laugh. Galaxy Quest is a completely satisfying movie. 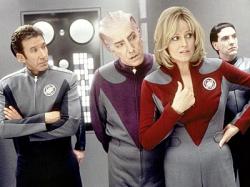 Eric gets many things right in his review of this movie. It is funny, it does have great special effects, it does have action, and it does have some suspense. I also agree that Sam Rockwell and Tony Shalhoub have some of the funniest lines. However, as great as all those things are, what really makes this movie standout is the same thing that helped Star Trek last as long as it did, and that is characters that you really care about.

Eric pointed out that Tim Allen does a great take on Shatner's ego and he's right, but he failed to mention how Alan Rickman does such a great Nimoy. During the 1970's before the Star Trek movies made him a very rich man, Leonard Nimoy very publicly distanced himself from the Spock role, even going so far as to write his autobiography entitled, “I'm not Spock". Like Alan Rickman's character and his dread of having to say, “By Grabthar's hammer, you shall be avenged!", so Nimoy dreaded having to say, “Live Long and Prosper." Unlike Rickman and Allen's characters however, Nimoy and Shatner have always been friends, which is more than can be said of the rest of the cast of Star Trek, who's real-life relationships more closely resembled the relationship between the actors on the fictional show Galaxy Quest.

I do have just a couple of minor quibbles with the movie. Firstly, as a veteran Sci-Fi convention goer, I find it very hard to believe that Jason Nesmith (Tim Allen), as the guest of honor at the convention, would ever have to use the public restroom. And secondly even if you accept the fact that he does have to use it, the very idea that the overheard critical comments of two strangers in there, would send him into a round of depression seems unlikely. In the fifteen years since the show ended, he's never heard anyone criticize him before?

But those two minor, minor details aside, this is a great movie. They do not spoil in anyway the enjoyment of watching these characters together. They assembled a great cast for this movie. They all work so well together that you really can believe that they've known each for years. Even Guy (Sam Rockwell), who only appeared in episode #81 'Assualt on Voltareck 3', as crewmen number six where he was killed by a Lava Monster before the first commercial, blends in well with the rest of the cast.

And one last thing that makes this movie so great, especially to Sci-Fi fans, is that while it is a satire of Star Trek, conventions, and the fans, it is not cruel or mean spirited. The jokes allow fans and convention attendees to laugh along with the jokes, and in fact the movie is even funnier if you are a Star Trek fan, as you'll miss many of the spoofs if you're not one, including, as I pointed out, the Alan Rickman take on Nimoy. This movie is really celebrating the fans and not mocking them, even allowing some of them to help save the crew at the end of the film.

I do have one question for the makers of this movie. Where's the sequel? All good Sci-Fi movies have sequels, so why not this one? 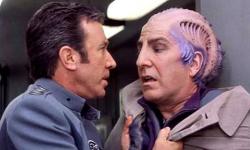 Galaxy Quest is a highly entertaining comedy with all the extras my brothers mentioned. I'd love to disagree - and slam their reviews but, alas, I cannot. Instead I will simply mention my personal favorite characters and moments.

Alan Rickman pretty much carries the movie as far as I am concerned. He is a hilarious Shakespearian snob throughout most of the movie and then delivers the most emotional moment when he gives a heartfelt reading of the line he hates to quote, over the dying alien. He then proceeds to throw caution to the wind and in a rage of anguish attacks one of the evil bad guys. It is a great sequence.

My other favorite characters include Enrico Colantoni as Mathesar the commander of the Thermians (his laugh alone cracks me up), Daryl Mitchell as Tommy Webber/Lt. Laredo (he gets so excited when he realizes he can actually fly the spaceship) and Justin Long is perfect as the ultimate geeky fan Brandon. Especially when he exclaims 'I knew it!' to Nesmith/Taggart just seconds after denying the existence of the real Protector.

This movie is really funny and take it from me, you needn't be a sci-fi fan to enjoy it. Great pacing and exquisite timing are two of the most important ingredients in creating a comedy. Galaxy Quest succeeds at both of these things.