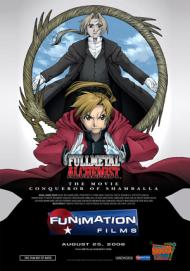 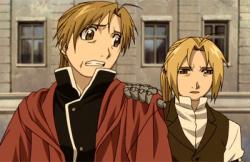 Fullmetal Alchemist was a popular television series that only ran for one season in Japan.  Based on a Magna comic book, it followed it to its conclusion.  It told the story of magic orphans Edward Elric and his younger brother Alphonse.  They are not called wizards but alchemists.  To make things simple just think of them as magic users.  After trying to raise their mother from the dead, Alphonse ends up losing his body, becoming a spirit that inhabits a suit of armor.  Edward loses an arm and a leg, which get replaced by metal limbs.   Edward then spends the rest of the season looking for a mystic stone to help bring his brother's body back.  The final episode has Edward succeed in bringing back his brother but as a result, Edward is sent to another dimension, without ever knowing if his brother's body returned.

Fullmetal Alchemist the Movie: Conqueror of Shamballa,  takes up where the television show left off.  Edward Elric is now on Earth, in Germany in the 1920s, while his brother is on the other side of the dimensional gate in Shamballa. Edward has become friends with his brothers Earthly counterpart, Al, who works with some rocket scientists.   Edward is not able to use his magic Alchemy powers on Earth.

A group of Germans discover Edward's world and plan on opening the gate to Shamballa.  They capture a dragon that had previously came from Shamballa and use its magic prowess to open the gate.  The Germans send some men in suits of armor into Shamballa to explore it.  Alphonse destroys them and sends an empty suit of armor back through the gate with a bit of his soul in it, which allows him to talk to Edward for a limited amount of time.  After learning that his brother is whole again and that the Germans are planning a full scale invasion of Shamballa, Edward must try to stop them.

The chick leader of the Germans ends up leading the assault on Shamballa.  She transmutates into some weird looking female creature with sludge looking tentacles.  The battle scenes on Shamballa are exciting as those with alchemy (magic) powers battle the invading force and science fiction crafts coming through the gate.  Those scenes were also the least confusing.

Having not seen the television show, I had to rely on my Anime loving son to give me the background.  The characters were quite well rounded for him.  The almost reunion scene where Edward and Alphonse talk via the possessed robot was comically realistic.  Alphonse says, "You've changed, Brother! You've gotten taller!" Edward responds indignantly, "WHAT'D YOU THINK, THAT I'D STILL BE A RUNT AT EIGHTEEN YEARS OLD?"  Brothers!

One interesting aspect of the story was that it was set during the early years of the Nazi party, when they were little more than a group of unhappy citizen thugs.  Rudolph Hess plays a sizable role and Adolph Hitler makes a couple of brief appearances.  Of course the Germans (or anyone on Earth) at that time did not have the kind of technology shown.  One of the last lines of the movie is Alphonse talking to Edward, "Another great war is sure to start. That could be something that's unavoidable, huh? I wonder if it's something we should be getting involved with?"

I highly recommend you watch the television show before the movie.  The film does not stand on its own as a complete story.  Of course, I can only imagine that you would be inclined to watch the movie if you have already seen the show.  That, or your teenage son bugged you into watching it with him.