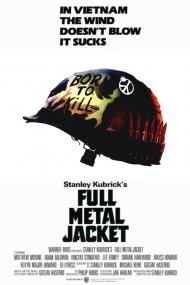 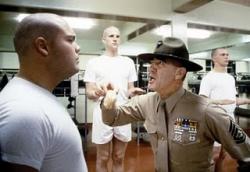 Full Metal Jacket was Stanley Kubrick's final masterpiece. The only other film he would direct is the all but forgotten Eyes Wide Shut. In his nearly 50 year career behind the camera, Kubrick only directed a dozen films, but many of them are cinematic staples. Full Metal Jacket is one of my favorites.

It follows a marine through boot camp on Paris Island, and into combat in Vietnam. At first glance it is a comedy/drama as the recruits are harassed and trained by their abrasive company commander, Gunnery Sergeant Hartman. "I bet you're the kind of guy that would fuck a person in the ass and not even have the goddamn common courtesy to give him a reach-around." The second half of the film is an action/drama as the men fight the enemy and watch their comrades die.

That is how I first viewed it many years ago. Watching it now I see that it has so much more to say. The recurring theme in Full Metal Jacket is the relationship between friend and foe, right and wrong. It resonates throughout the film from start to finish. Joker wears a peace symbol on his jacket and a helmet that reads, "Born to kill."

While in boot camp Gunnery Sergeant Hartman is the antagonist, riding and berating the men to no end. "It looks to me like the best part of you ran down the crack of your mama's ass and ended up as a brown stain on the mattress." You hate him along with the recruits. One recruit in particular sees him as the enemy and decides to do something about it.

However, he has a means to an end. His final speech to his men explains it, "Today, you people are no longer maggots. Today, you are Marines. You're part of a brotherhood. From now on until the day you die, wherever you are, every Marine is your brother. Most of you will go to Vietnam. Some of you will not come back. But always remember this: Marines die. That's what we're here for. But the Marine Corps lives forever. And that means YOU live forever." He may have been a dick to his men but he is preparing them for far worse things than himself. He did what he did to toughen them up.

In Vietnam we see even more contradictions. Joker remarks that they are there to help the South Vietnamese, yet they rob from the Americans, and act ungrateful. His job at Stars and Stripes is anything but journalism as he is instructed to put positive spins on every story. The prostitutes that will do "anyting you want." for 10 dollars are the most honest people in the movie.

In one scene, a white soldier calls a black soldier a "nigger" as they are deciding who gets her first. A few scenes later the black soldier gets shot by a sniper and it is that same white soldier who wants to go save him. At first you think they are at odds, but then you see otherwise.

The theme comes to a brilliant climax at the end when they finally get the sniper. Joker stands over the dying sniper and must decide what to do. His sense of what is right and what is wrong has become completely blurred, and you see the confusion on his face. You must decide for yourself if what he did was the right decision.

Gunnery Sergeant Hartman's rants to the new recruits are legendary. R. Lee Ermey was nominated for a few awards for this role, but did not win anything big. You will remember him. "There is no racial bigotry here. I do not look down on niggers, kikes, wops or greasers. Here you are all equally worthless."

Full Metal Jacket stands the test of time. As I watched it, I could not remember when it was made. It could have been a new film. It is graphic and tense. The dialogue and imagery will stay with you long after the movie ends. Kubrick was a cinematic genius.

I went through basic training at Fort Jackson, South Carolina in 1986. The following year Full Metal Jacket was released. Although I was regular army and not in the marine corps, this film depicts the basic training experience more realistically and accurately than any other film I've seen. By far the first section of the movie is the best. R. Lee Ermey is great as the gunnery sergeant putting the men through their paces. Many of the comically insulting lines he spews at the recruits are words I heard spoken. He didn't exaggerate. The only unrealistic thing about these scenes is the fact that it seems as if he's the only drill sergeant on the base, when in truth there would have been several others working different shifts.

Vincent D'Onofrio gives an impressive performance as the put upon, mentally unstable Private Lawrence whom the sergeant mockingly nicknames Gomer Pyle. He gained 70 pounds for the role, thus beating the previous record held by Robert De Niro for Raging Bull. His performance goes far deeper than a layer of fat however. He is especially good in his final scenes where he's gone completely mad. I have never seen a look of more pure evil than the one on his face in the scene in the bathroom. Clearly Kubrick is saying that the line between hardened soldier and psychopath is a fine one.

The theme of Full Metal Jacket (the title refers to the round of ammunition used in the M-14 infantry rifle) is decidedly antiwar. The opening sequence shows the level of cruelty needed to toughen up recruits in preparation for battle. There are casualties of war even before the men ship overseas. Once the story moves to Vietnam itself we see the full futility of this war. This is best summed up by the conversation Joker has with a colonel he meets in the field. The colonel's final words to him are, “Son, all I've ever asked of my marines is that they obey my orders as they would the word of God. We are here to help the Vietnamese, because inside every gook there is an American trying to get out. It's a hardball world, son. We've gotta keep our heads until this peace craze blows over.” And I think the fact that Kubrick ends the movie with the soldiers singing the theme to the Mickey Mouse Club is clearly not meant to be complimentary to the American war machine.

Kubrick goes against the grain of most Vietnam war movies by showing urban conflict rather than the usual scenes in the jungle or rice fields. The final sequence with the sniper is tense and masterfully staged. The dialogue is brilliant. As Eric pointed out, it demonstrates the stupidity of political correctness. These men insult each other with disparaging labels yet risk their lives to save each other. A perfect example of actions speaking much louder than words. As for Joker's decision as he stands over the dying sniper? Given the situation I don't think it's a simple matter of right or wrong. But clearly he does the most humane thing.

In the Vietnam War film oeuvre Full Metal Jacket is overshadowed by Apocalypse Now, The Deer Hunter, and Platoon, but for my money it's the most entertaining of the four. Of all Kubrick's films, with the possible exception of The Shining, this one probably has the greatest mass appeal. I am in complete agreement with my brother. Full Metal Jacket definitely stands the test of time.