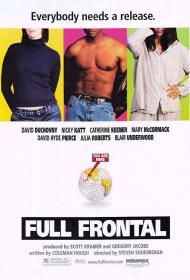 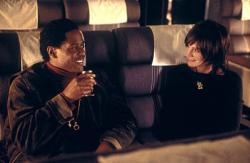 Hugely successful director Steven Soderbergh's latest movie is a pseudo-indie mess. The plot involves a movie, within a movie, within a movie. It is all rather convoluted and uninteresting. What is supposed to be a funny satire on the Hollywood movie world is at best dull and at worst completely annoying. I don't mind a movie shot on video. Tad Pole is one example where this medium works to advantage. In Full Frontal it doesn't. I mean who wants to see Julia Roberts and Blair Underwood looking this unglamorous? And it is compounded with purposely out-of-focus shots and shaky camera work.

The story flits around between a dozen or so characters in and around LA. All of them will come together for the movies climax, which takes place at the 40th birthday party for a powerful producer (played by David Duchovny). We see writers, directors and actors and supposedly how things work behind the scenes. Roberts and Underwood play famous actors. Half the time they are shown as characters making a movie and half the time they are just playing stars. Get it?

Apparently this movie was thrown together in a hurry. It shows. It does have a few funny lines and humorous moments but they are few and far between. In terms of comedic pacing and timing Preston Sturges is sorely missed.

The very talented ensemble cast gives it everything they've got. David Hyde Pierce and Catherine Keener are especially good. But it just doesn't work.