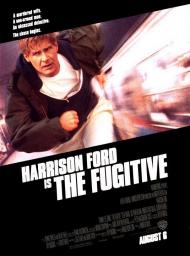 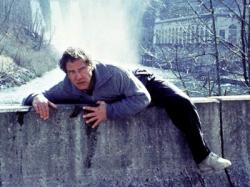 Harrison Ford in The Fugitive.

Although he will always be remembered as Han Solo or Indiana Jones, it is as Dr. Richard Kimble that Harrison Ford found his greatest role. Based on an old television show, Ford makes this role his and does some of his best acting.

Falsely accused and found guilty of brutally murdering his wife, Kimble is sentenced to die. After a well filmed and amazingly tense sequence, he ends up escaping from a prison bus transporting him. He then heads back to Chicago to find the real killers and clear his name.

The Fugitive has several great action sequences; the bus/train wreck, the chase and dam jump, the escape from the correction facility and consequent pursuit through the St Patrick's Day Parade. What makes these more than just action sequences are the fine performances of Ford and Tommy Lee Jones.

Ford, better than anyone, plays an average Joe who finds himself caught up in something diabolical. Here, his average Joe is a vascular surgeon who ends up being an action hero. It is Ford's specialty role. He also does a variation on this character for Air Force One. What makes Ford good at it, is that he never becomes a superhero. He doesn't just happen to know karate or any other such nonsense. He is an extremely vulnerable character.

Tommy Lee Jones threatens to steal this movie. He has all of the good lines. He earned a supporting actor Oscar nomination for this role. Within the first have hour of the film, Jones spouts such memorable lines as "Think me up a cup of coffee and a chocolate donut with some of those sprinkle on top." "We got a Gopher." "The guy did a Peter Pan off of this dam, right here." "Get a cane pole, catch the fish that ate him." The most memorable line in the movie though, is a brief exchange between Ford and Jones inside the dam. Ford says, "I didn't kill my wife." to which Jones responds, "I don't care."

Great acting, great action and great lines. But wait, there is more. The score is very good as well. I watch this movie every March. The last time I watched it, I found myself humming along to the background music. It is some very contagious music.

Director, Andrew Davis needs some kudos here. He keeps the pace moving along very well. The entire look of the film is March drab. That sad time of the year when the snow has melted and spring has yet to produce a blossom. The opening shots of Kimble's wife's murder are quite unsettling. Then Kimble becomes a fugitive. Then, he becomes a detective. His direction keeps the movie on a smooth pace no matter which direction it goes in. Davis does not have a distinguished list of directed films. His most recent have been Holes and Collateral Damage. However, his work on The Fugitive is a flawless piece of cinematic entertainment. 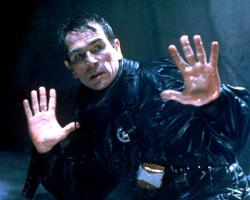 Tommy Lee Jones in The Fugitive.

I completely agree that this is one of Harrison Ford's finest acting jobs. What makes it even more impressive is that he spends much of the movie on his own and must convey his emotions without saying a word. He is particularly effective at conveying the shock and dismay of a man who is trying to not only grasp the fact that his beloved wife has just been murdered, but that he is now being accused of killing her.

There's another scene later in the film where Ford is equally good without saying a word. He's staying in an apartment in a sketchy part of town when the police arrive and he's trapped in the basement with panic written across his face. What can he do? And then there's the visible sense of relief and the renewed conviction that flickers through him, when he realizes that they're not there for him.

Jones is of course also brilliant as Gerard, the detective hot on Doctor Richard Kimble's trail. He's funny, but also threatening and good at his job. Both he and Ford are so good that they--thanks also to a strong script--create that rare thing where you're actually rooting for both the pursued and the pursuer.

Along with Jones' Oscar win, The Fugitive was also nominated for six other awards, including Best Picture and Best Score. Although neither Ford or director Davis were nominated for their work on this film, they both should have been. I know I'm a hell of a lot more likely to rewatch this movie than I am to ever want to see The Remains of the Day or The Piano again, which were also nominated that year.

Normally I'm the first person to complain about a movie's length, but despite this one running over 2 hours, I wouldn't begrudge a minute of it. The pacing is terrific and the action always kept on a realistic level, even when it's clearly over the top, such as Kimble's Peter Pan act at the dam.

The action and the humor are a big part of what make this movie so entertaining, but it's the performances that keep you emotionally invested in the outcome. You desperately want Doctor Richard Kimble to prove that he's innocent.

He's such a box office star, even though he hasn't made a decent movie in years, that it's easy to forget that Harrison Ford can also deliver a solid acting performance, but that's exactly what he does here. 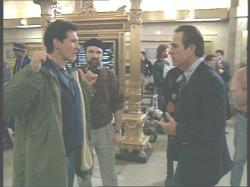 Harrison Ford and Tommy Lee Jones in The Fugitive.

As a movie buff I'm almost embarrassed to admit that I'd never seen this movie before. I remember when it came out thinking what a dumb idea it was to make a movie version of an old television series. Looking back I think this was the beginning of the end of original ideas in Hollywood. Many other series have now been made into movies to go along with the current plethora of remakes and sequels filling movie screens. So although its legacy may not be that positive, The Fugitive remains an excellent motion picture.

As both my brothers pointed out, Harrison Ford is terrific as Dr. Richard Kimble. We all know what an accomplished action star he is but here he proves his mettle as a thespian. His frustration, sorrow and anger all show on his face in a subtly produced series of expressions. Director Andrew Davis came up with the brilliant idea of having Ford begin the movie sporting a beard and long graying hair. That way he could change his appearance without putting on a disguise but instead by morphing into Harrison Ford.

I agree that Tommy Lee Jones is also superb and he gets the best dialogue; much of which was improvised. For example, the line Eric quoted where he answers Kimble's claim of innocence with the, “I don't care.” retort was originally written in the script as,“That isn't my problem.” Jones came up with the new, and better line, while filming the scene.

If you are going to make an action/suspense movie that runs over 2 hours this is how to do it. The pacing is such that you don't even notice the length of the picture. I kept wondering what Kimble was going to do next. Sure the action goes over the top a few times but that goes with the territory. The Peter Pan dive off the dam is the most obvious example but they address this in the script by saying that only one in a million guys would survive the fall. Of course Kimble (as Gerard and the audience both know) is that one in a million.

Even though it took me 19 years to see The Fugitive I have no problem admitting my initial assumptions about it were wrong. It was a good idea to remake this old television series into a big budget summer movie as the results so clearly demonstrate. Now if only Harrison Ford can make one last great action movie before heading off into the cinematic twilight.