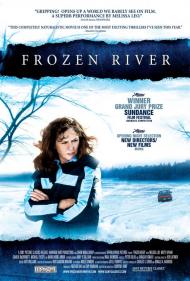 Melissa Leo might not win the Best Actress Oscar but her character deserves the worst mother of the year award.

There are some moments of tension in this movie and it kept me interested throughout most of it. At the same time though, I felt no sympathy for any of the characters in it. It's also a fucking depressing movie and I'm not someone who enjoys watching depressing movies. I can never see the point. Give me anything in a movie except that.

I'm also not someone who believes that people are a victim of life. Sure bad shit happens to us all at different times, but that's never an excuse. It's how we handle the shit that life throws at us that proves what kind of people we are. Melissa Leo (who was nominated for an Oscar for this role) as Ray Eddy is married to a gambling addict, living in a trailer and working at a dead-end job at what appears to be a dollar store. She's also the mother of two sons. We're supposed (I think) to feel sorry for her. To pay for her new double-wide home, she turns to smuggling illegal immigrants across the frozen river between Canada and the USA. We're supposed (I think) to understand her reasoning for doing this. Well I don't feel sorry for her and I don't understand her reasoning. She's the main character in the movie and I don't like her, not a good sign. A lot of shit has happened to her, but her only course of action to deal with it is smuggling.

Ray meets Lila, an Indian girl who lives on the nearby Mohawk reservation in upstate New York. Lila is a smuggler and she convinces Ray to help her. Lila has connections and using them she and Ray drive across the frozen river to pickup various people and smuggle them back in the trunk of the car.

The smuggling scenes are the best of the movie as they're filmed with real tension and a sense of danger. During one of the crossings, Ray, nervous of carrying two Pakistanis, tosses their bag out onto the ice. When she drops them off at their destination she discovers that the bag actually contained their baby and she and Lila race back to see if they can find it.

What I dislike about the movie really comes down to my dislike for Ray. She's a horrible mother who leaves her older son to take care of his younger brother. She can't afford to buy them any food besides popcorn and tang and yet she seems to have money for cigarettes. Her solution to providing for them is to break the law. Her oldest son is following her lead behind her back and she is totally unaware. Is she a realistic character? Probably, but that doesn't mean I want to see a movie about someone like this.

This is a movie I would never have watched if it hadn't been nominated for an Oscar and one that I will never watch again. I know certain people will say not every film should have a happy ending and be filled with beautiful people, and I'm fine with that. But what's the point in watching something this depressing? I mean at the end of it all, what's the point? 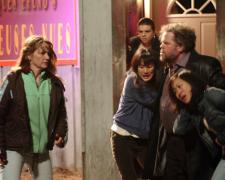 Ray gets in over her head.

Ray is a very realistic character, and I did pity her. She is in a bad situation. What help could she get? She is married. Most assistance programs are set up to help single mothers, not married women. Of course I am not condoning her crime, but I understand her doing it. Lila leads her through the first delivery without a hitch.

Although the crossing scenes are the most tense, I related more to her when she was dealing with her sons. The youngest is distracted by Christmas and the prospect of a new home. The teenager is hurting from his fathers abandonment, and blames her as a way to direct his frustration. Those scenes are some of the most true to life that I have ever seen on film.

This movie does want you to cheer for Ray, and it succeeds most of the time. One early scene was a bit too manipulative. The driver arrives with half of their new module home and asks for the down payment. When she cannot produce the $4,000, he drives away with it as her youngest son runs crying after it. First of all, who does business like that? What business expects a driver to collect 4 grand? Long before that home ever left the lot she would have had to have given him all the down payment. The scene makes no sense and is thus the most unrealsitic part of an otherwise sincere slice of modern middle America. 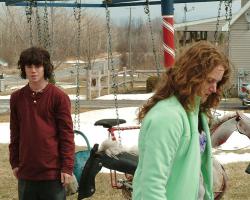 After reading my brothers' reviews I had to double check the names on them. The first -more judgmental- review sounds like my brother Eric, and the second -more tolerant- one sounds more like Scott. I'm definitely with Eric on this one. Sure these characters are flawed but who isn't? And these flaws often make for a more interesting story, as they do here. It's easy to sit back and question her choices but clearly this is a woman who is doing the best she knows how under extremely challenging conditions.

Neither of my brothers mentioned the theme of Frozen River, which is a mother's love for her children and to what desperate ends she will go to care for them. Ray's husband abandoned her a week before Christmas with two kids and no money. She has no time to go out looking for a new job at this point. She needs cash and quickly. I not only understood her plight but I felt very deeply for this woman. Melissa Leo gives a heartbreaking performance that is both tough and tender, and oh so human.

She is matched by the wonderful performance of Misty Upham as Lila, the American Indian woman who starts off as Ray's antagonist before becoming her partner in crime, and finally, her friend. Like Ray, Lila is a mother. She is trying to get her infant son back from her mother-in-law, who has kidnapped him. The tribal leaders on the Mohawk reservation do not concern themselves with these issues, so she has no legal recourse. Together Ray and Lila help each other out of their desperate situations.

Along with the two female leads, Charlie McDermott deserves a mention for his very believable turn as Ray's oldest son T.J. Like Eric, I found the scenes of the Eddy family at home to be some of the most naturalistic and emotionally resonant I've ever seen. First time writer/director Courtney Hunt has crafted a deeply moving story about the human condition, and the universal ties that bind us. I was hoping for a happy ending. I won't give it away, but it manages a very satisfying conclusion while staying completely true to all that has come before. A minor masterpiece.