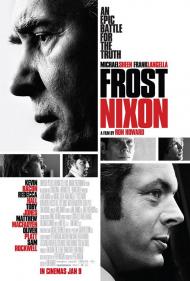 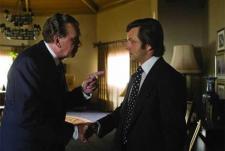 Nixon and Frost engage in a verbal boxing match.

As we move slowly away from the 20th century, it's becoming clearer that the two biggest moments in American Politics during the latter half of that century were the Kennedy assassination and the Watergate Scandal. Certainly those are the two presidents about whom the most movies have been made. And with Frost/Nixon, which covers days of interviews between David Frost and Richard Nixon, here comes another one about Nixon and Watergate. At this point you might have cause to wonder, is there anything new that can be said about it? Pleasantly though, this movie doesn't put meaning ahead of entertainment and therefore delivers its message even more effectively.

What Frost/Nixon is, above all else, is a boxing movie. Of course in this movie all of the punches and jabs are delivered verbally. This is strictly a cerebral fight.

In one corner you have British talk-show host and celebrity jet-setter, David Frost. He began his career as a comedian (during which he helped to launch the career of several future Monty Python members, although that fact isn't revealed in the movie), but moved on to hosting his own talk-shows around the world where he interviewed celebrities and mainly did fluff pieces; not what you would ever call a hard-hitting journalist. He seeks out an interview with ex-president Richard Nixon for reasons that are never laid out completely. It would seem that he challenges Nixon to this verbal duel for the purpose of making people take him more seriously, but this is never explicitly stated.

In the opposing corner you have a disgraced Richard Nixon. Nixon's motivation is clear. Frost is paying $600,000 for the interview and Nixon wants the money, but more importantly he sees this as his chance to redeem himself in the eye's of the American people. It's a chance for him to tell his side of the story. He even has dreams that somehow he can use this interview to bring himself back into politics from the exile he has been placed into.

Nixon, the wily old veteran, wins the first rounds of the fight. He disconcerts Frost several times in humorous ways. Seconds before the camera comes on he asks, "Did you have a good night last night? Did you do any fornicating?" He rambles in his answers, dominating the interview and never giving Frost a chance to fight back.

Of course, like any good boxing movie, Frost comes back. There's even a short montage sequence of Frost preparing for the final interview that is only missing an 80's power ballad to make it complete.

Michael Sheen as Frost and the rest of the supporting cast are terrific, but this movie is stolen by Frank Langella as Nixon. In real life Nixon may have lost this fight, but in my mind, there's no question that Langella wins this fight. His portrayal is hardly what you would call a direct imitation, and yet he embodies the character perfectly. He does such a good job that you end up feeling sympathetic for him. He deserves the Best Actor Oscar for sure and if he isn't at least nominated for it than there is no justice in Hollywood.

In case you're thinking that a movie about an interview sounds pretty boring, rest assured that it's not. The movie is peppered with enough humor and characters so that you never get bored. This is that rare movie that is award-worthy and yet truly entertaining at the same time.

Tricky Dick getting some advice from Jack Brennan.

Both Frost and Nixon wanted this interview to happen for the same reason, respect. Frost wanted to be taken seriously as a interviewer, while Nixon wanted to remind the American people that his legacy should not be solely dominated by the Watergate scandal. As Nixon told Frost during an odd phone call that may or may not have actually taken place, they are both, “Looking for a way back to the sun.”

Although their goals were the same, these two men were very much opposites. The party scene is a great example of the contrast between the two men. Frost had a glitzy birthday bash. Hugh Hefner was walking around with some Playboy bunnies. Neal Diamond was serenading the crowd. Meanwhile, Nixon was playing his piano to a semi-formal, silent group in his home.

Frost and his research team do not simply want an interview. They want to get Nixon to admit and apologize for Watergate. Nixon wants to distract from Watergate and put himself in the best possible light. Each goal obviously conflicts with the other. However, when one side has the truth and the other a lie, the winner of any debate is never in doubt.

Due to Langella’s performance, I felt sorry for Nixon. He lied to protect himself and those around him. Is there a President who has not lied, left out some information, or at least spun a story to fit his need? Of course not. Nixon’s unique problem was that he got caught. Langella’s confused looks and slowed actions create some sympathy for Nixon, and as such is this movies greatest accomplishment. 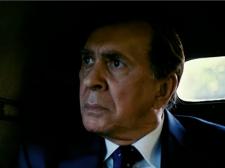 Frank Langella should have won the Oscar.

As my brothers already pointed out, Frank Langella is superb as Richard Milhous Nixon. It is one of the best portrayals of any real person that I have seen. Without imitating Nixon he convinces you that he is Nixon and at the same time makes him a fully fleshed out human being. By contrast Michael Sheen seems to be impersonating David Frost and as a result (and because of the script) Frost is not as fully realized as a person as Nixon. His motivations are less clear at any rate.

Watergate was such a watershed moment in American politics. As they point out at the end of the movie, every political scandal (and just about every other kind of scandal too) is now immediately given the suffix “gate”. This was also the beginning of the mass media demonizing of politicians by the opposing party. This destructive phenomenon has plagued nearly every president since Nixon, with Clinton and the younger Bush being the two who got it worst.

Frost/Nixon is entertaining and thought provoking. The editing is well done and the time period of the 1970’s is faithfully recreated. In fact it ranks among Ron Howard’s best movies.