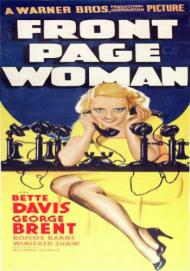 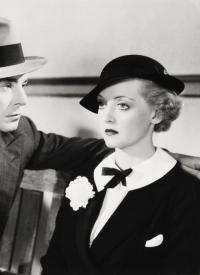 After her groundbreaking performance the year before in Of Human Bondage, a lightweight B-comedy like Front Page Woman was not exactly the kind of script Bette Davis yearned for. Always the pro, she makes the most of it, delivering a smart, tough performance as early feminist Ellen Garfield. In this battle-of-the-sexes newspaper romp she goes toe-to-toe with her most frequent male costar, George Brent. This was their fourth picture together and as always they share a natural rapport.

They play rival journalists trying to out-scoop each other. Curt Devlin wants Ellen to quit her newspaper beat and become his bride. Ellen wants respect. She's a modern dame who considers herself equal to any man. The momentum of the story shifts back and forth as Curt and Ellen get more and more desperate to top each other.

Michael Curtiz directs with his usual effortless craftsmanship. His editing is seamless and his camera technique remains fresh and modern. The reliable Roscoe Karns plays Toots, Devlin's photographer and wise-cracking comic sidekick. His humor comes off a bit on the corny side these days but it was standard fare in the 30s. Singer Winifred Shaw makes a somewhat bland femme fatale and J. Carrol Naish plays her brother.

The script suffers from two things. One, it just isn't funny enough. And two, the character of Ellen Garfield is inconsistently written. She's supposed to be a crackerjack reporter but she lacks most of the qualities necessary for the job. She faints early on in the story after witnessing her first execution, she lacks street smarts and is easily tricked. The conclusion redeems this angle of the plot a bit though since it seems to suggest that Ellen is a fairly fast learner and she does get the last laugh.

Bette Davis wears many form fitting outfits with cunning little hats and she smokes in nearly every scene. Her make-up is heavier than she usually wore it. The studio was still trying to force her into a glamor mold for which she just wasn't suited. The handsome George Brent brings his relaxed charm to the manic proceedings. He remains underrated as an actor. He was equally effective at playing both comedy and drama.

There are two small roles that I would like to mention. The Japanese houseboy, Fuji (Miki Morita) gets one of the best jokes. When questioned about a murder he says, “I don't see no knife, not even when I remember with my imagination.” It may not be politically correct but it's funny.  The other character is the only other female reporter shown in the film. She dresses very mannishly with a suit coat and tie. Her name is Nell Bonnett and she was played by Grace Hayle. She was often cast in bit parts playing fat women. Nell is not directly identified as a lesbian but she is about as close as Hollywood could come to that admission at the time. George Brent's character quips about her that she makes him feel effeminate by comparison and Roscoe Karns insults her looks to her face.

Front Page Woman is a fast-paced feminist farce. The plot borders on being silly at times but it proves that although Bette Davis and George Brent most often teamed up for high-melodrama they were both adept at comedy as well.