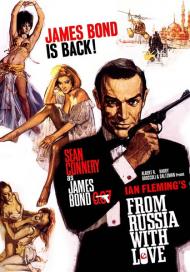 Sean Connery has often mentioned this as being his favorite of all the Bond films.

From Russia with Love is fairly unique among the Bond films. It is easily the most realistic of any of the movies and it more closely follows the plot of the original Ian Fleming novel than any other. A few other movies later in the series would come close to matching it, (On Her Majesty's Secret Service and For Your Eyes Only) but never with quite the success of this one.

As the second movie in the franchise, From Russia with Love also continued the development of the Bond formula. It has a pre-credit sequence, silhouettes of women during the opening credits, Q makes his first appearance and provides Bond with his first gadget; all elements that became standard in future Bond films.

This time around Bond is sent on the rather mundane task of collecting a Russian decoder machine from Istanbul. Tatiana Romanov, a cipher clerk in the Russian Consulate there has sent a letter to MI6 saying that she wants to defect and will bring the decoder machine with her if James Bond will come and collect her and the machine. She claims to have read all about Bond in the Russian files and fallen in lover with him. The truth is that it is really S.P.E.C.T.R.E. who are behind the idea and what they really want is to get their hands on the machine and get their revenge on Bond for his murder of Dr. No in the previous film (one of the few times in the series where an earlier movie is mentioned).

One other thing the series does for the first time with this movie is run too long. The movie opens, not with Bond, but with S.P.E.C.T.R.E. as they're making their plans to kill Bond. 007 doesn't appear until nearly 15 minutes into the movie. This not only adds to the running-time, it also defeats any sense of mystery. Bond doesn't know whether or not he's walking into a trap when he goes to Istanbul and the audience shouldn't either. It could have added to the suspense. There's also a scene later where two gypsy women fight over a man. A scene that I'm sure was titillating at the time, but now seems oddly out of place and unneccesary.

Daniela Bianchi, while quite pretty, is a fairly weak Bond girl. She's duped easily by S.P.E.C.T.R.E. and even Bond slaps her around at one point when he thinks that she's connected to a friend's death. Robert Shaw, on the other hand, makes a great strong-arm villain. As the mostly silent, but quite deadly Red Grant, he menaces throughout the film and the fight between he and Bond on the Orient Express is a classic.

Connery, meanwhile, continues to make the part of James Bond his own. In interviews he has stated that this is his favorite of all the Bond films and it's easy to see why. He does some of his best acting of the series here and this was still before the gadgets had taken over and he's the star of the show. Something that would begin to change with the next entry in the series, Goldfinger.

Sean Connery in From Russia with Love.

From Russia with Love finds James Bond on a very realistic note. It always feels like he is in danger. He never comes across unconcerned like Roger Moores Bond, “Can you play any other tune?”or impervious like Daniel Craigs Bond. “I have a scratch-down there. Would you mind.” Please! Connerys Bond has no super senses or special equipment. He plays up to this blond bimbo to get the decoder machine. He gets bested by Grant, and has to make up their escape as they go. Considering the time period, Bond is genuinely on his own in the field. He has no satellite hook ups and cell phones to call MI6 for help.

I took Scotts advice, and I started the movie on the first scene James appears in. I missed nothing by not seeing the introduction of Grant, Klebb and Romanova. “M”s brief explanation of what Bond’s assignment is and Bond’s scene on the train with Grant, is enough to explain all the plot details. It also helped shorten the film to a proper length.

I have often joked with Scott that the newer Bond movies have sometimes too elaborate of plots. From Russia with Love, minus the pointless 15 minute introduction of the bad guys, is a straight adventure film that rarely strays from Bond. It also has some decent jokes that are not cringe inducing. When Bond is recording Romanova describing the decoder, they end up talking about sex. Later, a titillated group of older men and Moneypenny listen to the tape.

Scott mentioned that Connery is good here and I think that has as much to do with the script as it does his performance. Bond spends most of the movie reacting to what is going on around him and only in a clutch does he take charge to save his ass, such as in the climactic boat chase. Also of note, I wonder if he got stuck wearing that stupid sailor hat in the boat scenes because the wind did not agree with his thinning hair of toupee?

The latest Bond films should learn much from these earlier movies. Bond refuses to drink Dom Perigon until it is cold enough. He flirts with Moneypenny. By his second movie, the charm of Connerys James Bond is his sophisticated air and enjoyment of his job and its sexual perks. By Craigs second movie, Bond is a nuetered, heart broken thug out for revenge. I miss the old Bond! 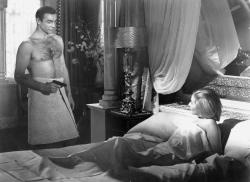 Sean Connery and Daniela Bianchi in From Russia with Love.

I had never before seen From Russia with Love. I’ve never been the huge fan of the series that my brothers are. Now that I have seen it, I must say that along with the preceding Dr. No and subsequent Goldfinger the franchise was off to a great start; and I understand just why Bond fans revere these early movies. Connery’s OO7 is the perfect mix of suave sophistication and testosterone driven machismo.

My brothers both complained about the running time but I didn’t find it to be that long. It ends well before the 2 hour mark and I didn’t mind the opening scene showing the conniving villains. I do agree with Scott about the fight between the two gypsy women being completely unnecessary and intended only to titillate.

I’m surprised that neither of you mentioned the obvious lesbian overtones in the scenes between Daniela Bianchi and Lotte Lenya. Lenya’s Rosa Klebb is a big old dyke. There’s nothing subtle about her at all. Watch the way she seductively caresses Tatiana Romanova’s face.

The scene where Q shows Bond his specially designed attaché case is a classic moment that has been copied a million times, not just in later Bond movies but in rip-offs and spoofs alike. By the end of the movie every gadget in the case has been employed by the British super agent.

I agree about the sense of danger. As soon as James arrives in Istanbul it never lets up. The plot is very reality based. There is not much over the top action. The scene with the helicopter and the finale involving boats being as big as it gets. This James Bond is super cool without being super human. He gets a great line upon discovering that Robert Shaw is a bad guy. “Red wine with fish, I should have known.”

Diamonds Are Forever will always hold a special nostalgic place in my heart but I quite agree with Sean Connery. From Russia with Love is the best Bond movie.