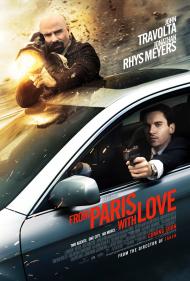 Lets hear it for the French! Pierre Morel and Luc Besson make some very in-your-face action films. Besson is famous for Le Femme Nikita and The Transporter, while Morel directed Taken. In From Paris with Love, the bad guys are honest to goodness middle eastern terrorists. No bullshit Irish guys. No outdated Russian agents. No South American drug lords. Finally, a film with a modern portrayal of a terrorist.

Directed by Morel, and based on a story by Besson, From Paris with Love is about an American suit, James, who works at the Paris Embassy as assistant to the Ambassador. He has dreams of being a covert agent. He does small secret jobs, such as provide vehicles for agents and changes their license plates. One day he is given the assignment to get an American operative, Charlie Wax, through customs, and be his partner for the duration of his mission in Paris.

Charlie is an old pro, who thinks nothing of killing. In fact, James estimates that in the first twenty four hours of being together, he killed an average of one person per hour. James is uncomfortable with doing the killing himself. In one scene, Charlie tells James that if a bad guy comes through the door he is to, "Shoot the fucker." James does not do as ordered, "I'm not gonna shoot him Wax." Two men get in and start kicking the crap out of James. Charlie lets it go on for awhile before saving him. "Next time I tell you to shoot the fucker, shoot the fucker!" The best lessons are hard learned.

With Pakistani terrorists and suicidal bombers wearing explosive vests, From Paris with Love is action packed and very topical. Just moments ago I heard a report on the news of some American soldiers being wounded by a suicide bomber near the Pakistan border.  Besson and Morel know how to create tension and maintain it. It is what makes an action film exciting.  Having some middle eastern bad guys get theirs, is gravy on an already satisfying meal.

The problem with From Paris with Love, besides the James Bond title knock off, is that one scene should have been cut. It is when Travolta eats a burger and tells Rhys Meyers that it is called a Royale with Cheese. It is a nod to Travolta's famous scene from Pulp Fiction. Unless you're making a Hope/Crosby Road movie, you never remind your audience that they are watching actors. It removes them from the fantasy, and ruins the movie experience. 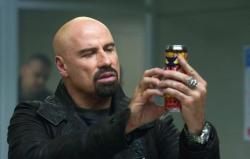 John Travolta is badass old-school in From Paris with Love.

Eric you seem to take an inordinate amount of satisfation from the nationality of the villain.  Their country of origin plays no real part of the plot at all.  They just as easily could have been Irish, Russian or Nazis even.  Hell, 90% of the villains are actually Chinese.  As for topicality, sure, there have been suicide bombers aplenty, but unless I missed something in the papers, there haven't been too many CIA operatives cutting a swath of dead bodies through Paris.  You make it sound as if this movie is in some way based in reality.

Nationalities aside, I do have to agree that this is a very fun and entertaining movie.  It's an old school, balls to the wall, pedal to the metal, adrenaline rush, roller coaster, edge of your seat, popcorn muncher of a movie.  The action starts very shortly into the story and once it starts, it doesn't stop until the credits roll.  Too many filmmakers forget to make movies fun and entertaining, but that's certainly not the case here.

Meyer and Travolta make a great team.  Meyer is the straight man and they give him just enough background to make him believable.  He's a bit stiffer and by the book, but he's believable in the part and so are his reactions.  What small amount of reality that there is, is provided by him.

It's Travolta though who dominates and steals the movie.  He seems to be having a hell of a good time with the part and it's completely contagious.  I don't normally think of him as someone who would play a tough guy, but he's terrific here.  He's so casually violent and yet so likable, thanks to partly the violence being so over-the-top that it's fantasy, cartoon violence.  It's bloody, but the whole point is to have fun with it, not take it seriously.

I do agree with you Eric that the Royale with Cheese line is a bit jarring, but it doesn't damage the fun.  It would take a lot more than that to stop the ride here.  I mean, c'mon, you've got John Travolta leaning out a car window on a Parisian highway with a Missile Launcher trying to blow-up some bad guys.  What's a cheesy bit of dialogue compared to that? 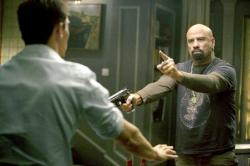 Jonathan Rhys Meyers and John Travolta in From Paris With Love.

I have to agree with Scott that the “Royale with Cheese” bit hardly takes this movie out of reality, since it was never anywhere near the real world anyway.  From Paris With Love is a complete action fantasy. Don't misunderstand me now. I thoroughly enjoyed it, but the level of violence is ridiculous to the point of being cartoonish. It starts off fairly grounded but once Travolta's Wax enters the picture it careens off into movieland never to return.

I mean how can anyone take the superhero-like actions of the 50-something, overweight Travolta seriously? The guy performs feats of strength, speed, dexterity and marksmanship that would put James Bond, Tarzan and Zorro all to shame. But he sure does seem to be having a ball and his bad ass attitude is certainly infectious. He makes this over-the-top, hyper-violent, cinematic-joyride fun. With his take no prisoners swagger, Travolta makes like an urban, 21st Century John Wayne (only with a bald head and goatee).

Now here's where I may surprise my brothers. As they both well know I am politically liberal. But when it comes to terrorists I am firmly militaristic. I hate it whenever the attacks on the World Trade Center are referred to as a “tragedy”.  An earthquake or tsunami is a tragedy.  A deliberate attack against innocent civilians is an act of war.

Therefore, like Eric, I found the movie's portrayal of Middle-Eastern terrorists to be refreshing. Not because all terrorists are Middle-Eastern (of course they aren't) but simply because they don't shy away from the fact that some are. Refusing to show them as terrorists is just as biased as always showing them as terrorists. Either way you are treating them differently based solely on race, religion or national origin, which, if I'm not mistaken, is the very definition of discrimination.

Travolta and Rhys Meyers are a good team. John Travolta has said in interviews that this is the one movie of his that he would like to see turned in to a franchise, with sequels such as “From London With Love” and “From Prague With Love” etc. If they ever do make a followup to this movie, I'll be in line to see it.