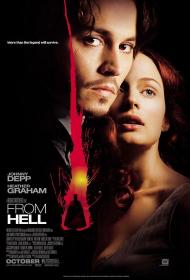 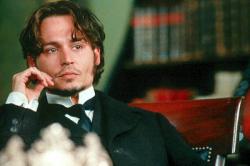 Johnny Depp in From Hell.

When I walked out of the movie theater after watching From Hell, I had one thing on my mind. What the Hell were they thinking? Only later when I discovered that the movie was based on a graphic novel did it sink in just where the movie was coming from. Because like a graphic novel, this movie is beautiful to look at, but has little substance. All Depp and no depth.

The story is a fast and loose re-telling of the Jack the Ripper saga, with the names and dates remaining the same, but with a back story that is far from fact based. I, while not a Ripper expert, have never read that the inspector in charge of the investigation was psychic for example, or that the royal connection to the murders, while often implied, has never been spelled out in quite this way. And if you know anything of the murders, you will recognize Heather Graham's characters name as that of one of the victims, but in this version... well, I suppose I shouldn't give things away that easily.

Visually, this is a gorgeous movie. Some of the shots of London's skyline at night are breathtaking. Amazingly so when you consider that the movie was shot on location in Prague! The shots of the Ripper, cloak billowing behind him under the old London gas lights, as he stalks the cobblestoned streets is very evocative and romantic in a serial killer sort of way. However, visuals have never been enough to carry a story, particularly when the movie stretches past the two hour point.

The cast bring their own problems to this movie. Johnny Depp is a good actor and while his accent isn't perfect at least it is consistent. Heather Graham on the other hand is a lousy actress and her accent, which is supposed to be Irish, is a fleeting, and inconsistent cockney, which is painfully obvious especially when she is surrounded by real British actresses who aren't putting on accents, but are just speaking.

The supporting cast includes such luminaries as Ian Holm and Robbie Coltrane. They both give solid performances. Holm as the doctor who seems to be aiding Depp's investigation, and Coltrane, who will soon be seen in the upcoming Harry Potter film as Hagrid, plays the Watson character to Depp's Holmes.

It is the resolution of this movie that left me feeling the most flat. The identity of the Ripper doesn't match the expectation and the depressing epilogue scene that follows while it might avoid the Hollywood cliché of a happy ending, is completely disappointing.

I suppose there are worse ways of spending two hours of your life than by watching this movie, but right now I'm hard pressed to come up with any. 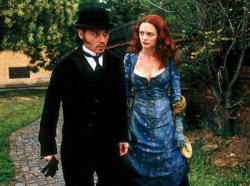 Johnny Depp and Heather Graham in From Hell.

Being one of Jack the Ripper's victims would certainly be a worse way to spend a couple of hours. This movie has several scenes literally filled with blood. The way in which some girls are cut or ripped is pointed out but thankfully never shown.

I have never been a huge fan of Depp's. He always seemed to be a pretty boy who was working too hard to be taken seriously. However, when I watched him next to Graham I realized what a fine actor he actually is. As Scott wrote, her accent her is truly bad. At least she has some nice boobs to distract you from her lousy dialect.

This overly long film has no one to root for. Depp as a drug addicted detective is supposed to be the hero. But he cares more about his drugs than life. Graham's prostitute comes from a picture postcard seaside village but chose to be a prostitute in the dirty back alleys of London where pimps threaten her life and a serial killer stalks her and her coworkers. Does the word "stupid" come to everyone's mind here?

Having been based on a graphic novel, From Hell could learn a few things from the far superior screen adaptation of the graphic novel Sin City. It has much better pacing and characters. Both movies end in similar fashion but Sin City's has an emotional punch. From Hell's ending left me cold and indifferent. 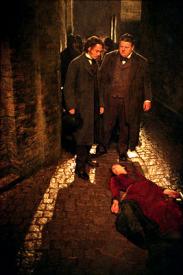 Johnny Depp and Robbie Coltrane in From Hell.

In the autumn of 1888 the world's first (and still most famous) modern day serial killer stalked prostitutes in the impoverished Whitechapel district of London. The story of Jack the Ripper has since been told many times in many various ways. This Hughes Brothers' adaptation of the Alan Moore penned graphic novel is a stylish yet ultimately disappointing rendition.

I found the editing distracting, the plot schizophrenic, and the acting bland. The ending is such a downer, but then so is the entire movie. They also took many liberties with historical fact. Inspector Abberline and Sergeant Godley did both work on the case, but separately, and in all likelihood never even met until the arrest of suspect George Chapman. Although I have no idea if the real Sergeant Godley quoted Shakespeare like he does in this movie, it is a matter of record that Frederick Abberline was neither drug addicted nor clairvoyant. He died in 1929 at the ripe old age of 86.

In other ways the movie is meticulously accurate in copying documented history. Working from authentic photographs, the murder scenes were recreated in painstaking detail. The words the police officer uses to describe the scene of Jack the Ripper's final kill were taken directly from the report of the actual crime scene. As far as the murders are concerned the Hughes brothers did their homework at least. Although the time-line in which they occurred was shortened.

I did enjoy a few elements of From Hell. The fact that they included real life historical figures like Queen Victoria and the Elephant Man adds a bit of fun to the dreary proceedings. For the hell of it see if you can spot Dominic Cooper making his movie debut as Constable #3. And I liked that they didn't shy away from the gruesome side of the story. But then what would be the point of that?

While the supporting cast fares better, the two stars are both bad. Depp is flat. His performance is one big yawn. And like Scott and Eric, I was put-off by Graham's ridiculous accent, and inability to convey a genuine emotion. From Hell does create a consistent mood. It has a dream-like quality, actually more like a depressed-nightmare quality. At any rate it nearly put me to sleep.