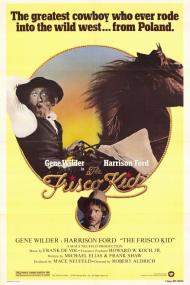 Gene Wilder and Harrison Ford in The Frisco Kid

The Frisco Kid holds a dear spot in my heart.  It was a favorite film of mine, as well as Scott's and Patrick's, when we were young.  It stars two of my favorite stars of the time and I watched it more than once.  I had not seen it in many years and was thrilled to find that even though I no longer consider Harrison Ford my hero, it still entertained me.

Gene Wilder at the very pinnacle of his fame, plays a Polish Rabbi named Avram.  He is sent to deliver a Torah to a Jewish community in San Francisco and become their Rabbi.  The head Rabbi who sends him says that San Francisco is, "...near New York."    Needless to say, Avram gets lost almost immediately.  He gets taken by some scoundrels who beat him and steal his money.  He has little encounters and adventures, such as working on the railroad.  He eventually meets up with a bank robber named Tommy, played by Harrison Ford.

At this point in his career, Ford was known as space pirate/smuggler Han Solo.  Tommy is very much in that same grain of character.  Even though they are opposites, Tommy and Avram meet and become best friends.  Avram has no clue how to do almost anything outdoors, while Tommy is nearly completely without morals.  At one point Avram narrates about Tommy, "In the Talmud, it says "find thyself a teacher" and this I have done. However, there were times I feared that he would find another pupil."

Neither is real bright but their strengths compliment each other.  Shortly after their first meeting, Tommy says to Avram, "You sure talk funny. Where you born at?" Avram responds, "Poland."  The clueless Tommy then says, "Oh. Is that near Pittsburgh?"

Their friendship is the heart of the film.  Tommy has to save Avram's ass, while Avram tries to save Tommy's soul.  One of the funniest moments is when they get caught by the Indians.  I always crack up when Avram tells the Indian Chief that God, "...does not make rain!"  Then it suddenly starts to pour and Avram quickly adds, "Of course... sometimes, just like that, he'll change His mind."

Here is where Avram proves to be the hero.  The Indian Chief is impressed with Avram's religious conviction.  Avram is a truly religious person.  His regard for the Torah often puts him in peril.  He abides by the strictest Hebrew laws, such as not riding on the Sabbath.  This causes great anxiety with Tommy, who at one point robs a bank and tries to get away while Avram refuses to ride his horse until the sun sets.

The Frisco Kid has lots of jokes and humorous situations.  It also tries to have some heart.   After a particular encounter, Avram believes he is no longer worthy of being a Rabbi, causing Tommy to give him a pep talk.  Their friendship is understandable, but the story never seems to completely get around it.  One minute they are arguing and calling each other names, and the next they are saving each other's lives.  The only thing more uneven than their attitudes toward each other is the films editing.  Avram and Tommy seem to jump around very quickly.  The worst moment being when Avram passes out with the Indians and wakes up in a monastery.

What I took note of this time around was just how good Gene Wilder is here.  He has his trademark moments of hysteria but also some quietly dramatic scenes.  Avram's love and devotion to his faith is quite admirable.  He puts his religious beliefs above all else.  This makes the scene where he doubts himself all the more effective.

The Frisco Kid has the perfect cast and a good story.  I can still quote many of the lines.  What it lacks is polish.  The editing is clunky and the production is a bit on the cheap.  The whole post filming stages seemed to have been a bit sloppily put together.   I wonder if other scenes still exist and what this film may have looked like had it a better editing job. 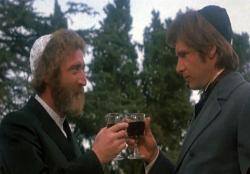 As Eric said, this movie was a favorite of ours when we were young. It was one of the films HBO kept in heavy rotation during the early 1980s and we watched it many times. I hadn't seen it in probably 25 years. I can't say that it completely lived up to my memories of it, but I still enjoyed it, both as a movie and as a nostalgic reminder of my childhood.

It was my view toward the comedy that had changed the most in the intervening years. I remember finding it all, particularly Gene Wilder, to be very funny. I didn't laugh nearly so much as an adult. There are still funny parts, but too much of it is just silly.

Eric mentioned the editing being sloppy and I agree, although I don't think it needs extra scenes, but less. Cutting 20 minutes from the running time would have certainly helped with the pacing. The story really picks up when Avram meets Tommy and it should have got there faster. The people on the train that Tommy is robbing, could have mistaken Avram for Tommy's non-existent partner and they could have hooked up in that scene. We didn't need to see Avram working on the railroad and the coincidence of Tommy running into Avram again in the middle of nowhere could have been avoided.

I always found the geography of the movie to be quite perplexing. Some of this is nitpicking, but at one point Tommy points south to Mexico and then says California is to his left. Later, when they reach the Pacific Ocean, he tells Avram that he needs to go North to reach San Francisco, but then in the next scene they are shown riding south. Apparently Tommy doesn't know his right from his left. When they stop in the town in the mountains during the snowstorm, Tommy says they have to go south next, implying that they're north of their destination, but when they leave the mountains they are in the desert, apparently somewhere in the southwest. There are even palm trees around the monastery where they stay. I'd really like to see a map of their zig-zag journey.

It was actually the heart of the story that Eric wrote about that I enjoyed the most. Wilder does do a very good job of acting and I wish they'd kept the tone a little more serious. Not turned it into a drama, but just played down the slapstick. The writers rely too much on jokes in scenes that could have been stronger with just a touch more drama. And speaking of sloppiness, Czechoslovakia is mentioned by Avram, even though it wouldn't be created for another 70 years at the end of World War I.

The odd couple relationship between Tommy and Avram is the film's strongest point and that's the angle that should have been played up more. In his autobiography, Gene Wilder wrote that the part of Tommy was written with John Wayne in mind. He claims that Wayne loved the script, but they couldn't work out an acceptable salary, and Wayne's health was deteriorating at the time and so it never happened. It certainly would changed the film's dynamic and few years earlier might have been a good idea, but by the late 70s, Wayne was a little long in the tooth for a part like this.

I was pleasantly surprised by how much I did end up enjoying The Frisco Kid. It's a not a great movie and there's plenty of room for improvement, but thanks to Wilder, Ford and a dose of nostalgia, I had fun revisiting it after all these years. 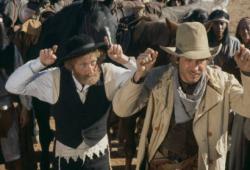 The Frisco Kid tells the unlikely (but cliched) story of two friends, one a holy man and the other an outlaw. While Harrison Ford gives a winning performance as Tommy, the movie succeeds on the talent of Gene Wilder. He is terrific as the naively trusting, kind-hearted, devoutly religious Avram. Like my brothers I loved this movie as a kid and still found plenty to enjoy today. Although I agree it isn't without its flaws.

This is really Avram's story. It begins with him in Poland and he briefly narrates his story as he sets out for America. Once arriving in Philadelphia he quickly encounters the two sides of human nature. He gets beaten and robbed by the scoundrels Eric mentioned. Then soon after is taken in, nursed back to health and given train fare by some Amish people he encounters and at first takes for Jews. The point is made that here in America, like everywhere else on the planet, there are good and bad people.

I remember as a kid anxiously awaiting Harrison Ford's first appearance. Tommy is the dashing type of character that young boys will naturally hero worship. His scene on the train is a bit of a tease, as Scott pointed out, because Tommy and Avram don't actually meet until later.

Although I enjoyed Avram's brief tenure working on the railroad it does contain some rather silly slapstick humor. It also demonstrates the diversity of 19th Century America as the Jewish Avram toils alongside black, Mexican and Chinese coworkers. The political correctness of the movie only went so far however as they had no qualms about casting Italian-American actor Val Bisoglio as Chief Grey Cloud.

Like Eric, I could still quote many of the lines even though, like my brothers, I hadn't watched it in a long time. I still laughed at the scene where Avram tries to catch a wild chicken, while chanting in a sing-song voice, “Chickie-chickie-chickie, come here. I don't want to hurt you, I just want to eat you. I just want to make you kosher.”

The scene on the beach - after the shootout with the bad guys - where Avram tells Tommy he is his best friend, remains as touching to me now as it was when I first saw it at 12 or 13. Tommy says he never had a best friend before, while Avram admits to Tommy that he is his only friend. This scene is the heart of the story and really sums up the idea of friendship in a few short lines.

Sure the story meanders a bit and the journey Avram and Tommy take is geographically erratic. Nevertheless, The Frisco Kid is quite entertaining. It's a silly little heartwarming tale about an unlikely friendship with just enough adventure thrown in for good measure. Every 12-year-old boy should watch it with a brother or best friend like Eric, Scott and I were fortunate enough to do.