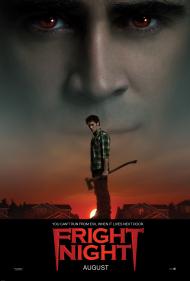 I was a fan of the original Fright Night when it premiered, however it hasn't aged all that well and so unlike a lot of the movies from my generation that are being remade or rebooted right about now, it seemed ripe for bringing up to date. With modern special effects and a more talented cast, they could do a lot with this story.  Turns out I was right as this remake is well written, well cast and a hell of a lot of fun.

The script, written by Buffy: the Vampire Slayer writer/producer Marti Noxon, updates the plot while remaining faithful to the original idea. Charley Brewster, played by Star Trek's Anton Yelchin, is a senior in high school, living in a Las Vegas suburb with his single mom. They get a new neighbor named Jerry, played by Colin Farrell, whom Charley's mother (Toni Collette) finds attractive. Ed, a nerdy friend of Charley's tries to tell him that Jerry is a vampire, but Charley won't listen. That is, he won't listen until people start disappearing and Charley starts watching Jerry and is astonished by what he sees. With no one else to turn to, Charley visits Vegas magician and "vampire hunter", Peter Vincent (Doctor Who's David Tennant). But will Peter believe him and even if he does, can they stop Jerry before he kills them or Charley's family?

My favorite part of the original was the Peter Vincent character, played by Roddy McDowall. His Peter Vincent was clearly based on Peter Cushing and he stole the movie. His quips and references to his old movies make him a memorable character. While the whole movie is better this time around, it is once again, the character of Peter Vincent who steals the show. Here he's more reminiscent of stage illusionist Criss Angel. David Tennant plays him with panache. He drinks and swears to comic effect

Although Tennant is a scene-stealer, the whole cast is good. Yelchin isn't the most charismatic of actors, but he plays the part well enough. Charley's mother gets a slightly more to do in this one, which makes her more memorable than in the original. And thankfully, they jettisoned the silly subplot where Amy looked like an old love of Jerry, although they do give a connection between Jerry and Peter. One of my only complaints about the cast, and indeed the movie as a whole, is that Charley and his girlfriend - and all their friends - look way too old to be high-schoolers. Since they were casting 20-somethings, why not just say they're college students? Charley could still be living at home.

While vampires are still the monster of the moment, the way they are presented here is old school. These aren't your brooding, sanitized teen heartthrob vampires. Ed even has a great line where he says, "I'm so mad right now. I can't believe you accused me of reading Twilight!" Vampires here are described, again by Ed, as "Killing machines, like the shark from Jaws." There's nothing romantic about Jerry, although because he's played by Colin Farrell, he still exudes some charisma, but of the deadly and not the soppy variety.

The original Fright Night spawned a sequel. If they can get the same team who made this remake back together, I'd be excited to see a sequel to this one as well. It's one of the most enjoyable movies of the summer.

Some of the plot logistics are changed while staying true to the original concept.  One of the biggest changes was that of the relationship between Charley and Ed.  In the original they were best friends with Ed being slightly off, and a bit Gothic.  Here they were best friends until Charley started dating Amy, leaving Ed behind.  Charley is a bit of an insecure dick in this version, but it makes him a more solid character.

I was also a huge fan of the original and loved finding bits and pieces that were included here.  In the original, Ed jokingly says to Charley, "You're so cool Brewster."  Here Ed says the same thing but in a much more hurtful way as Charley now hangs out with the "cool" crowd.  The other classic line from the original, "Welcome to Fright Night, for real."  Is also spoken here by Jerry.  After turning into a vampire, Amy wears a similar Marilyn Monroe white dress to what Amy wore in the original.   One of the nicest surprises was seeing the original "Jerry," Chris Sarandon, in a cameo.

One notable change is the use of a cross as a weapon against a vampire.  In the original, Peter Vincent uses a cross in trying to stop Jerry, only to learn that he has to have faith in order for that to work.  A similar scene occurs here, however the follow up scene where Peter finds his faith, is dropped completely.

As a Doctor Who fan I was a bit taken back when Tennent swore.  I turned to my seventeen year old son in the middle of the theater and asked, "Did The Doctor just say "fuck"?"  Like Scott wrote, Peter Vincent is a scene stealer.   He and his lingerie loving girlfriend verbally spar in all of their scenes to great comic effect.

The rest of the cast adds to the fun.  Anton Yelchin clearly has a great agent as he has gotten some very good roles lately.  I also agree with Scott that he is not the most charismatic actor, but he does have a very likable presence about him.   Considering how he treated Ed, it takes a likable actor to get the audience to forgive Charley's attitude towards his former best friend.

Collin Farrell on the other hand literally drips with charisma.  All the ladies in the movie get wet just looking at him.  In the original film Charley's mom assumes Jerry is gay as he has a male room mate.  This time she just assumes any guy that good looking and not married must be a player.

Remakes are always hits or misses.  Conan the Barbarian is clearly a miss, while Fright Night  however, is a solid hit.  It contains some laughs and some honest to goodness tense moments.   This is what vampire movies are supposed to look like.  Fright Night is one of the best films of the summer!

I'm going to have to disagree with my brothers on this one. I hated this movie. The script is sloppy, the CGI effects cheesy (see photo), and the action so over the top as to be completely ridiculous. Let's see, where do I begin?

The original movie set up the story so much better. It was a mystery and it contained a few subtle touches. Here the mystery is missing and it's about as subtle as a sledgehammer. Charley doesn't have to figure out his new neighbor is a vampire because his friend Ed already knows and tells him in like the first ten minutes. Although it is never explained just how Ed, who doesn't live as near to Jerry as Charley does, somehow suspected this guy of being a blood sucking demon. Although to be honest Jerry does an incredibly poor job of hiding his true identity.

And although the movie tries to explain that since this is Las Vegas there are so many transient types around that people can go missing without it being noticed. But then we are shown that some of Jerry's victims are high school kids and entire families in this suburban desert neighborhood. Apparently the Las Vegas police department doesn't investigate missing teens.

And why, when Jerry is digging up their backyard to pull up their gas line, don't Charley or his mother bother to call the police? Instead they drive out into the desert where -conveniently- they have no cell phone reception. But then I guess this is a small complaint in a movie where a vampire can blatantly sink his fangs into a victim on a crowded dance floor without anyone noticing. And just why Amy doesn't scream for help is beyond me. In the original movie Jerry at least is shown hypnotizing her first.

One of the best scenes from the first movie is missing. The moment where Charley walks in to find that his mother has unknowingly invited their vampire neighbor into her home was perhaps the single scariest moment in the original. But that is way too subtle of a scare for this new millennium. Instead this Jerry doesn't even try to hide the truth. He just rips up their backyard in order to destroy their house. And not a single neighbor bothers to call 911.

The character of Peter Vincent (a combination of Peter Cushing and Vincent Price) was the best part of the original movie but here he has been completely rewritten. He went from being a two-bit has-been to an unbelievably huge success. He lives in a fabulous penthouse apartment that has truly terrible security. I believed it in the original movie when Peter Vincent finally accepts the truth about vampires and then rises bravely to the occasion. Here he acts like a Goth version of Arthur (did Russell Brand turn down the role?) but then later on we find out that he actually survived a vampire attack as a child and therefore knew of their existence all along. His 11th hour act of bravery doesn't ring true. Roddy McDowell is sorely missed.

The one thing I do agree with Eric and Scott about is the cast. They are all talented and they gamely give it their all (with the exception of Christopher Mintz-Plasse who single-handedly removes any scares from his big scene with his shameless mugging). But to no avail. By their nature vampire movies are fantastic but they at least need a modicum of common sense, which is nowhere to be found in this updated mess. 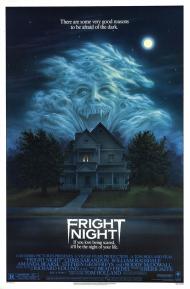