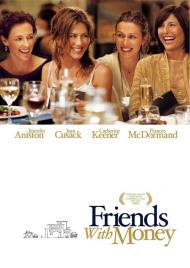 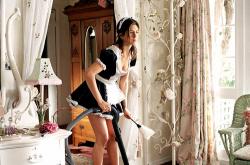 Jennifer Aniston in Friends with Money.

I remember an old Saturday Night Live sketch where a group of young guys discover a genie who can grant their wishes. One of them wishes to see two real live lesbians making out. What appears are two rather masculine looking women who kiss in a way that has nothing to do with the typical fantasy of what girl on girl action should be. Well, Friends with Money is to chick flicks what those lesbians are to young men's fantasies of lesbians. Your average chick flick features high melo-drama, lots of tears and quite probably includes a woman (preferably a young mother) dying of some unnamed disease. Friends with Money features none of those things.

The movie, I can't say plot because there isn't one, centers on four female friends, three of whom have different levels of wealth, while Olivia (Aniston) is forced to work as a maid after quitting her job as a teacher at an elite prep school. All of them but Olivia is married with children. They spend most of the movie talking about themselves and each other.

One question that Franny (Cusack) asks at one point is, "I wonder if we all met now whether we'd become friends?" The answer is emphatically, "No". This is a group of fairly self-obsessed women with decreasingly less in common who are obviously only in contact because of their youthful friendship. They are constantly evaluating their friends and almost always finding something about them or their relationship to criticize.

Olivia's problems are that she's single, not making much money and is obsessed with a married man whom she once had an affair with. Jane (McDormand) is depressed and married to a sexually ambiguous British man that has at least one of her friends convinced that he is gay. Christine (Keener), is in an unhappy marriage with her co-writer husband. The big conflict in their life is the construction of a second story on their home that annoys the neighbors. And lastly, the happiest of the bunch -- and coincidently(?) the richest of the four -- is Franny (Cusack), whom the others constantly question whether she's really as happy as she seems and criticize her husband for smoking.

While events do occur over the course of the story (one of the marriages breaks up, Olivia meets someone), that clearly isn't the point of the movie. At the end of it, while some of the characters seem happier and some sadder, the resolutions are at best precarious and could be wiped away in a matter of days.

Fortunately, since this movie focuses so strongly on characters rather than plot, all four of the leads do a great job. They each define very distinct characters and keep you at least some what interested over the course of the movie.

In some ways this movie reminded me of an off-broadway play; lots of talking and character development, but very little action. With plays or movies like that you really need to relate to the characters to truly enjoy them. And in the case of Friends of with Money, I could not. 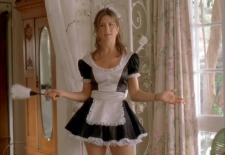 Olivia does all the cleaning, but pays Mike after they have sex?

I could relate partially to these characters. They talk constantly about each other, just as we all do in real life. Yeah we all do, even you, the one reading this who thinks they don't. We talk about people who create an emotional reaction in us. Friends do that.

The unique thing about this chick flick, is that it does not blame all of the women's problems on men. Olivia created her own situation. She had an affair with a married man, and slept with a trainer on a blind date, even though he clearly has no real feelings for her. She quit her nice job to become a maid. Christine is trying to keep up with her richer friends. She is the most snooty when it comes to money. Her neediness is at fault for her marriage ending. It takes her neighbor's window to show her how others see her.

Of all the spouses, only Aaron gets a side plot. He comes across as sexually ambiguous, and is constantly being flirted with by apparently gay men. He even makes friends with a married man who likewise comes across as gay. This movie never resolves his sexual identity, so why give him his own storyline?

This film reminded me of Alan Alda's The Four Seasons, in which a group of friends get together, and then talk about each other later. It has a clear story arc, as they all learn to accept changes within their tight circle. Friends With Money has none to speak of. As Scott wrote, what resolutions there are, seems anything but solid.