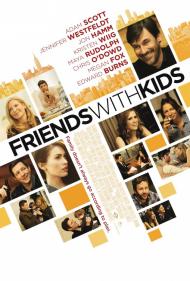 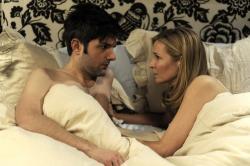 Adam Scott and Jennifer Westfeldt in Friends with Kids.

Jennifer Westfeldt (Kissing Jessica Stein) writes, directs and stars in this romantic comedy whose hook is two friends deciding to have a baby together without being romantically interested in each other.

Westfeldt plays Julie, a single woman whose biological clock is ticking loudly. Her best friend and neighbor is Jason (Adam Scott). When the two of them see their circle of friends having babies and how stressed their lives are because of them, they decide that the smart thing to do will be to have a baby together as friends, since they both want a child, but don't want to stress out a relationship with one. The way they see it, children kill romance, so their idea is that if they have a child with each other, while still dating other people, they can have it all. Did I mention this movie was a fantasy?  I really don't feel I even have to mention the rest of the plot. If you've seen any romantic comedies before then you should already know exactly how the story goes from there. There isn't a surprise ending.

The biggest problem with this movie is that the two leads aren't particularly likable. Julie is practically a blank slate. We learn almost nothing about her except that she likes to play a game where she names two horrible things and you have to pick one. Would you rather die a slow, painful death or have to watch the love of your life die a slow painful death? Jason is even worse. He's a serial dater whose longest relationship is less than two months. He's short, arrogant and lacking in charm. Julie could do much better and Jason should be glad he can get anyone to date him, let alone want to replicate his genes.

One odd thing in the script is its use of profanity. Jason and Julie swear quite a bit, which seems not only out of character, but isn't as funny as perhaps Westfeldt thought it would be. I'm no prude when it comes to language and I fucking swear all the time, but hearing Julie say, "Fuck the shit out of me." at the end of a romantic moment doesn't fit the tone of the film.

In real life Westfeldt is in a long term relationship with John Hamm, who also appeared in Bridesmaids. I'm guessing he introduced her to the cast during filming. This movie began filming in 2010, before the Bridesmaids juggernaut was released in theaters and I wonder if they'd known how well it was going to do, if they still would have used the same cast? Certainly anyone expecting this movie to be similar to that one will be sorely disappointed, which might be why I've seen no marketing that emphasizes the connection.

In the film, Hamm is married to Kristen Wiig's character and their marriage is having difficulties. Wiig plays her small part almost completely serious and very well, demonstrating that she's not limited to comedy. Chris O'Dowd and Maya Rudolph are the most likable couple. They show far more charm than the two leads and I wanted to see more of them.

The most important thing in any romantic comedy, since the ending is inevitable, is that you have to want to see the couple overcome whatever artificial barriers the script throws in their way. In the case of Friends with Kids I really didn't care. 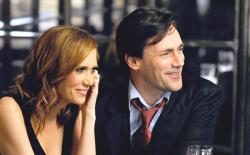 Kristen Wiig and Jon Hamm in Friends with Kids

Scott was bothered by the tone of the film and the swearing seeming out of place. He mentioned a line spoken by Julie, while I found this line spoken by Jason to Julie, to be even worse. "Please, please, just let me fuck the shit out of you right now. And if you're not convinced afterwards that I am into you in every possible way a person can be into another person, then I promise I will never try to kiss you, or fuck you, or impregnate you ever again, as long as I live. I swear to God." Not only is that kind of dialogue not funny or romantic, but we also have to hear Julie's comments on the size of Jason's and another man's dicks. If that were not enough, we also get to hear about the tightness or lack of tightness of Julie's vagina. Again, these scenes do not create any humor, just a mild groan at the desperation of Westfeldts attempts to create a joke.

Scott also mentioned the game Julie likes to play with Jason where they talk about deciding between two horrible scenarios. Besides familiarity, the script gives this as a reason they have a relationship. It is as fragile a plot device as ever constructed. The one decent scene in the film is when all the principle players have dinner together at the ski lodge and Ben says to Jason and Julie, "You guys are fucked....You made a totally irresponsible decision." It is the most honest piece of dialogue in the entire film. The cast, as well as the audience, knows their arrangement is utter bullshit.

Friends With Kids wants to be When Harry Knocked Up Sally. A speech Jason gives near the end even resembles one Harry says to Sally, but this film cannot touch When Harry Met Sally. Jason and Julie are thirty year old something professionals with the maturity level of college Freshmen. They created a child with the thought of how it would benefit and be convenient for them. They gave no thought to how it would affect their child. Many couples divorce, leaving their children in the unfortunate position of being torn between two parents. These idiots started with the intention of creating a child torn between two parents. Many children become scarred by an unplanned separation of their parents. These two thoughtless morons intentionally put their son in an emotionally unstable situation. Never mind that they get together by the end of the film. I never liked Julie or Jason, so I cared not for their happiness. A happy ending for me would have been if Leslie and Alex adopted their son.