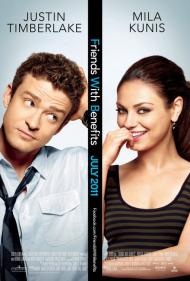 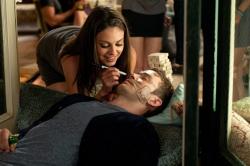 Mila Kunis and Justin Timberlake in Friends with Benefits.

At first glance, Friends with Benefits seems awfully similar to No Strings Attached, which was released earlier this year. Both films are R-Rated romantic comedies about two friends who decide to try and have sex, but only as friends. Thankfully though, while the plots are similar, the execution here, while not exactly original, is much more charming, the laughs more frequent and the chemistry between Kunis and Timberlake seemingly genuine. Portman may have won the Oscar for Black Swan, but Kunis is clearly the winner here.

Kunis plays Jamie, an executive recruiter who woos Dylan (Timberlake) from L.A., to work as GQ's art director in New York City. There's a spark between the two of them almost immediately, but instead of dating they become friends. When both of their love lives goes stagnant they decide to give sleeping with each other a try, but with the proviso that they do it strictly as friends. After a short while though they realize that they want more than that and decide to stop having sex and begin dating other people again. But can they go back to being just friends again or will they realize that they're perfect for each other before the credits roll?  I'm sure you know the answer to that question, but happily the journey to that foregone conclusion is worth the trip.

In my review of No Strings Attached, I mentioned that the R-Rating it received was for the language and little else. Here though, the rating is not only for the language, but for some brief nudity (both leads (or their body doubles) flash their ass), and several bouts of explicit sex. We're not talking pornography, but, as an example, we see Dylan going down on Jamie under the sheets while she gives him instructions on how to do it. Of course, the real purpose seems to be just a chance for the two leads to show off their toned bodies and I don't think you'll find too many people complaining about the chance to look at either one of them.

More important than what they do in bed, is what they do out of it. The most important thing in any romantic comedy is whether or not you care if the two leads end up together and here I did. I liked both of them and they seemed to like each other. They're actually good together and it's easy to believe they are in a relationship. We aren't just told that they are, we can see it. This is in large part due to Kunis and Timberlake who have a good chemistry together. Timberlake proves again that while he may never be the world's greatest actor, he can perform light roles, while Kunis continues her streak and is an actress whose career is one to watch if she can keep it going.

There's a romantic comedy referenced several times in the movie called, "I Love You, I Love New York". Dylan and Jamie watch part of it together and it's filled with romantic comedy cliches, like  When Harry Met Sally references and some poor studio shots that are supposed to be set in New York City. These obvious digs at rom-com cliches might be more biting if, despite trying to be different, this movie didn't seem so familiar itself.  It's funny and entertaining, but not as original as it thinks it is and is not above a cliche or two itself.

At two hours the movie does run a bit long. There is definitely room for some trimming and tightening. A subplot with Dylan's family, which attempts to add drama could have been cut back. His father has alzheimer's and eventually provides some inspiration for Dylan, but Harrelson, as Dylan's gay friend (how's that for a romantic comedy cliche?) could just as easily have made the same speech.

Not as original as it wants to be, Friends with Benefits, is still the best romantic comedy of the summer. 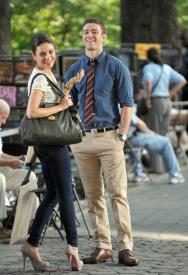 Friends with Benefits fares better than No Strings Attached as the leads are more likable and realistic.  Timberlake and Kunis seem from the same world.  Timberlake looks like the kind of guy I imagine would work at GQ magazine, while Kunis is just the kind of girl you would hire to persuade men to work somewhere.  Portman looks like a model, was playing a doctor and was supposedly attracted to Kelso?  I never bought those two, but Timberlake and Kunis make a convincing couple.

Scott mentioned When Harry Met Sally and I will as well.  It set such a new standard for romantic comedies that almost every one made since can be traced to it.  As WHMS taught us, sex changes everything.   Who has not experienced, or at least imagined, recreational sex without any emotional obligation?  However, when you try to have it with a genuine friend it does not work as the distance between a good friend and a lover is the absence of sex.  Once that thin line is crossed everything is blurred.  If it is not then the friendship was never a very close one to begin with.

The cast is uneven.  Timberlake is an adequate actor.  What drama this movie contains is out of his reach. He is much better in the lighter moments.  "YOU CALLED ME A PUSSY!"  He yells to Kunis, justifying why he climbed on the HOLLYWOOD sign even though he is scared of heights.  Kunis is as adorable and sexy as they come.  She on the other hand, handles drama just as competently as she does comedy.  Harrelson is trying way to hard to be a convincing gay character.  Every other sentence he speaks contains the word, "dick" or "cock" as if he has to constantly remind the audience of his preference.  He flirts with Timberlake at work and asks male models, who are wearing only jockstraps, to hug and hold each other.  Sexual harassment anyone?

It does run long.  It should have climaxed when they visited California. The reason they break up simply drags out the ending we all know is coming.  The insult scene should have been when Jamie discovers Dylan loves her.  Instead, she runs back to New York and the movie essentially starts back at square one.  In the past, romantic comedies ended with the couple getting engaged or married.  This one ends with them in love.  Since they have been in love nearly the entire film, it is not really much of an ending.  The entire story arc is just the two of them admitting their feelings while not making any solid commitment.  Call me old fashioned but it feels incomplete.