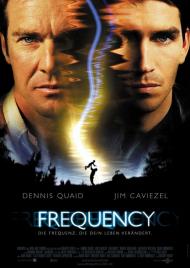 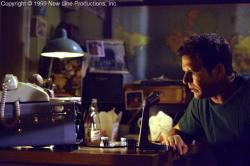 I have to admit, I'm a sucker for Time Travel stories. Yes, I know that most of them don't bear close scrutiny or you'll find a plot hole or two, but to quote Basil Exposition of Austin Powers, 'Try not to worry about that too much and just enjoy the ride.' And Frequency is an easy ride to enjoy.

It follows the story of a grown son able to communicate with his father in the past by way of his father's old Ham radio. Using the radio, he attempts to change his father's fate and his own life. He soon discovers however, that changing the past can have some strange effects on the present.

One of the joys of this movie is Dennis Quaid. Returning here for one of his increasingly rare screen appearances. As a long standing fan of his, it is a delight to see him. He plays the father, trying to deal with the concept of communicating with his son thirty years in the future. A future where his own fate is questionable at best.

There are some good action sequences in the film as well, beginning with an explosive opening as Dennis Quaid's character, a fireman, attempts to free some trapped construction workers.

The only parts of the film I didn't enjoy, were the two or three montage sequences of Father and Son doing the Father and Son thing to sappy music. It felt like a scene from the Wonder Years, and struck the only sour note in the entire film.

Good action, lots of suspense, Dennis Quaid, and an intriguing Time Travel concept. What more could you ask? 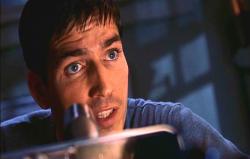 Like Scott, I too am a sucker for a time travel movie. Frequency is not a traditional time travel movie in that no one actually travels through time. What happens is that, through a strange phenomenon, a man is able to talk to his father 30 years in the past over the same ham radio set.

With this capability the son, John, is able to warn his father, Frank, about a fire accident and thus save his life. However, by saving his fathers life John also inadvertently saves the life of a serial killer, who is then able to kill more people. One of his victims being John's mother. With John's knowledge of the killers victims through police records he and Frank attempt to stop the killer. My favorite scene is where both Frank and John are fighting the same guy at the same time, separated by 30 years.

What makes this movie work so well for me is the two lead actors, Dennis Quaid and John Cavaziel. They both play their parts so sincerely that the movie never gets ridiculous.

Dennis Quaid has never acted better. His characters fears and desperation are all apparent on his face. John Cavaziel is a great actor with a great future in film if he gets the right parts. His scenes of talking on the radio while you see tears swell in his eyes are very effective.

The heart and soul of this movie is the relationship between the slightly over bearing father and the unhappy grown son. With that in mind, the one and only fault I find here is that their eventual reunion is lacking the length and dialogue I was waiting for. The whole movie builds to that scene and then its over with a couple of words and a hug. Still, as a son and a father, I could not help but be touched by this film. 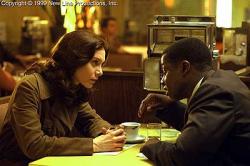 Yes there are a few moments of true emotion and yes the father and son characters are quite beautifully portrayed by the two male stars (they alone keep this movie from one star hell). With that in mind I still have but one word for this movie 'hokey schmaltz' (oops, I guess that is two words).

It starts off interestingly enough and does manage to entertain and intrigue although it is never riveting. And the culminating scene with the line 'I'm still here Chief' is not only disappointing, as Eric mentioned, but downright embarrassing. It ranks up there with the 'put your head right there' line in Stella as one of the cheesiest and most banal lines in recent memory.

If you are in the mood for a heartwarming story about fathers and sons, and don't mind the after-taste of saccharine, then by all means watch this flick; if not, don't.