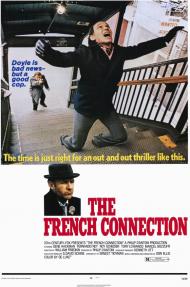 Roy Scheider and Gene Hackman in The French Connection.

There have been a lot of movies set in New York City, but they almost always get it wrong. They either over romanticize it or go the other way and make it completely gritty. You have When Harry Met Sally on one end of the spectrum and The Warriors on the other end. The French Connection though, is the closest I've ever seen Hollywood come to showing a true depiction of the City on film.

Gene Hackman stars as NYPD Detective Popeye Doyle. He's an old school cop of the very un-PC variety. He's a racist, a drinker, a womanizer and he doesn't mind beating the shit out of a suspect to get the answers he needs. The plot revolves around a major drug shipment coming into the city from France (hence the title). Doyle and his partner Russo (Scheider) use some old-fashioned detective work, staking out buildings and following their suspects by foot and by car to put together the case.

The ways that the movie gets New York right are numerous. It's set in both Brooklyn and Manhattan (showing that unlike most movies there is more than one borough in the city). Popeye lives in a small, unglamorous apartment that looks as though he could actually afford it. Characters ride the subway. There's lots of walking, traffic plays a part in one scene and the city is shown as having a very diverse population. Despite being set in 1971, the depiction shown here is still very reflective of how the City is today and goes way beyond the normal glamour and touristy things usually depicted in the movies or seen by the average visitor.

Of course the most famous thing about this movie, and what it is most remembered for, is the elevated train chase through Bensonhurst Brooklyn, and deservedly so. Like the rest of the movie, it is filmed very realistically. When Doyle (who's in a car chasing the train) hits other cars during the chase, you feel the crunch. A car chase this good wouldn't be filmed again until more than 30 years later in The Bourne Supremacy. It's a classic scene that deserves its reputation.

Hackman as Doyle is terrific and his work won him an Oscar (one of 5 that the film won, including Best Picture). Popeye is one of those iconic characters and Hollywood has been using him as a blueprint for NYPD Detectives ever since. The rest of the cast is good, but the movie is his.

When people talk about the Golden Age of movies in the 1970s, this is one of the ones that they're talking about. 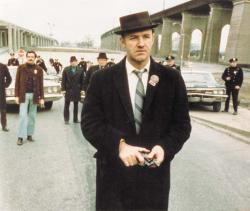 Popeye Doyle with police back-up at the climax of The French Connection.

Scott, have you seen The Warriors lately? It’s way more cheesy than gritty, although I know what you mean about it being a not very realistic view of the city. And I agree that The French Connection is a great time capsule of early 1970s New York as well as a realistic representation of life in the Big Apple that still holds true today (with the exception of the fashions worn, types of vehicles on display and the fact that no one has a cell phone).

The realism of the famous car chase scene was helped by the fact that one of the crashes was real. A man on his way to work and unaware of the filming inadvertently drove into the shot at the corner of Stillwell Avenue and 86th Street. It looked so good they kept it in the finished movie. Another thing adding to the realism is the fact that both the conductor and motorman on the train were actual MTA employees. They wouldn’t allow an actor to operate the train. Another bit of trivia is that Popeye’s Famous Fried Chicken fast food joints were originally named for Gene Hackman’s character.

It’s interesting to note that the story takes place during the holiday season. There are wreaths and lights on display in store windows, the movie begins with Popeye asking a little boy what he wants for Christmas and he famously chases a suspect wearing a Santa Claus suit. Judging by the amount of decorations though, Christmas has grown exponentially more extravagant in the 40 plus years since this movie was made.

I couldn’t agree more about Gene Hackman’s iconic performance and I love the porkpie hat. He really knew how to bark out an order. Watch the way he takes charge upon entering a bar, “All right, Popeye's here! Get your hands on your heads, get off the bar, and get on the wall!” He also has a signature line, “Do you pick your feet in Poughkeepsie?” He is a man obsessed with getting the bad guy and he doesn’t really care if he hurts a few innocent people along the way.

Although the car chase is the best and most famous scene this movie is gripping from beginning to end. There is a memorable little scene on a subway platform where Doyle is trailing one of the French suspects. They play a little game of cat and mouse, in and out of a subway car, that is quite tense and amusing. Again adding to the realism, it was filmed without the MTA or NYPD’s knowledge.

As Scott wrote, The French Connection is one of the best movies from that cinematic Golden Age of the early 1970s. It can also serve as a reminder of a time when we were a more free, if slightly less safe, society. 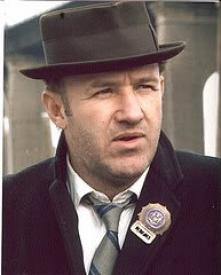 Gene Hackman as Popeye Doyle in The French Connection

Even though I had yet to thoroughly watch The French Connection, I had heard and read for years about the character Popeye Doyle. As Scott wrote, he is of the very politically incorrect variety. After Russo, his Italian/American partner, gets cut by an African/American suspect, Doyle teases him, “You dumb guinea.” Russo asks, “How the hell was I supposed to know he had a knife.” Doyle simply states, “Never trust a nigger.” No ethnicity or nationality goes unoffended by Doyle. When he is pursuing a Frenchman, he phones in, “This is Doyle. I'm sittin' on Frog One.”

I am not the biggest Gene Hackman fan but I have always enjoyed what he can bring to a movie. He has real screen presence and that is saying something when you consider just how average looking he is. The fact that he can make the unpleasant Doyle so incredibly likable is a real testament to his charm. The French Connection is a solid enough film but it is Hackman’s performance that gives the audience something to latch onto and connect with. I also agree with Patrick that Hackman makes that porkpie hat work.

The famous car chase actually begins as an assassination attempt and then a foot chase before Doyle confiscates a car and pursues the criminal in question who has hijacked an elevated train. There have been countless movie car chases. Many have more elaborate stunts and action than this one. Some have larger body counts and last longer. What truly makes this one so gripping is the hour of screen time that has come before it. The setting has been firmly established as realistic. We do not expect and nor do we get any outrageous heroics or superhuman stunts. Doyle is really pissed off. You can feel just how much he really wants to catch this guy and nothing is going to get in his way.

Although Hackman and the car chase are superb, this film’s reputation has outgrown itself. The plot is simply a cop’s hunch about a low level hood that leads to a much larger crime. It could easily be told in any number of hour long television police shows. A few too many times we have scenes of the criminals plotting and planning their crime. As Doyle is the only fascinating character, the film suffers with every scene that he does not appear. Not that it runs too long but we do not need any of the scenes in France or all of the criminal meetings. Some of those moments seemed like filler.

Do not get me wrong. I enjoyed this film’s realism in comparison to all of the fantasy action films Hollywood puts out. However, I also found it a bit over rated.