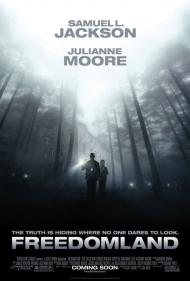 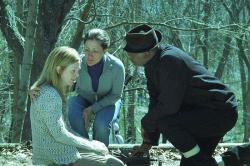 Freedomland is a textbook example of how great acting cannot make up for a lousy script. Samuel L. Jackson, Julianne Moore, Edie Falco and the rest of the cast give it their all, but it isn't enough to keep this from being a rather boring mess. Richard Price, who wrote both the novel this movie is based on and the screenplay, serves up some really bad dialogue and vague motivations for these characters.

The movie opens at night with a dazed looking Moore walking the streets of a black community in New Jersey. She makes her way through some projects to a medical center. She claims that she was carjacked and that her 4-year-old son was in the back seat of her car. She gives a description to the police of a black male.

Even though her story has obvious holes in it, the police from the wealthy neighboring white community arrive in force and put a virtual lock down on the housing project where Moore claims the carjacking took place. All of this seems perfectly feasible when you consider that there have been actual documented cases of white women committing crimes and then blaming them on a black male. The police in real life would most likely react as they do in this movie.

The problem with the script is that it is too obvious from the jump that this woman is hiding something. When the truth finally comes out it is anticlimactic and definitely not worth waiting for.

This one is worth watching only if you are a big fan of the stars, and even then I recommend waiting for the DVD.