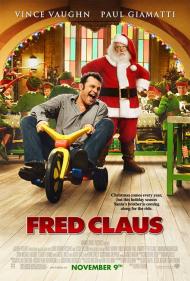 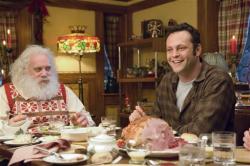 Unlike last year's disappointing Christmas movie Deck the Halls, Fred Claus actually provides some laughs. Vaughn is in his trade mark rapid speech mode. From detailing a sad future for a little girl to throwing sarcasm around like a snowball, Vaughn is the best thing in the film.

Fred is a repo man in Chicago. He is dating a hot meter maid who is tired of him disappointing her. He wants to open a bar, but he does not have enough money. To solve all of his problems he calls his brother, Santa, for some money. Santa, with all his wisdom, invites Fred to the north pole to work at his shop in the naughty/nice department to earn the money and hopefully mend some fences.

Fred arrives and all of the family issues come to light. Santa's wife does not care for Fred. Santa's and Fred's mother favors Santa and it drives Fred crazy every time she says, "Why can't you be more like your brother?" Fred and Santa fight and Fred finds himself back in Chicago with his girlfriend broken up with him. The little boy who lives in his building, that comes often to visit, gets taken into child services. Fred ends up in a support group for brothers of famous brothers. The scene features several brothers of famous siblings all playing themselves. The idea is good but the scene drags out the gimmick.

Fred Claus is one of the better Christmas movies to come along in awhile. It has its message of family, redemption and of course saving Christmas. However, in current liberal fashion, it secularizes Christmas by not showing anything religious. Even when the soundtrack plays Silent Night the line, "Christ the savior is born." Is edited out. In Fred Claus, Jesus is replaced by Superman. Yes Superman. Early in the movie, Fred gets into a fight with a bunch of Salvation army Santas in a toy store. Superman action figures are clearly visible behind Vaughn. Years ago movies featured Nativity scenes as backdrops. Later in the movie Kevin Spacey, (who played Lex Luther in Superman Returns) has a scene with Santa that prominently features a Superman cape. Who needs Jesus when you got the man of steel?