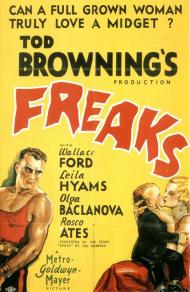 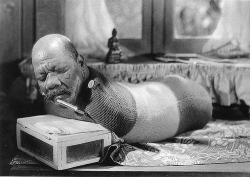 Prince Randian, aka The Living Torso, lights up in Freaks.

Freaks was MGM's attempt to cash in on the success of those early 1930's Universal horror classics like Dracula (which Browning had directed) and Frankenstein. It flopped at the box office but has since gone on to become one of the most enduring of all cult films. It features real deformed and disabled circus sideshow performers and as such has a much greater impact than a movie using make-up and prosthetics to create scares. In short, Freaks isn't for the squeamish.

One thing that makes this movie unique is the fact that the circus “freaks” are the good guys and the ones the audience identifies with. I can't think of another movie like it. It walks the line between exploitation and empathy brilliantly.

The story centers on the relationship between a gold digging trapeze artist calling herself Cleopatra and a sideshow midget with the moniker Tiny Hans. At first she enjoys his slavish attention while laughing at him behind his back. After learning about his large inheritance, however, she connives to marry him and then immediately begins to slowly poison him. Of course the other members of the sideshow eventually come to Hans' rescue once the dastardly plot is discovered.

This was clearly a pre-code movie. It features female Siamese twins, one of whom is married and the other sister gets engaged during the movie. The realities of their sex lives is blatantly suggested. And whenever one of the twins gets tired of being around her sister's husband she uses the excuse of, “I have to go.” Surely this is one of the earliest bodily function references in a movie. When one sister embraces her fiance the other sister reacts as if she feels the same sensation.

Also the manner in which Cleo caresses Tiny Hans suggests sex between a regular sized woman and a man that barely comes up to her knees. All of which was quite shocking for its day which probably explains why it failed to find an audience. It was just too real. It also features a human skeleton, a bearded lady, a sword swallower, a fire eater, armless wonders, a half boy, several microcephalics (known in the movie as pinheads) as well as various other human oddities. It certainly lives up to its title.

Where the movie surprises, and the reason it is still watched, is the fact that it forces you to see these abnormal folk as being as human as the rest of us. Even the human torso (a man without arms and legs) is treated with the same compassion as the rest of the members of the sideshow. Watching him strike a match and light his own cigarette is not something quickly forgotten (see photo).

Tod Browning actually spent several years with a circus and many of the details of the story, and no doubt the sympathetic attitude towards the sideshow performers, came from his real life experiences.

The most famous scene, other than the climax, is the wedding feast to celebrate the marriage of Cleo and Tiny Hans. The sideshow performers pass around a large crystal goblet filled with wine while repeatedly chanting, “We accept her, one of us! Gooble Gobble!” It is a truly disturbing scene.

The ending, where the freaks wreak vengeance on Cleo and her strong man boyfriend Hercules by attacking them with guns, knives and various other sharp objects during a thunder storm remains shocking. Even though a later scene showing Hercules to be singing soprano (implying the freaks castrated him) was cut from the movie when it was shortened from 90 minutes to its current 64 minute run time. Early test screenings were disastrous, with one woman claiming the shock of watching this movie caused her to miscarry.