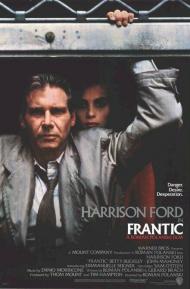 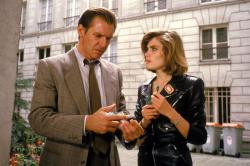 Frantic is one of Harrison Ford's most overlooked films, and for good reason. He has starred in many big hits and a few stinkers.  Sabrina anyone?   Frantic is that rare Ford film that falls in the middle. No, it never deserved to be a huge money maker, but it does not completely stink either.

Harrison Ford plays an American doctor in Paris with his wife.  She ends up getting abducted, sending him into a frantic search around the city of lights.   Along the way, he joins up with the gorgeous Emmanuelle Seigner, Polanski's real life young lover. Together they try to discover why his wife was taken and attempt to get her back.

The camera rarely leaves Ford. You never see his wife while she is being held. Other than getting to look at the beautiful Seigner, Ford carries this film alone. He does his patent 'average man in unusual circumstances' routine. Nothing much is required of him.  He goes from playful husband to frustrated underdog.  It is not much of a stretch.

Frantic is billed as a thriller, yet it has very few plot twists and even less action scenes.  Compared to most of Harrison Ford's other action movies, this would be considered slow paced.  It does not live up to it's own title.  Instead of Frantic, it should have been called I'm Getting there.

He spends more screen time with Seigner than Buckley.  They never have sex or become romantic.  She plays music he has never heard of, calling a song that is three or four years old an "oldie."  At 22, she is young enough to be this 44 year old's daughter.   Under different circumstances though, we get the feeling that a summer spent in Paris with Seigner, would be a vacation to remember.  Perhaps Polanski was trying to make some statement about older men and younger women, but that is his personal issue.  We go to Harrison Ford movies for action and excitement.  Of which, this film sadly lacked. 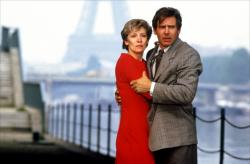 Roman Polanski gives us an interesting adult thriller very much in the image of Hitchcock. Only the plot is much simpler than any movie by the master. Set in Paris, Frantic derives most of its tension from the situation of being a foreigner at the mercy of a strange culture. A topic that the director could most certainly relate to. Harrison Ford gives one of his most sincere performances as the desperate husband searching for his kidnapped wife in the city of lights.

Betty Buckley, though underused, plays his age appropriate wife, giving her few scenes the needed realism. Consistent in tone and style this movie never really manages to take off. In terms of excitement it ranks with your average cab ride through Manhattan. Meaning it is never dull, features a few close calls, but ultimately is a let down. 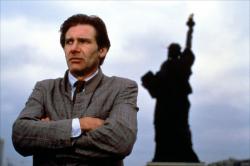 Certain movies you forgive because of who stars in it. Frantic is one of those movies. When I first saw it in the theater, I was deep into my hero worship of all things Harrison Ford and I raved at the time that it was one of his best movies. Now, with the benefit of hindsight, I can clearly see that this is not so. Even though he does give a great acting performance, the movie is just too slow in it's build up and lacks a big enough payoff to be truly deemed great.

As Patrick mentioned, this movie is very Hitchcockian in it's execution. The everyman, in over his head, in a situation in which James Bond would feel completely at home. Forty years earlier and Jimmy Stewart would be starring as the Doctor searching for his wife. Yet, despite director Roman Polanski's best efforts, this movie lacks the visual style of the Hitchcock classics.

Moving at a snail's pace in an attempt to be a realistic depiction of a man searching for his wife, Frantic is a let down as a thriller. It also lacks the emotional depth necessary to be a great love story. At no point are you on the edge of your seat rooting for Harrison to reunited with his wife. So while not Harrison's worst movie, I would dub Mosquito Coast with that honor, it is certainly not one of his best.

Oh and PS, Eric, I quite liked his version of Sabrina.