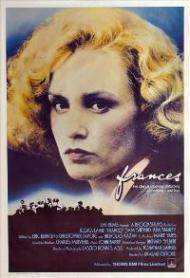 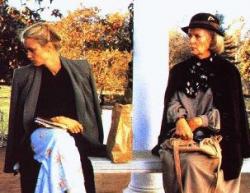 Frances tells the story of actress Frances Elena Farmer. Although at the time of its release this movie was advertised as a true account of her life (check out the tagline), it has since been revealed to be largely fictionalized. The main fabrication being that Farmer underwent a lobotomy while institutionalized against her will and that she was severely abused and raped while a patient at Western State Hospital in Washington. While Frances Farmer certainly lived a troubled life the facts are not as sensational as this movie would have you believe.

Another liberty Frances took with reality is the portrayal of the character played by Sam Shepard. Harry York is a fictional person based on a political radical named Stewart Jacobson who claimed to have been one of Farmer's lovers, though close friends of the star denied his even knowing her. Just how a movie can claim to be historically accurate when the protagonist's main love interest was an invention by the writer is a question the filmmakers never address, although on the DVD commentary director Graeme Clifford states, “We didn't want to nickel and dime people to death with facts.”

The movie begins in 1931 in Seattle. A teenage Frances (still in high school) has just won a literary award for writing an essay called “God Dies” that she said was partly inspired by the writings of Nietzsche. She later wins a trip to the Soviet Union to see a production at the Moscow Art Theater. Against her mother's wishes, she goes abroad.

By the time Frances Farmer arrives in Hollywood she is already tainted by association with atheism and communism. Her rebellious un-star like behavior (she refuses to participate in studio sponsored publicity stunts and insists on appearing onscreen sans makeup) coupled with a burgeoning taste for liquor soon become problematic. Farmer leaves Hollywood for the New York stage where she thinks things will be different. She befriends Clifford Odets and tours in a production of Golden Boy. Eventually she realizes that the Group Theater is just as guilty of exploiting her name for publicity as Hollywood. Frances winds up back in Tinsel Town before spending half of the 1940s institutionalized.

Regardless of the historical accuracy of the details, one thing is indisputable. Jessica Lange gives one of the most explosive performances in movie history as Frances Farmer. She pulls out the stops in the big dramatic scenes but is also capable of capturing Farmer's intelligence in subtler moments and throughout the movie she exudes the effortless glamor of one stunning beauty that can only be captured by another equally stunning beauty. She lost the Oscar to Meryl Streep for Sophie's Choice but still took home a golden statuette that night, winning for supporting actress in Tootsie. Not a bad year.

She beat out costar Kim Stanley in that category. Stanley is brilliant as Lillian Farmer, Frances' mother. She is as gung-ho about stardom as her daughter is reluctant. She enjoys the spotlight vicariously through Frances and is constantly urging her daughter to play the movie star game. Their relationship takes a darker turn when her mother gains custody of her troubled daughter and has her institutionalized. The movie also includes Farmer's brief comeback in the late 1950s, specifically her appearance on television's This Is Your Life.

By all accounts Frances Farmer led a very troubled life. The fact that she was beautiful and talented lends her story a certain fascination. Frances the movie exaggerates her troubles but it also features two great performances in Stanley and Lange. Sir Anthony Hopkins is on record as saying Lange's is his favorite performance ever by a woman in any movie. High praise indeed. Sharp eyed viewers should look for Angelica Huston as a mental patient and Kevin Costner making his big screen debut in an uncredited bit part.