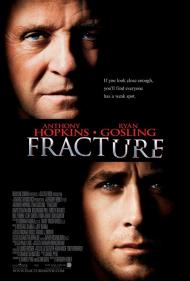 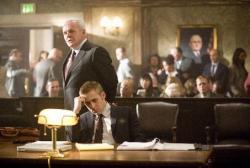 Hoblit has an affection for the court room drama and the relationships of those involved in such proceedings. As he did in Primal Fear and Hart's War, Hoblit uses dialogue, often in the form of testimony, to advance the plot in Fracture. However, this movie also has the same weaknesses of his previous courtroom dramas.

Fracture opens with a rich old guy, Ted, killing his younger wife for having an affair. He gets arrested and decides to defend himself, acting as his own council. Gosling plays an assistant DA, Willy, who is on the verge of getting a high paying job at a Law Firm. He agrees to take this last case, thinking it is open and shut, due to the fact that Ted has signed a confession. The case proves to be quite a bit trickier than he expected.

Hopkins, in full on Hannibal Lecter mode, struts around with cocky arrogance. That in itself is scary considering how damning his case seems. Gosling, is likewise cocky, and it works strongly against him as it causes him to be careless. The best scenes are when the two interact. Sadly, too much time is spent with them interacting with other characters and not with each other.

As in his previous work, Hoblit creates fascinating characters. Yet, also like his other films, he creates lots of superfluous characters who take up far to much screen time. They seem to only serve as filler. For example, Willy's boss is in several scenes only to berate him. A hot chick, from his potential new job, hangs around to provide some possible romantic intrigue and or a romp in the sack. Both parts should have been trimmed. The one secondary character who needed more screen time was Ted's wife's lover who ends up being the key character of the entire movie.

An action movie is always welcome, but movies that move along due to its dialogue and character intrigue can be just as exciting. Hoblit has yet to make a perfect movie but he keeps making some good ones. I hope his next film has as interesting characters as he has here, but I also hope he finds a way to have them share more scenes.