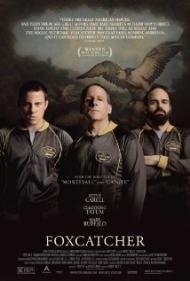 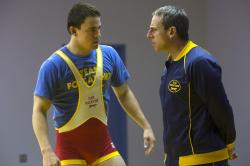 Foxcatcher is the latest work from acclaimed director Bennett Miller (Capote, Moneyball). It's a dark brooding true-crime drama that unfolds slowly but features a trio of terrific performances from Steve Carell, Channing Tatum, and Mark Ruffalo. Miller maintains a very deliberate pace. He's not to be rushed. If Foxcatcher didn't run 130 minutes this wouldn't be such a problem but truth be told the first half hour is in serious need of a trim. However, once Mark Schultz meets John du Pont the story becomes compelling and stays so right up till the end.

Ruffalo's performance won't catch anyone by surprise but both Carell and Tatum push themselves outside their comfort zones. Carell has already proven his acting chops in movies like Little Miss Sunshine and The Way Way Back but this one is a potential game-changer. He buries himself in the role -complete with prosthetic nose and a very unflattering hairstyle- of the creepy John du Pont, a paranoid-schizophrenic multimillionaire coke-head, who fancied himself a wrestling coach. He's living proof of what generations of too much money/power and inbreeding may produce. This is the story of how he purchased two Olympic gold medalists and how this eventually led to murder.

Channing Tatum is famous for his lack of acting skills. In particular early on in his career he gave several wooden performances with tone deaf line readings. He has since proven himself to be a decent comic actor and he certainly has the presence and charisma of a movie star. With Foxcatcher he raises his game to a whole new level. Yes he is still playing an athlete but he at least shows he's capable of expressing emotion. In one scene he cries like a baby.

He and Ruffalo put in long hours of training for the wrestling scenes and the results seem incredibly authentic to my nonprofessional eye. The cast also includes Vanessa Redgrave as Jean Liseter Austin du Pont, John's mother, and an unrecognizable middle-aged Anthony Michael Hall as du Pont's assistant, Jack.

The most intriguing section of the movie for me was the early stages of the relationship between the wealthy philanthropist and his wrestling protege. Through John du Pont, Mark Schultz gained entry to the world of the rich and powerful. In one scene he accompanies his mentor in his private helicopter to a charity event. John casually offers him some cocaine while en-route. Mark has a scripted speech he's to give about just what a great man John du Pont is. They spend a lot of time together. Their relationship grows quite physically intimate with Mark becoming a willing participant in du Pont's dissolute lifestyle.

I went into this movie without much prior knowledge of the story and I think I enjoyed it more that way. It's best to discover these characters as you go along. It's a beautifully shot film with a well-written script. Foxcatcher is a bit lugubrious in tone and methodical in execution but it tells a powerful true story of what may happen when mere mortals spend time among the gods.

As Patrick wrote, the film's biggest problem lies in its pacing. Director Miller and the three credited editors who worked on it let the story unfold at a very set and steady pace, often letting scenes and even just single shots linger for quite some time. If all the extra running time was filled with story or advanced the plot it wouldn't feel so long, but the slow pace and gloomy shots are merely to set the mood. Further compounding the slow pace is the fact that as this is a true story, the ending is already known in advance, so the tension is reduced further.

I agree that the performances are the film's highlights. Tatum had set the bar pretty low with his "acting" in previous films, emoting more with his abs than anything else, so it wouldn't take much of an improvement to impress, but to be fair, he does a good job here. For once it doesn't feel as though he's walking through the role, which is a bit ironic since the character he's playing is doing exactly that. Mark Schultz seems to have spent most of his life in his older brother's shadow and once John du Pont enters his life, Mark transfers his subservience to his new mentor. His strong physique is in sharp contrast to his weak personality.

As noted, this isn't Carell first attempt at drama, but it might be his most successful, and he's helped by the prosthetics. His momma's boy, oddball, possibly closeted John du Pont is full of ticks and quirks. What humor there is in the film comes from his attempts to seem like a legitimate sports coach.

Although this is based on a true story, it's not a documentary by any means. Even some quick research online shows that the filmmaker's stayed true to the central story while playing with the details. The timeline of events is condensed and even rearranged. It's not important to the film, but just something to be aware of if you go into it expecting 100% accuracy.

The long running time and the grim story doesn't exactly result in light viewing. While the acting performances are certainly something to admire, especially compared with the star's earlier work, they're not enough to make this the kind of movie you'll want to see more than once.

I will echo my brothers by writing that the movie is often slow but it allows us to truly observe Channing Tatum and Mark Ruffalo act like I have never seen either act before. I have always respected Ruffalo as an actor so his performance was not as surprising as Tatum’s. Channing walks and talks like someone he has never been before. I have joked in reviews of many of his other films that Tatum plays dumb like a natural but here he goes full on retard. I wondered what psychological problems his character had. He seems mentally slow and unsure of himself, even though he has an Olympic medal. His break down scene, which Patrick wrote about, is Tatum’s greatest screen moment thus far in his career.

As Mark is willing to do a speech at an elementary school for twenty dollars, he is easily seduced by du Pont’s wealth. As Scott noted, Mark needs someone to give him direction. That role was filled by his older brother Dave until John du Pont came into his life. Whereas we know that Dave was to be trusted, we are never sure what du Pont’s motives are. Is he simply a wrestling fan with plenty of expendable income or does he have other motives. After a wrestling win, du Pont stares at Mark hugging Dave and then Dave stares at Mark hug du Pont. They each recognize that the other is an influence in Mark’s life and a challenge to their relationship with him.

Du Pont is even shown actively trying to separate Mark from Dave. At one point he writes Mark a $10,000 check and follows it up with a speech that includes such lines as, “You are more than Dave Schultz’s little brother.” “He will never let you be everything you can be.” And “Without your brother you can do whatever you set your mind to.” The wealthy have long been benefactors of artists and athletes but du Pont takes things to a personal level.

As depicted here, du Pont is a contradiction. He pushes the wrestlers to exercise but then offers Mark cocaine, turning him into a user. He speaks of pride but takes Mark to a black tie affair and treats him like a show pony. He forces Mark to give a speech he is ill equipped to make. Mark shaves him and the film suggests that perhaps there was a physical relationship. In real life Mark denies that there was anything homosexual about their friendship. Du Pont and Mark are shown having two things in common. The first is a love for wrestling and the second is that both are socially awkward, with few friends. Although Mark and du Pont are on the same team, du Pont is toxic.

What I found most interesting about Mark’s story is that he wants to get out of his brother’s shadow yet his brother’s shadow is the best place for him to be. Without Dave he is easily influenced by du Pont but with Dave he is able to stay focused. Mark wanted to be his own man but by breaking from his brother and attaching himself to du Pont he basically sold his soul to the devil.

When I started watching this film, my goal was to discover why du Pont killed Dave. On my way to that explanation, I found myself caught up in the performances of the three male leads. All are connected by wrestling but each is very different from each other. Tatum is a revelation while Carell is unrecognizable with his large nose always angled up in the air. Ruffalo has the least showy of the three roles but his is the most real. Yes, Foxcatcher is mildly paced but it held my interest throughout. As far as the reason for the killing, it suggests that he did it because Dave was the man that du Pont wished he could be.