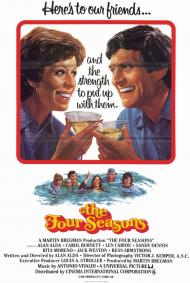 In The Four Seasons, writer/director Alan Alda created a four act story about the relationships of three close couples.  Each act takes place in a different season, accompanied by Antonio Vivaldi's violin concertos.  The Four Seasons are Vivaldi's most famous pieces.   He composed them in 1723, and centuries later they are still amazing.  Every time I watch this movie, the music stays in my head for days.

The film starts in spring as three upper middle class, middle aged couples gather at a country home to celebrate one of their wedding anniversaries.  Everything seems fine until Nick, whose anniversary is being celebrated, informs Jack that he is going to divorce his wife Anne.  A quiet stress falls over the group.

The second act is in the summer when they all get together on a charted boat in the Caribbean.  Anne and Nick have now divorced and he has brought along his new, much younger, girlfriend Ginny.  Her presence disrupts the normal camaraderie.  She and Nick have all kinds of sex and genuinely swoon over each other the entire time, making everyone else listen to them making love. As Jack says, "My God, if one of them farts, the other thinks it's Guy Lombardo!"

Although Ginny's presence changes the groups dynamics, she also brings passion.  As she and Nick screw and skinny dip, the other two couples start to wonder what has happened to their spark.  This comes to a head in the autumn when they all get together to visit their kids at college.  Everyone gets into some kind of argument as the tension is high due to Anne being there as well.  The final act is in a winter lodge where Ginny, now married to Nick, takes a stand against his condescending friends.

The characters here are very well developed.  They all seem like incredibly nice people at first, but as the seasons change we see they all have different sides to their personalities.  Jack is someone who loves to talk about personal issues to the nauseam of everyone else.  His wife Kate is the glue that keeps the group together, planning the trips and offering Anne jobs.  Danny is a paranoid, who at first seems quirky, but then becomes annoying.  "Why does everyone think I'm paranoid? Do you discuss this behind my back?"  His wife Claudia uses her ethnicity as an excuse to get away with saying whatever she wants.   "Danny, I say what I feel. I'm Italian!"

Although a decent comedy, The Four Seasons actually works better as a drama.  Carol Burnett, in one of her first film appearances, reportedly insisted on the "My God, you're perfect." scene.  It is Burnett's finest screen moment.  She balances humor and drama like a master juggler.  She is tossing so many emotions into the air here that is hard to keep track.

The other stand out is Sandy Dennis.  Too often everyone else seems to be overacting, while she plays it small and comes away with the most realistic performance of the movie.  She delivers every line like a woman on the verge of a nervous breakdown.

The one thing that always gets me with this movie is just how pathetic Jack is.  Alda wrote himself a character with some depth, but Jack is an incredibly annoying person.  How any of these people can stand to be around such an arrogant blow hard is beyond me.  All he does is judge everyone else and try to tell them what they should do.  He only asks question so he can answer them.  The fact that Jack has friends at all is the most unrealistic aspect of this otherwise great study of relationships.