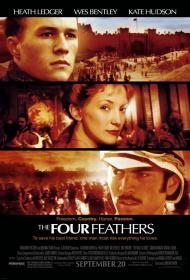 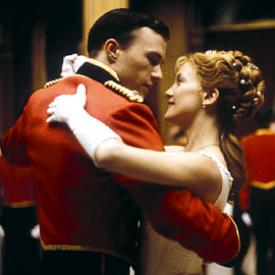 Heath Ledger and Kate Hudson in The Four Feathers.

I expected so much more from this movie. Directed by Shekhar Kapur (Elizabeth), and starring Heath Ledger, it promised to be an entertaining, big budget, historical romp. Instead it turned out to be overly long, filled with characters that I couldn't care less about, and so full of plot holes and inconsistencies that you just end shaking your head with wonderment at all the money that must have been wasted on this truly awful movie.

The movie begins in England near the beginning of the 20th century. A regiment of the army is informed that they will be going to the Sudan to squash a rebellion. Harry (Heath Ledger) decides that he really doesn't want to go to war. Apparently he only enlisted for the water skiing and the travel, oh and because his Father is a career soldier. Just why he doesn't want to go to war isn't really explained, vaguely he questions why they should go to the Sudan, but not in any serious way, before suddenly announcing that he's giving up his commission and going home. His friends all assume that he's done it out of cowardice, as does his fiancée (soon to be his ex-fiancée). They each present him with a white feather, the symbol of a coward, and the explanation for the title.

A few months pass and the war news is bad. Shunned by his family, rejected by his fiancée, and devoid of all friends, Harry decides to head out to the Sudan on his own. Upon his arrival he hooks up with a French slaver who agrees to escort him to where his old regiment is stationed. Along the way on this trip he meets a warrior (the only even remotely interesting character) who becomes his friend and protector.

Now disguised as an Arab, Harry, along with his new friend, goes to work for the British Army with the intent of redeeming himself. 'Hang on', I hear you say, 'Heath Ledger, tall Australian, long blonde hair, big blue eyes? An Arab?' Well, it's what they want you to believe, he actually ends up looking more like the Uni-bomber than an Arab, but this is Hollywood. A movie where California girl Kate Hudson can play an English lady, is a movie where Aussie Heath Ledger can pretend to be an Arab.

There is an amazing battle sequence shortly after Harry hitches up with the army. You've probably seen it in the previews. Thousands of Sudanese swarming at a tight knit little group of British soldiers. It's an amazing sequence filmed with great skill, only I didn't give a damn about it because I have no idea why they were fighting in the first place. I suppose they want the British out of their country, which seems fair enough, but why should I be rooting for any of them?

The movie meanders on with Harry's actions losing all logic as he tries to redeem himself to his various friends, the ones who gave him the white feather. Even, at one point, going to prison where one of his friends is, on the off-off chance that he will find a way to escape once in there.

The movie limps on for way too long after this and finally resolves in way that I couldn't care less about. And the entire movie is this way. People fight, people die, people fall in and out of love and all without ever once convincing you to care about it.

I've heard that some of the earlier versions of this film, which are based on a book, are quite good. I wouldn't know, I haven't seen any of them, but one thing is for sure, they couldn't be any worse. 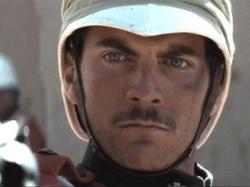 Wes Bentley in The Four Feathers.

The Four Feathers is one of the worst character movies I have ever had the misfortune to see. These three hopeless people are emotionally tied together, but as Scott wrote, why should we give a shit? It shoots for some grand epic type film but misses its target completely.

First of all, I believe Ledger's character to be a chicken shit. Is it not a coincidence that he decides to leave the army right as things have the potential to get dangerous? This movie however does not have the balls to just come out and say it. The movie never gives a clear reason why he resigns his commission. It would have been interesting if they had just come out and made him an outright coward. At least then the movie could have been about him redeeming himself for personal reasons and not just to impress some friends who turned their backs on him when he chickened out.

The one thing I liked in this movie was the acting. I was a bit impressed with Kate Hudson. Her accent was subtle and her performance quite underrated. Ledger, likewise proves again that he is an actor to be recognized. If only the writing made more sense. As Scott wrote, what the hell was he thinking when he voluntarily put himself in prison. Oh, I get it. He must have read the script, so he knew he was going to get out. 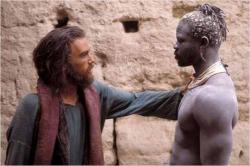 Heath Ledger and Djimon Hounsou in The Four Feathers.

After reading my brothers' reviews I thought to myself this movie cannot possibly be as awful as they claim it is. Boy was I wrong. This is easily one of the worst big budget movies I've been unfortunate enough to sit through in quite some time.

The Four Feathers was originally a novel written by British writer A. E. W. Mason in 1902. As Scott mentioned it has been adapted for the screen numerous times beginning with a silent version way back in 1915. The Technicolor 1939 version is by far the most celebrated, while this 2002 remake is generally considered to be the worst cinematic interpretation of the story.

Scott and Eric mentioned many of the film's problems. It's poorly written, miscast, and moves at a glacial pace. I disagree with Eric about Kate Hudson. I hated her accent and thought she was rather dull. Heath Ledger fares better. He was both a great actor and a true movie star and he gives his usual sterling performance. We'll never know all the roles he might have played, had he not died so tragically young. This movie is terrible but he, at least, rises above the material.

Like Scott my favorite character was the warrior played by Djimon Hounsou. Together he and Ledger generate more chemistry than either of the two men in the love triangle with Hudson manage to create with her. They brought to mind Rock Hudson and Sidney Poitier in Something of Value. Harry's adventures with Abou Fatma are by far the most enjoyable scenes, and it was the only time while watching the movie that I didn't think about checking how much time was left.

There is some nice cinematography on display, most memorably during the big battle scene Scott mentioned. It is excitingly staged and shot. I suppose there are individual elements to the movie that work but taken as a whole it's a sprawling, jumbled mess. It may be called Four Feathers but it's only worth one star.