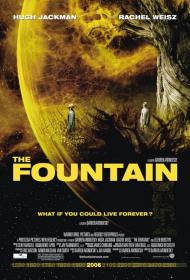 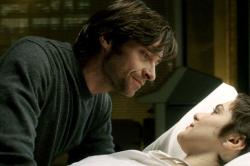 Hugh Jackman and Rachel Weisz in The Fountain.

The Fountain is a difficult movie and I can see why writer/director Darren Aronofsky (Requiem for a Dream) had trouble getting it produced. Budget cuts and changes in the cast caused him to trim down his original story. The result is still a good movie, but it is not without its flaws.

Its story is told in three sections, in three different time periods, all of which center around death and the search for immortality. Hugh Jackman plays Spanish Conquistador Tomas in the past and scientist Tom Creo in the present and the distant future. In the past, he is sent by Queen Isabel (Weisz) of Spain to find the tree of life. In the present, he is seeking desperately for a cure to his wife's (Weisz again) brain tumor and he thinks he may have found it in the bark of a tree from South America. The bark, when tested on monkeys, seems to grant eternal youth. And finally, in the future, Tom is traveling through space in a bubble, with the tree of life, toward a distant dying star, which may or may not be Xibalba, the Mayan Underworld. Is this future sequence real or is it entirely symbolic? It's up to you to decide.

Whatever Aronofsky's point is in making this film, he keeps it dangerously ambiguous. Anyone who felt let down by the ending of 2001: A Space Odyssey will surely feel equally let down by the ending of this movie. The meaning I took from it is that death is a part of life and in seeking to prolong our life we very often forget to live it. Either that or its a love story between a man and his tree.

Tom, for instance, knows that his wife is dying and that his time with her is limited, but he prefers to spend time at his lab in a seemingly impossible quest, rather than spending time with his wife. He refuses to listen to her when she talks about her impending death, as if by ignoring it, he can make it less real.

Even when I wasn't quite clear what Aronofsky was trying to say with this movie, I was never bored with it. Most of the time I complain that movies these days are too long, but here's one that could have been, and maybe should have been, a little longer.

While it's easy to overlook amongst the visual weirdness and convoluted storylines, Jackman turns in an emotionally charged performance. He anchors each of the different portions of the story and provides the connection between them all. Weisz is fine as well, but hers is a much smaller role.

This is clearly going to be a movie that causes a love/hate reaction. Those kinds of movies aren't always the best kind, but they are always the most interesting. 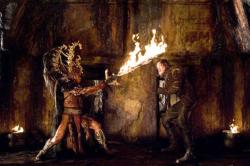 Therefore, the Lord God banished Adam and Eve from the garden of Eden and placed a flaming sword to protect the tree of life. - Genesis 3:24

I agree with most of what Scott wrote, but not all.  He posed the question, "Is this future sequence real or is it entirely symbolic?"  There is certainly plenty of room for interpretation but this is how I saw it.  The part in the present is the only real story, while the scenes in the past and future are merely Izzi's nearly completed book.  She explains to Tom at one point that her story starts in Spain and ends in the Nebula that represents the Mayan Underworld.   She even tells him, "It's all done except the last chapter. I want you to help me. Finish it..."  The end of the film is Tom's conclusion to the story.

Both the past and future sequences are filled with fantastic imagined elements, while the present stays mostly grounded in reality.  In the present Izzi jokingly calls Tom, "My conquistador! Always conquering..."  She tells him about a Mayan she met and a line he told her that she uses in her book.  The end of the movie takes place where her book ends, with Tom completing the story as she asked.  The tree of life is in all three stories but in the present is only referred to as a rare tree from South America that may have amazing medicinal properties.  In the other two it is a god like living entity.

If you enjoy interpreting and guessing what a film is supposed to mean then have at it.  If you are just looking for entertainment, look elsewhere.  The story is told out of order and, as already stated, unclear about what it all represents.  Sure, the tree is hope and death is the film's theme, but it is too often approached in such a bizarre fashion that you are left wondering what Darren Aronofsky was thinking.