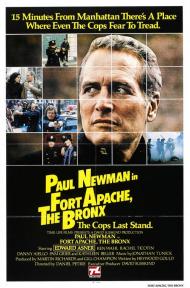 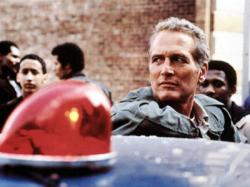 The most unique aspect of this movie is the location. As the title gives away, it's set in the Bronx. In 1981 that meant a place that signified the worst inner-city slum in America. A place of burned down buildings, deserted streets, prostitutes, gangs and high crime rates. The police station where the action is centered is nicknamed Fort Apache because to the police officers stationed there it feels like an outpost in the Old West.

Paul Newman stars as Murphy, an 18 year police veteran who once rose as high as detective, but was busted back down to uniformed patrolman where he's stayed for most of his career. Newman, who was in his mid-50s when he played this part, looks at least 10 years younger than that. He's as good as you would expect him to be and he improves the fairly typical cop movie formula with his charm and acting talent.

There's not really much of a plot, just more a series of subplots loosely tied together, some of which never really go anywhere. Ed Asner shows up as the new by the book precinct captain (one of the few plot points that resembles the original western movie Fort Apache) and he and Murphy have some conflicts over the best way to relate to the neighborhood. The central crime in the story starts off as a psycho cop killer played by Pam Grier, but that storyline fizzles out and goes nowhere. Murphy starts dating and falls in love with a nurse who turns out halfway through to have a secret of her own. Murphy's partner is also in love, but after one scene with his fiancee, she disappears from the story. The final portion of the movie involves Murphy being the witness to a crime committed by fellow cops and his decision to turn evidence against them or not.

Steven Bochco has said that this movie was an influence on him when he created Hill Street Blues and it's easy to make the comparison. There are so many minor story threads woven together that it almost feels like a season's worth of a cop series shoved into one movie.

Although there's not much here that we haven't seen in other, better, cop movies, the gritty setting does create plenty of atmosphere. Several shots of Newman walking alone along Bronx streets amongst the rubble of burned out, torn down buildings are visually powerful. It looks more like he's walking through a war zone than the middle of the largest, most prosperous city in the United States.

This isn't a boring movie. There's plenty of action and Newman has charisma to spare. If the script were just more focused and the fat of the story trimmed down, it could have been quite good. Instead, it's merely decent and an interesting look into New York City's grittier past.

As Scott wrote, Paul Newman was 55 years old when he made this movie. He is playing a man closer to 40 and he pulls it off effortlessly. Not since Cary Grant had a leading man aged so gracefully. By contrast Edward Asner (who looked middle-aged when he was 29) was nearly 5 years younger than Newman but is clearly playing someone older. When it comes to the genetic lottery, all men are most definitely not created equal.

I agree wholeheartedly with my brother that Newman makes this run-of-the-mill cop drama much better than it deserved to be. He brings his vast charm and unique intelligence to the role of Murphy, a career cop stuck patrolling the mean city streets with his much younger partner Corelli (Ken Wahl). He also proves just how fit he was as there are several moments that call for him to do extended running around the devastated Bronx streets. In a shirtless scene he shows off the fat free physique of a man half his age.

One such running scene sets up a memorable bit of dialogue between Newman, Wahl and Danny Aiello, playing a racist cop named Morgan. When Murphy fails to run down a purse snatcher, Corelli asks Murphy, “What's his problem?” Murphy replies, “He thinks I'm a liberal.” (Which, of course, both Paul Newman and Ed Asner, famously were).

The only thing I disagree with Scott about is the Pam Grier -cop killer- storyline. It does technically fizzle out but it is intended to do so to make a point. That point being how many murders go unsolved. SPOILER ALERT: Her murdered body winds up being left in a pile of debris, wrapped up in a rug, where it will eventually be found but with nothing to connect her to the dead cops she shot in cold blood. It is one of the more realistic touches in a movie filled with police movie clichés.

One cliché is the portrayal of the much younger Puerto Rican nurse Murphy has a relationship with. On the surface she has risen above the trappings of the South Bronx ghetto where she grew up and still lives. She is intelligent and has her shit together. She is a nurse who works at a hospital in her own troubled community to help other, less fortunate, people. Oh, and one more thing, she also just happens to be a heroin addict! Really?! This allows for Newman's big dramatic scene but it turns Isabella into just another stereotypical victim.

The best decision they made was to film on location in The South Bronx. Like Scott said it resembles a bombed out war zone more than a modern American city. The shots of the iconic movie star walking these rubble filled streets are quite striking. Some of the special effects haven't aged too well though. For example, early in the movie when Murphy and Corelli save a suicidal transvestite from jumping off a building, it is painfully obvious a dummy was used in the long shot.

A huge hit in its day, Fort Apache, The Bronx gave Paul Newman a chance to shine despite a story filled with trite cop movie clichés and peopled with walking stereotypes. 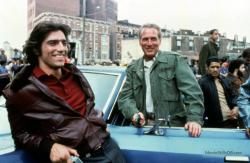 Ken Wahl and Paul Newman in Fort Apache, The Bronx

Yeah, Fort Apache, The Bronx has some stereotypes and clichés but as Patrick mentioned, it also contains some unique moments. After Grier kills the two patrol officers, men resembling rats scurry out of doorways and holes in dilapidated buildings to quickly rob the corpses of their money and guns and take the treasures back to their dirty little nests.

The scene where Corelli pays his fiancé a visit seems like something from a decade or two earlier. Here is a cop who works the mean tough streets of the Bronx but has to plead with his virginal girlfriend for physical affection. He reads “Dress for Success” and thinks his clothes will get his girlfriend in the mood. He jokes with Murphy that he will still have to beg for it though.

Newman is playing the laid back veteran that knows the streets like a pioneer on a familiar river, navigating every twist and turn with experienced ease. He delivers his 17th baby and never seems to stress, no matter how his day may be working against him. The scene where he deals with a knife wielding loony by also pretending to be nuts is a tactic Mel Gibson would later employ in the Lethal Weapons movies.

Through a brief view into both Murphy’s and Corelli’s personal life we get to know and like them. The partnership of two men of the law is as old as Holmes and Watson. It almost always works as you simply throw two different guys together, resulting in some colorful conversation and perhaps a bit of friction. They always work well together, at least eventually. Look at the scene where Corelli busts into an apartment, acting angry and aggressive while Murphy pretends to be the calming voice of reason. It is all an act to get the guy to talk.

Fort Apache, The Bronx contains some humorous moments. I liked the desk sergeant who never gets too worked up over anything, including his new boss questioning his job performance. Patrick mentioned Newman’s “liberal” line while I also liked when Newman was looking out of the precinct window at the protestors, chanting loudly with them, “Let the brothers go!”

Patrick wrote of the poetic ending of the killer prostitute. She roams the city streets like a succubus. She entices and lures men but we never know when she may kill or just pass unnoticed. Murphy and Corelli even intervene at one point on her behalf, not knowing who she is.

As Scott wrote, there is not much of a plot. This is more of a look at what it is like to be a cop for a few days in a horribly dangerous place. What Murphy and Corelli see and experience in a few days is more excitement than many will know their entire life. Making up for the lack of a story arc is the likability of the two leads. We want neither one to be killed nor hurt and it was their safety and fate that kept me interested in watching the film play out.