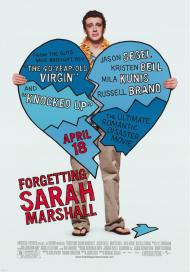 A naked Jason Segel and a bland Kristen Bell.

Forgetting Sarah Marshall is a mostly forgettable film. Sarah is an actress on a CSI type television show that Peter writes the mood music for. They break up when she announces that she’s banging a famous rock star. This puts Peter in a depressed state, and he cries a lot. To get out of his funk, he goes to Hawaii, where he coincidentally runs into Sarah and the rock star, and cries some more. Peter spends many scenes looking stupid and falls for a hotel clerk. Oh, and for no apparent reason, Jason Segel does two full frontal nude scenes.

If you like guy jokes, you may find a few things to laugh at here. Someone finds Peter naked in bed and asks, “Are those sad tissues or happy tissues?” When someone sees a hot girl he says, “I just went from six to midnight.” Paul Rudd’s drug addled surfing instructor is worth a couple of laughs. “I like her red hair. I wonder if the carpet matches her pubes.”

The problem the movie really has is that you are supposed to like and root for Peter, but he is such a whiny little bitch that he is more annoying than likable. His idea of writing a Dracula musical, with puppets, is stupid, although everyone in the movie finds it cute. Segel wrote this film and the songs for the Dracula play. The most credit I will give him is that he is brave enough to put it all out there and hope people like it, and since I already mentioned the nude scenes, he does put it all out there.