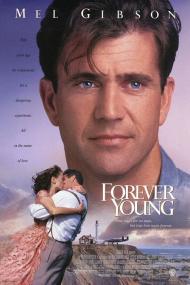 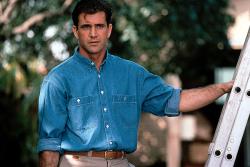 Forever Young is a bittersweet romantic film with a dash of science fiction. Gibson, Curtis and Wood make a great combination of ingredients. The recipe is intriguing but the ending, unfortunately, leaves a bit of a bland aftertaste.

Gibson plays Daniel, a cocky test pilot in 1939. Picture Clark Gable in the 1938 movie Test Pilot, only more wholesome. Daniel can't get the nerve up to ask his girlfriend to marry him. One day she gets hurt and ends up in a coma. Distraught, Daniel volunteers for a top secret cryogenics experiment. World War II happens and Daniel ends up forgotten and frozen in a military warehouse.

In 1992, two boys find and accidentally release Daniel while playing in the warehouse. He ends up staying with one of the boys, Nat, and his single mother, Clair, as he tries to find someone still alive from 1939 who can help him. Clair has no idea who Daniel really is

Some romantic friction occurs as Daniel plays protector to Claire and father to Nat. The FBI eventually learn of Daniel and come snooping. The movie takes a twist when Daniel learns that his former girlfriend did not die in a coma. She is still alive. Daniel, meanwhile, is suddenly aging very quickly. With the FBI in pursuit, Daniel steals an old plane from an air show, and makes a desperate attempt to see his old flame before he dies.

Forever Young is a very sentimental film. It has a great line that is repeated twice in the movie, "You're holding my heart." The one problem I have with this movie is that the ending has Daniel old. Sure he gets reunited with his old love but they are both 80 years old. Daniel basically lost 50 years of his life. Forever Young is a very solid film with good performances, if only the ending could have been a bit more satisfying!