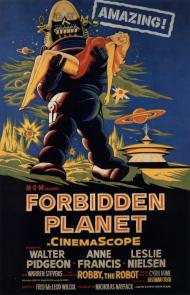 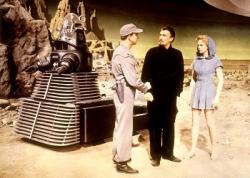 On the surface it's a rather campy 1950s outer space adventure, but Forbidden Planet is actually one of the most influential science fiction movies of all time. The opening shot of a spaceship appearing at the top of the screen before flying off into the distance obviously influenced Star Wars and within the first 5 minutes there are several ideas that would be famously copied by Star Trek a decade later. This MGM release was one of the very first big budget science fiction movies and also the first one to be set entirely on another planet in another solar system. It even boasts the first entirely electronic movie score.

Although the special effects are laughably primitive by today's standards, and the entire movie was shot on a sound stage, it was cutting edge in 1956. The scenes set in Altaira's garden were shot on the same stage used for Munchkin Land in The Wizard of Oz. If you look closely you will recognize that little babbling brook with the blue bottom. The bridge over it had been removed in the intervening years.

Loosely based on Shakespeare's The Tempest, Forbidden Planet takes place in the year 2200 on the planet Altair IV, located some 16 light years from Earth. As the story begins a United Planets Space Cruiser arrives to investigate the fate of an expedition sent there 20 years earlier. They quickly discover that all of the members of that expedition are long dead from some mysterious invisible planetary force.

Everyone that is except for two people. A father and daughter. Dr. Edward Morbius was the linguist for the expedition and his daughter Altaira was born on her namesake planet and has never known any human being other than her father (her mother died during childbirth). Just why they were allowed to survive when every other member of the expedition was torn limb from limb by this unknown creature remains a mystery.

The only other sentient being on the planet is Robby the Robot. He would become the most famous character in the movie as well as being the prototype for all robot/droids to come. He is sort of a combination of C-3PO and R2-D2. He was so popular that he later starred in his own movie called The Invisible Boy and appeared on numerous television shows such as The Twilight Zone. The robot in Lost in Space was a direct rip-off of Robby.

Some of the acting is quite bad (Leslie Nielsen plays the hero) and the love story angle doesn't really work, and yes it's glaringly obvious that it was filmed on a stage with painted backdrops, but none of that matters because the storyline is so groundbreaking. It involves an ancient and very advanced civilization built by an extinct species called the Krell (this year's Prometheus owes it a huge debt). The enemy is much more complex than being simply some outer space monster. It's actually more of an inner space demon. It's all quite Freudian.

It is no exaggeration to say that Forbidden Planet created the original blueprint followed by every other movie and television series set in outer space. But don't take my word for it. Watch this seminal science fiction film for yourself and you'll soon see my point. 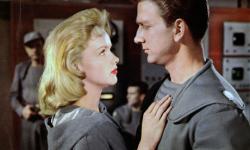 Forbidden Planet is an influential science fiction movie, but to say that it created the blueprint for every outer space movie or television show is an exaggeration. Certainly Star Trek owes it a massive debt and Gene Roddenberry admitted in interviews that he was a fan of this film. The connection to other Sci-Fi franchises however, is far more tenuous or non-existent. Perhaps the biggest influence Forbidden Planet had on Hollywood is that it proved that a movie set entirely off-Earth was not only possible, but could also be profitable.

The plot could easily be the plot of an episode of Star Trek. Even the three main characters from the ship fit the mold of Star Trek. They are the ship's Captain, first officer and ship's doctor. Doesn't that sound familiar? Unfortunately, that's also the movie's biggest problem. Star Trek could have told this story in less than an hour, but here it takes 90 minutes. It would also have told the story with a little more levity and camaraderie, while here it is all played very straight, apart from the very occasional lighter moment. There are long stretches of this film that are actually quite dull, no matter how groundbreaking. It's the unintentional humor that provide some of the film's most entertaining moments. The crew's reaction to finding a girl on the planet is cause for a few laugh worthy moments, particularly in how the crewmembers immediately start leering at and flirting with her even right in front of her father.

It's true that the special effects are primitive in their execution, but they are nevertheless still quite effective and occasionally impressive. The trip through the Great Machine still looks good even after all these years. And Robby the robot, while awkward in his movements, is quite iconic and easily the movie's biggest scene stealer. It's the flying saucer spaceship that is truly the film's most dated special effect.

I agree with Patrick that the acting isn't particularly noteworthy. Nielsen plays it so straight that he almost seems to be playing a parody of a space hero, especially given his later comedic performances. Walter Pidgeon even seems to be reading some of his lines during his longer exposition scenes. Anne Francis manages to bring a little sexiness to the film as the only female character. Her outfits, what little there are of them, also influenced Star Trek.

Forbidden Planet does contain many Sci-Fi firsts, but in terms of entertainment value it hasn't held up all that well. It's far too slow paced. The movies that it influenced have improved on the ideas it created and now it seems dull by comparison. 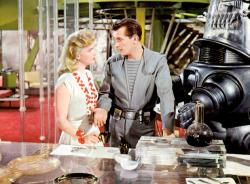 It may be an exaggeration to write that Forbidden Planet created the blueprint for every outer space movie or television show but only a small one. Not only did Star Trek steal heavily from this film but so many other movies and shows have borrowed elements first used here. Having a non-living companion like Robby the Robot became standard in science fiction. Patrick mentioned the droids in Star Wars and the robot in "Lost in Space", while I will add the android in Aliens, Data from "Star Trek: Next Generation" and even K-9 from "Doctor Who".

Forbidden Planet’s influence is perhaps even further reaching. Is it just a coincidence that the all-knowing character in The Matrix (1999), “Morpheus” sounds awfully familiar to the all-knowing “Morbius”? Wolverine’s famous metal skeleton “adamantium" was not a creation of Stan Lee or Marvel comics but the writers of Forbidden Planet. When Dr. Morbius describes the metal used by the extinct advanced civilization, he calls it “adamantium steel.” For the record, Marvel Comics first used the word “adamantium” to describe Ultron’s outer shell, in "Avengers" #66 (July 1969).

Anne Francis was quite a looker. Later, the Commander comes upon Altaira swimming in a pool who asks him to join her. The Commander states, “I didn't bring my bathing suit.” He then stops in mid step when she asks, “What's a bathing suit?” She is supposed to be naked but you can briefly see some clothing on her when she exits the water.

Scott thought this could use more levity while I enjoyed what humor there was. One scene was not necessarily intended to be funny but cracked me up. After Robby finally shows up, Altaira scolds him, “Where have you been? I've beamed and beamed.” Robby answers, “Sorry, miss. I was giving myself an oil-job.” Come on! Think dirty.

Although I could guess where the story was going, the mystery was still interesting enough to keep me watching. This must have been quite a unique plot in 1956. The pacing is perhaps a bit slow but not enough to damage the movie. Every scene and dialogue hints at or reveals something to come. I truly enjoyed Forbidden Planet, amateur special effects and all.