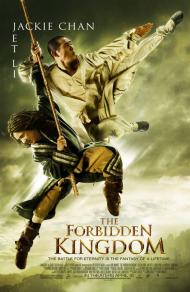 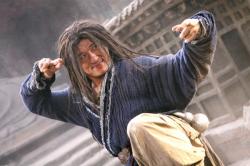 The Forbidden Kingdom combines, for the first time, the talents of China's two greatest exported movie stars, Jackie Chan and Jet Li. Throw in the choreographer from the groundbreaking Crouching Tiger, Hidden Dragon, Woo-Pen Yuen, and you have the potential for one great martial arts film.

Boston teen, Jason Tripitikas, played by Will and Grace's Michael Angarano, who does not even use a hint of a Boston accent, is fascinated with karate movies. He has a reoccurring dream about a bow staff wielding Chinese warrior named the Monkey King. After discovering a staff at a local pawn shop, he is sent into the past, with the staff, to return it to it's rightful owner, the Monkey King, who has been imprisoned by the magical Jade Warlord.

Joining Jason on his trip is a drunken Kung Fu Master, played by Chan, who is revisiting one of his most famous Chinese film characters, Wong Fei-Hung from the Legend of Drunken Master movies. Also along is Li as a monk of few words and a beautiful girl out for revenge.

The movie is filled with fighting/action scenes. Li and Chan have a great one on one fight. An assassin, hired by the warlord to kill them all, adds some excitement. She is a white haired, whip carrying she devil whose hair helps her fight when need be. Li and Chan train Jason in the martial arts. Some of the best scenes are when the two masters argue over how to train him. He seems to pick it all up in a matter of days so I guess it really did not matter who trained him.

As in Crouching Tiger, Hidden Dragon, the masters seem to float through the air when fighting. It still looks cool, but it is hardly as groundbreaking as it once was.

Li plays dual roles. Besides the monk he is also the Monkey King. It is the weakest aspect of the film. Early on, it is explained that the Monkey King disrupts an important meeting of immortals. The leader of which likes his antics, but he goes away for 500 years at a time so he does not have to deal with his lunacy. The Warlord, however, dislikes him and thus imprisons him. Just why the Monkey King is so important is never elaborated on. In fact, he is quite annoying, and as such, the entire motive of the movie seems rather unimportant.

The Forbidden Kingdom is a fun film to watch, especially for the younger crowd. It does however, lack in any real urgency. Considering all of the action/movie talent that went into this film, I had expected some greater tension. Plenty of things happen on screen, but if you think to hard about any of it, you realize that this is just a remake of The Wizard of Oz. A teenager goes to a foreign, magical land, collects some friends on a journey to a castle. Along the way, a witch occasionaly pops up to harass them. Instead of ruby slippers their is a bo staff. The comparisons are nearly endless. All of the companions play dual roles. The only thing different in this remake is that Dorothy, The Tin Man, Scarecrow and The Cowardly Lion all know how to kick butt.