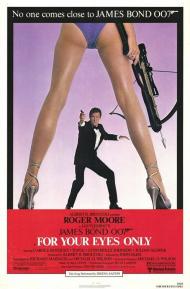 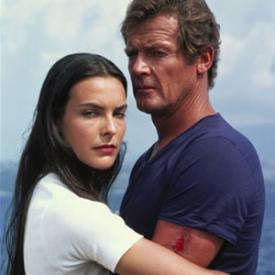 Carole Bouquet and Roger Moore in For Your Eyes Only.

Too often, Moore's Bond movies had the cheesiest plots, The Man With The Golden Gun, or stupidest villain, Jaws. Due to these flaws, Moore is often remembered as the least favorite of the Bond actors. However, For Your Eyes Only, proves that Moore could do a great Bond when the material was actually good enough.

A British spy ship, disguised as a fishing trolley, is accidentally sunk by an old World War II mine. The boat carries an encryption device called ATAC. It gives commands to the British Polaris fleet. In the wrong hands this device could have the British fleet fire on any target. Bond is sent to recover it before the Russians can.

Along the way, Bond teams up with cross bow wielding, Melina Havelock. Her parents were secretly helping the British government retrieve ATAC, but were assassinated in front of Melina. Early in the movie they are pursued, by gun firing thugs, in a car chase down a mountain side in Spain. As their tiny car bounces through the country side seeming to be running for their lives, Moore has this groan inducing line, "Don't you just love a ride in the country." He says with a smile to Melina. It was those kind of wise cracks that always removed all sense of tension from Moore's other Bond movies. Other than the opening teaser, which has nothing to do with the plot that is his only bad line.

From Spain, they travel to the Italian Alps. There Bond meets another girl, Bibi. She is a wanna be Olympic gold medal athlete. In a small plot twist, Bond ignores her sexual advances as he sees her as being to young to have sex with. Her sponsor is Aristotle Kristatos. At first he seems to want to help Bond, but we later learn in Greece that he is actually working for the Russians.

Bond movies have always traveled around the world. This one centers almost entirely in the Mediterranean. There is a great ski chase scene in the Alps. Bond and Melina go diving off the coast of Greece and end up getting dragged by a yacht through shark infested waters. The climax of the movie involves mountain climbing up to an old monastery. This movie utilizes the landscape better than any Bond film.

Moore stands out in For Your Eyes Only because, other than the afore mentioned flaws, he plays it all very straight. The scene in Greece where he runs up several flights of stairs and shoots at a fleeing villain in a car is his best. The car spins to a stop and finds itself balancing on the edge of a cliff. Moore coldly gives the driver regards from an Italian agent, the guy killed earlier. He then kicks the car over the edge, sending the assassin to his death.

For Your Eyes Only has the best opening credits of all Bond movies. It shows an endless parade of naked silhouetted woman. They strike varied poses and often with a gun. While that is going on, there is also shots of the hypnotically beautiful Sheena Easton singing the title song. As Austin Powers might say, "For your eyes only baby, yeah!" 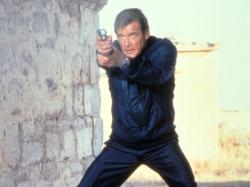 Roger Moore in For Your Eyes Only.

After 1978's disastrous Moonraker, when the Bond franchise jumped on the Sci-Fi bandwagon of the late 1970s, the producers of the Bond films decided they had pushed the level of believability to beyond the breaking point. They needed to return to Earth and the original source material from which the franchise had sprung; namely, the books. In doing so, they created one of the very best James Bond movies ever with For Your Eyes Only.

Now I have seen this movie so many times that I thought I would see nothing new in viewing it again for this review. I was wrong. Like Eric mentions in his review, I had always assumed that an old WWII mine struck the British Spy Ship and sunk it accidentally. However, this time I noticed (and put two and two together), that in the attack on Kristatos' warehouse, among the rolls of newsprint filled with raw opium, there are several mines exactly like the ones that sank the British ship. It was no accident at all. Kristatos, instead of just taking advantage of a situation as I'd always thought, had instigated the entire scenario.

As Eric mentioned, Roger Moore, for once, plays this movie straight and serious. He actually comes across as threatening for one of the only times during his period as 007. Reportedly, Moore, accustomed to lighter and more comedic performing, was disappointed by this movie. Also as a first, he seems to be playing closer to his real age. His refusal to sleep with young Bibi is the only time in the history of Bond that a woman's sexual advances are refused. (It's difficult to imagine Connery's Bond doing the same.) While he is still capable of super-human feats on the ski slope, no extra efforts are made to hide Bond's age. When he runs up the steps to meet Locque's car, he seems to be winded as he climbs. This is the closest Moore ever came to the world weary, battle hardened Bond of the books.

The real secret to why this is one of the best of the Bonds though, is because, from start to finish, the central plot to this movie is completely plausible. For once, no one is trying to take over the world. The Russians want ATAC and the British want it back. That's a plot more reminiscent of a John Le Carre novel than a James Bond movie. The writers and directors of this movie proved that a James Bond movie is more exciting and entertaining when it has a basis in reality. It's just a pity that future Bond films didn't follow the model set forth by this one.

There is also a lack of gadgets in this movie. For the first time in a long time, Bond is forced to think his way out of situations. The one car chase in the movie has Bond behind the wheel of, not a souped up sports car, but a beat up old Citroen. He has to use his wits instead of horsepower to escape. It's because of this that I can even forgive Moore the cheesy one-liner that Eric mentioned.

Eric also mentioned the rather disappointing pre-credit sequence and I couldn't agree more. I always fast forward over it whenever I watch this movie. This also has the added benefit of getting to the credits faster, which as Eric mentioned, are the best of any Bond. Sheena is not only beautiful; her rendition of the title song became just the third Bond theme to be nominated for an Oscar. It eventually lost out to Arthur's 'The Best that You Can Do'.

For Your Eyes Only is one of the few Bond movies made after his death that I think author Ian Fleming would have enjoyed. It takes the best bits from the books and the movies and mixes them together in a martini glass. Shaken, but not stirred, of course. 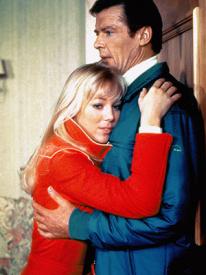 Lynn-Holly Johnson and Roger Moore in For Your Eyes Only.

With the exception of Dr. No and Goldfinger, I have never cared much for the Bond series. It's not that I can't appreciate the formula. On the contrary, I love the romantic and traditional aspects of the character and the plots. You know, the pre-credit opening action sequence, the latest theme song, the gadget scene with 'Q', all the chases and explosions, Bond romancing and rescuing different beautiful women, and of course the familiar ending. So just what is it then, that sets those first few entries in the series apart from the rest? Well other than the obvious fact that they starred a young Sean Connery, it's because they exist in the right time era for the character. James Bond movies should all be set between the years 1945 and 1965. In the modern world 'Bond, James Bond' is like a fossil from another era.

Now that I've got that off my chest I will say that I agree that this is the best Roger Moore entry. It is much more realistic in some key ways. For example, even though I am fully aware that nothing fatal ever happens to him, I was actually feeling a bit anxious for OO7 when he was hanging off the side of that mountain at the movies climax. And as Eric pointed out the different locales are used quite effectively. For a movie that is more than twenty years old the action sequences have held up fairly well.

Finally, as both Eric and Scott have mentioned, the theme song is a good one. In fact the opening credits created a sense of nostalgia in me. I was in High School when the movie came out and I have very distinct memories of hearing the theme song playing on the radio.