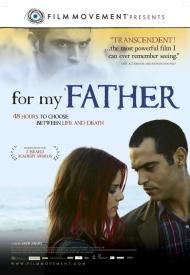 The unorthodox Jew and the reluctant Palestinian terrorist.

Why would someone strap a bomb to themselves and blow up innocent people as well as themselves?  Is it for 72 virgins in the afterlife?  Is it merely hatred for all things non-Muslim?  For My Father (Sof Shavua B'Tel Aviv)  answers that question for one particular character.

For My Father starts with a Palestinian, Tarek, being driven into Tel Aviv as a suicide bomber.  When the bomb vest is attached, he is told that it will explode if it is removed.  He walks himself into a crowded market and pushes the button, but it fails to detonate.  He is now a terrorist stranded in Tel Aviv.  He finds a tiny electronics store run by an old Romanian couple.  He strikes a deal with him that he will fix the hole in their roof in exchange for a new whatever, to fix the detonator.

As this is Friday in Israel, The device will not be available until Sunday.  Tarek is now stuck spending the weekend in Tel Aviv, surrounded by people he intended to kill.  The Romanian couple let him stay with them.  Tarek gets to know them as well as a girl, Keren, who runs a kiosk (a little store) across the street.

Keren is a bit of an outsider as well.  She has dyed red hair and dresses to her own tastes.  Her parents are orthodox and some Yeshiva boys come by occasionally to harass her for embarrassing and shaming her estranged parents.

The brilliance of this film is that it gets you to like the bomber.  Tarek and Keren become friends.  She tells him her story, and he eventually tells her his story, excluding the part about having a shrapnel filled bomb attached to his chest.  Through his story we understand why he is where he is.   It is not easy to imagine an audience having empathy toward a suicide bomber, but you will feel his frustration at being pushed into such a corner.  You hate what he has set out to do, but you also hate how he got there.

Tarek seems put into a no win situation.  Will he go through with his plans or will a miracle occur?  Sometimes it all seems to perfectly pieced together to be believed.  It's biggest success is showing that one of the world's most hated persons, a suicide bomber, is still a person none-the-less.