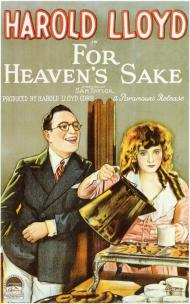 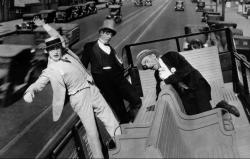 Harold Lloyd races to his wedding in For Heaven's sake.

Harold J. Manners (Lloyd) is a rich young man for whom everything goes his way.  He's so rich that when his car crashes, he just marches into a car showroom and writes out a $9,000 check and drives a new one straight out the door.  When he inadvertantly donates the money to start a mission, he ends up falling in love with the daughter of the man who runs it.  To win her hand though, first he must round up the local toughs and bring them along to the mission and then escape from his rich friends who want to stop him from getting married to a woman so far financially beneath him.

Like most of Lloyd's films, and a lot of silent comedies in general, the big set pieces of this movie are its chase scenes.  The first and funniest chase involves Harold getting a group of local bums and criminals to come to church services at the mission.  He kicks, hits, and generally harrasses a bunch of them until he soon has a crowd chasing him down the street.  At one point the crowd gets ahead of him and he has to jump in a cab to get ahead of them again.  There are a lot of nice little humorous moments throughout the chase and it is easily the funniest sequence.

The movie ends with another big chase scene as Lloyd tries to once again round up the guys, only this time for his wedding and the guys are drunk.  The group of them end up on a speeding double-decker bus.  It reminded me a little bit of Lloyd's later film Speedy, but not nearly as funny or original.  There are some funny moments during it and Lloyd does a few good stunts as he climbs around from level to level and thorugh the window, but it just lacks that special spark.

Apart from the chase scenes Lloyd does have a few funny moments at the beginning of the film where he shows the most amazing luck.  When he buys a cigarette but the cashier can't change a $100 bill, he borrows a quarter off of someone, nonchalantly puts it in a slot machine that he just assumes he'll win and then does.  It makes a change from his usual character; that of the young man trying to become a success to win the hand of a girl.

Ironically, despite this being one Lloyd's lesser films, it was one of his most successul financially, earning $2.6 million dollars and was the 12th highest-grossing film of the silent era.  It certainly has its moments, but is hardly worthy of such distinction. 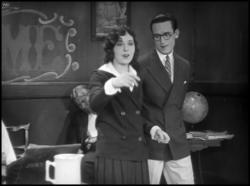 Jobyna Ralston and Harold Lloyd in For Heaven's Sake.

Scott, I respectfully disagree with you on this one. For Heaven's Sake is a wonderful movie. I would recommend it as a great introduction to the art of silent film comedy. It runs just under an hour and is delightful from beginning to end. Its breakneck pace never lets up. I'm not in the least bit surprised it was one of Lloyd's biggest hits at the box office.

I remember seeing clips from this movie on television on Saturday mornings as a kid. It was a half hour series where scenes from Harold Lloyd's movies were edited together with humorous narration added. Both of its big chase scenes were included. Scott is right that the manner in which J. Harold Manners rounds up the petty criminals at the local pool hall and gets them to “attend” a sermon at the mission is clever and hilarious. Sight gag for sight gag, Harold Lloyd was the funniest of all the silent clowns. Notice the many creative ways in which he adds members to the group of men chasing him.

Where I disagree with Scott is about the final chase, where Harold tries to herd the group of drunken men back to the mission for his wedding after they have “rescued” him from the millionaire's club. Although Harold is good, it's the antics of the inebriated tramps that makes this sequence so funny. The way they stumble around, completely oblivious to their surroundings and the reactions they are causing in others, is sidesplitting. In most of his chase scenes Lloyd is merely running away from someone. For this scene he managed to come up with a wholly original idea.

Scott, I think you brought up another reason for this movie's success. The fact that Harold is playing a wealthy, carefree rich guy and not his usual meek nobody trying to get a job to impress a girl. And he's not competing with another man for her hand either. In fact this movie doesn't really have a villain at all. It's just a series of hilarious misadventures.

Lloyd once said, at the height of his popularity in the 1920s, that he liked to alternate between “gag pictures” and “character pictures”. For Heaven's Sake is a gag picture that was released between The Freshman and The Kid Brother, both of which were character pictures. And while those movies combined Lloyd's trademark sight gags with a more developed storyline and character arc, For Heaven's Sake is probably the funniest of the three. It's a frantically paced silent movie masterpiece that proves it's sometimes better to not over-think comedy. 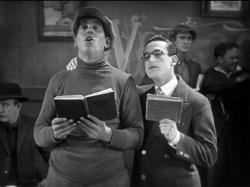 Patrick noted that Lloyd is not playing, "...his usual meek nobody trying to get a job to impress a girl." Still, For Heaven's Sake is very much intended for the average Joe, as it makes fun of the wealthy. Early on, some fellow rich guys comment on Harold that, "He bought a new car to match his white pants."

The first three decades of the twentieth century created more American millionaires than ever before. This was greatly due to the stock market and even Hollywood. Prior to this, wealth was more or less described by inheritance and land or business ownership. Here were newly rich people who did not actually break a sweat working for a living. They were ripe for the making fun of and considering that silent movies were very much a commoners form of entertainment, made for easy jokes showing the rich in bad light, such as Harold not wanting his rich friends to think he donated money to a mission.

Some moments are real gems, like when Harold trips, flips and catches the framed picture. A few moments later comes the big chase scene Scott enjoyed. I liked the scene where Harold unknowingly beats the hood up in private and then helps him out to his waiting friends, whom the Hood remarks of Harold, "Fellers, if this guy can preach like he can hit, it's gonna be a tough season for Satan."

The finale, with Harold shepherding the five drunks to his wedding is the films best part. I am not sure what bug had crawled up Scott's ass when he watched this, (I am not so respectful about disagreeing) but those scenes are hilarious and have plenty of "spark". It also contains the funniest line when one drunk says to another, "Some guys is naturally ignorant, but you abuse the privilege!"

Harold Lloyd was one of the wealthiest stars of his time, but he still knew how to connect with his audience.