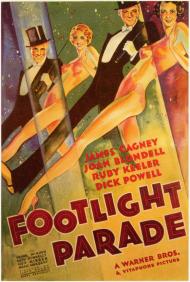 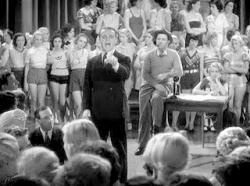 Footlight Parade gave tough guy James Cagney an opportunity to show off his years of vaudeville training. In it he plays Chester Kent a musical theater producer. When his livelihood is threatened by the arrival of talking pictures he comes up with the idea of doing live musical prologues before each movie. All goes well enough at first, until his ideas start getting mysteriously ripped-off by the competition. In order to ensure secrecy on a make or break contract, he locks his entire cast and staff inside the rehearsal studio for seventy-two hours, while they feverishly work out three different and spectacular routines.

This movie plays at lightning speed. The scenes are short and peppy and full of snappy one-liners. Cagney and his wisecracking, love-starved secretary, played by Joan Blondell, have the best lines. Here's a typical exchange between them. "Listen, Nan, send a new boy and girl on right away, and make sure they're not in love with each other." "Right." "Uh, get a couple already married." Or, another time she tells her phony rival for Cagney's affections, "As long as there are sidewalks, you've got a job."

Hoofer Ruby Keeler and tenor Dick Powell round out the supporting cast musically, having already teamed successfully together in 42nd Street earlier that same year. She makes the magical, and seemingly effortless, transformation from a mousy, bespectacled stenographer to a dancing star, while he goes from being an overly eager kept-boy to a suave gentleman. Frank McHugh adds some laughs as the exasperated stage director. Every time Cagney interrupts his dance rehearsals with different instructions, he humorously replies, "It can't be done, I tell ya, it can't be done."

The great Busby Berkeley (before leaving Warner Bros. for the greener pastures of MGM) staged the three final musical numbers. They run consecutively and, together, comprise the last thirty minutes of the movie. The first one is the weakest and the most dated. Entitled 'The Honeymoon Hotel' it has a rather lame song between groom Powell and blushing bride Keeler on their wedding night in Jersey City. It does feature a very young Billy Barty in a funny bit, but pales in comparison to the other two numbers. The second one features scantily clad chorus girls comprising a human waterfall, followed by a geometric bathing beauties routine that predates Esther Williams by ten years. The sheer extravagance of this number has rarely been topped. The funniest thing about it is that there is no way a real audience seated in a theater could see the production from the breathtaking angles they are shot from. I guess no one was supposed to notice. The final and most memorable number features Cagney himself. He is forced to step in at the last second to replace a drunk cast member. The number is called 'Shanghai Lil' and he plays a sailor looking for his lost love just before he has to sail for America from the Orient. He sings passably but was far more successful as a hoofer, displaying a very unique style. He does an energetic tap routine on the top of the bar with Ruby Keeler as his Shanghai Lil.

The dynamic Cagney, talented costars, a deft script and over-the-top musical numbers add up to an enjoyable, if not quite great, motion picture. 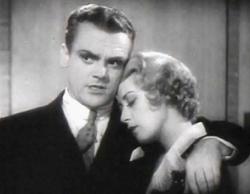 This movie just screams the 1930s. No other decade could feature a cast that includes Cagney, Joan Blondell, Ruby Keeler and Dick Powell in a backstage musical with numbers choreographed by Busby Berkeley. Patrick mentioned that Keeler and Powell had already appeared together in 42nd Street, but they'd also done Gold Diggers of 1933 that same year, also with Blondell, with numbers by Busby Berkeley. If you're a fan of the era and this type of movie, there's no way you won't enjoy this one, which, while perhaps not as famous as those other two, is a very entertaining film in its own right.

Although Cagney is dismissive of it in his autobiography, as he is about most of his early work, saying only that "I at least had the pleasure of dancing.", he reportedly lobbied to get the lead role. He had only been in Hollywood for 3 years and he'd already made 13 films for Warners. While he's best remembered for his tough guy gangster persona, he always considered himself an old song and dance man, so it's not hard to believe that he would work to get this part, which would end up being his first Hollywood musical.

Another obvious clue that this is a 1930s film is that it contains many racy lines, costumes and dance routines that would only be allowed in the pre-code era. Patrick mentioned the "As long as there are sidewalks, you've got a job." line of Blondell's. It was cut from the film when it was rereleased after the code went into effect. There's even a character that the script uses to poke fun of the censors, who at that time were around but mostly powerless. He objects to nearly all of Cagney's ideas for dances, including demanding the removal of kittens in a number where the girls are dressed up like cats. Later in the film when he is caught in a passionate embrace with the scheming Vivian, he proclaims,"I was just showing Miss Rich what you can't do in Kalamazoo."

The pace of the story is very fast. As Patrick wrote, it ends with 3 extended musical numbers. The actual story portion of the film only takes about an hour. Cagney and Blondell make a great team. There's a love triangle with Cagney lusting after Claire Dodd while Blondell pines for Cagney, but there's never a doubt who will end up with whom. Cagney and Blondell have way too much chemistry together for it to end any other way. Perhaps this isn't surprising since they came to Hollywood together when a play they both performed in was bought by Warners. The script is as fast as the plot, with many one-liners and quick gags.

As Patrick wrote, the final musical numbers are well done, but impossible to perform on a stage. They all feature multiple sets, special effects, quick costume changes (Cagney dives over a bar in a suit and emerges in a naval uniform at one point) and even camera cuts. The only way to perform or appreciate them is on film. You just have to ignore the fact that audience watching wouldn't be able to see half of what's going on in each number.

Although Patrick calls "The Honeymoon Hotel" the weakest of the final numbers, I actually enjoyed it the most. It's filled with sexual innuendo and a lot of jokes, most of which would never have made it past the censors just a year later. The same is also true of the next two numbers. In the water number the girls wear bathing suits designed to make them look almost naked and they perform some very suggestive maneuvers in the water and out of it. In the final "Shanghai Lil" routine, Keeler's Lil is obviously a prostitute, as are the other women in the number. She performs the dance in yellowface while singing in a very stereotypical and racist Chinese accent. They're all well staged, but except for getting the chance to see Cagney and Keeler hoofing atop that bar, I thought this final number was the weakest of the three.

Cagney might not have remembered it with great fondness, and he and Patrick are right when they say it's not a great film. It's far too sleight to be truly great, but it is an entertaining movie very much of its era. 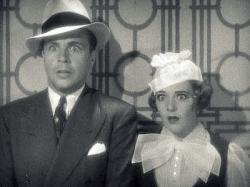 Yeah, this is definitely a pre code film. I loved the sidewalk line Patrick mentioned. One musical number contains the wink, wink chorus, “Come on, come on, come on and get your lovin.” When the girls sleep at the theater, they wear sheer nightgowns that show their form through see-through pajamas. The "Honeymoon Hotel" number is a tad risqué as it is about couples about to have sex. Check out the amount of exposed cleavage on the girl at the bar in the “Shanghai Lil” number.

Although the plot is less sophisticated than an episode of "Glee," the cast raises it above its mediocrity. As my brothers wrote, Cagney and Blondell are incredible together. I love the exchange when Cagney says sarcastically, “Well, I sure know how to pick 'em.” To Blondell, who responds just as sarcastic, “You said it, Papa.” Cagney then asks, “Maybe you should help me next time, huh?” Blondell then states the obvious, “What do you think I've been trying to do?”  At another point, Blondell tells Cagney, “I played a pair of deuces like four aces and they paid.” He understands exactly what she means.

Cagney was one of those mega-stars that improved any film he appeared in. He brought with him a charisma and star wattage that has rarely been seen. His well noted on screen energy is on full display. Whether dancing, running about or rattling off some dialogue, Cagney brought life to every scene he appeared in.

The musical numbers are a bit interesting to watch but they are more spectacle than plot advancing. Cagney was a decent musical star but not a great one. He was much better with dialogue than lyrics. I would have eagerly sacrificed some of the musical numbers for more scenes between Cagney and Blondell.