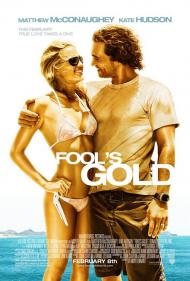 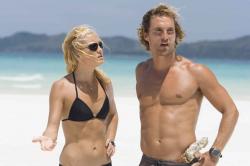 With Fool's Gold, Matthew McConaughey and Kate Hudson prove that they can strike gold twice. As a romantic comedy team, they previously co-starred in How to Lose a Guy in 10 Days, (2003). They now head to the Florida Keys for a romantic comedy that adds some action and adventure. Although not a perfect film, the stars chemistry and the sunny setting are a nice escape from winter at the movies.

The movie opens with a hilarious scene of McConaughey and Bremner scuba diving while unknown to them, their boat on the surface meets with disaster. He then meets with some inept bad guys who try to kill him before he finally makes it to his divorce finality. This sets a tone for a movie that combines romantic humor with gun toting bad guys.

Although Ben and Tess get divorced it is made clear that they still have feelings for each other. Ben says out loud that he still loves her while Tess keeps reminiscing about their sex life. As her lawyer puts it, "You married a guy for sex and then expected him to be smart." With the discovery of an old plate and with the help of a Millionaire and his dizzy daughter, Ben and Tess reunite to find a treasure they have been searching in vain, for years, to find.

Ben has no discernable income. He is in debt to a rapper/gangster. Tess, who was working on a doctorate degree is, for some reason, a steward on a yacht. They decide to go after the treasure for the excitement but the financial reward is obviously a factor. "If we don't go after that treasure, it's going to haunt us for the rest of our lives and you know it. You really think I'd lie about something like this?" Ben says to Tess who asks, "Why not? You're liar." Ben responds, "This is such an inappropriate time to dwell on that!" As with all good romantic comedies, Ben and Tess argue as foreplay.

Fool's Gold is a nod to Romancing the Stone, in which a couple fall in love as they search for treasure, only Fool's Gold ups the blood a bit. Compared to Rambo this movie is nothing, but I cannot remember the last time I saw a romantic comedy where people get shot and killed. Usually the violence in these type of movies never get beyond the two lover abusing each other, such as when Tess hits Ben with a cane. After all, what fun is falling in love without a few set backs along the way.