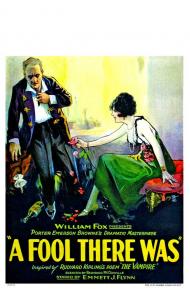 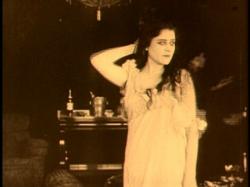 A Fool There Was made Theda Bara a household name and introduced the term 'vamp' to the American vernacular. Fox studio chief William Fox made Hollywood history when he turned Theodosia Goodman, a nice Jewish tailor's daughter from Cincinnati, Ohio into the exotic Theda Bara. His publicity machine fabricated her life story, easily convincing the public that she had been born in the shadow of a pyramid and spent her childhood riding camels across the desert near the Sphinx. Her name was an anagram for Arab Death and she gave interviews in dimly lit, incense filled hotel rooms that were decked out to look like harem tents. The ploy worked beyond anyone's expectations and soon Miss Bara was a huge movie star, second in fame only to America's reigning Sweetheart Mary Pickford, her polar opposite. Before Gloria Swanson introduced the first modern sophisticated movie star several years later, cinema actresses were either the archetypal 'virgin' or the 'whore'.

Based on a stage play A Fool There Was tells the story of the 'Vampire' as her character is known; she devours men and discards them. Over the course of the movie we are introduced to two of her ex-lovers and read a reference to another. One is now a homeless beggar, another sits rotting in prison and one commits suicide on the deck of a luxury liner while this completely wicked woman laughs in his face. This is one of the best scenes in the movie and occurs moments after the vamp delivers her famous line “Kiss me, my fool."

Her latest conquest is John Schuyler. He is a happily married man with a young daughter. He is also very rich and important. In fact when the ill-fated lovers meet aboard the ship he is on his way to England as an ambassador for the United States government. Before the ship is even out of the harbor Theda Bara has him under her spell. The rest of the movie shows his corruption and helpless moral disintegration at the hands of this wanton creature.

One extraordinary facet of this movie is its uncompromising handling of the adult content. Granted it is melodramatic and tame by today's standards, but it is also easy to see how it shocked and titillated audiences of the time. And those expecting a happy 'Hollywood' ending are in for a surprise. 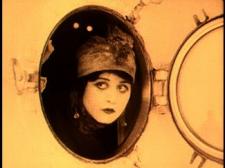 This morality play is pure soap opera. It may have been shocking and intriguing at the time it was released, but it's so incredibly dated now as to have lost all of its original entertainment value.

What it does provide is an interesting look into the past. It's almost like a time machine watching some of these old silent films. If you wanted to see what people wore and looked like in 1915, just watch this movie.

I've often heard of men in the past becoming excited by the sight of a shapely ankle, but this movie was the first time I'd actually seen it happen. It seems comical now to watch the Vamp at work as she drops a flower and then slowly lifts her skirt high enough to show off her ankle when the Fool bends down to pick it up.

Theda Bara is one of those famous figures from the silent era that I'd heard of my entire life, but never seen. I'd certainly heard of her and her legendary vamp character, but had never actually seen her in motion. I have a hard time seeing the attraction just from this film. She certainly wasn't what would be considered beautiful today, but I guess she was fairly daring for the time.

It's always difficult to review movies of this age. Is it fair to rate how entertaining they were when attitudes and technology have changed so much since they were released? In 1915 this film was probably absolutely amazing, but today it's just far too dated. For film buffs it is interesting from a historical perspective but as a film narrative it's just too crude by today's standards. 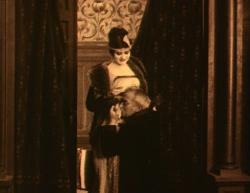 Are us men really so pathetic when it comes to getting sex?

Of course attitudes about sex and infidelity have changed Scott, and these characters are very dated.  So what?   It simply means this is how some people at the time looked at things.   Sure it is fascinating to see the cars and fashions of those times, but I find the social perceptions much more interesting.

This film was probably very shocking at the time.  It was a very early example of recreational sex as pleasure and manipulation.  The scene where John and the Vamp are lounging in Italy showed them both in a state of complete relaxation.  His head is lying against her leg and he has a very content look on his face.  They are obviously in the delirious after glow of sex.

In 1915, many women's only knowledge of sex was based on a few words from their mother or what they experienced with their husband.    Bara played a woman with carnal knowledge.  She got men to do her bidding.  No doubt many women of the time scoffed at this character, while secretly emulating her.

This is not a vastly entertaining film, but it shows how attitude toward infidelity has not changed greatly, Monica Lowinski and Amy Fisher became famous for having sex with a married man.  Both were branded as harlots, while being offered book deals.  Meanwhile, men like John Edwards and Al Gore have had their careers and families destroyed because of their infidelity.   The biggest difference now is that the slut gets less blame and the man gets more.

A Fool There Was could be shown in a college class on the changes of sexual attitiude in American culture.   The way the film was made is very puritanical by todays standards, but the story itself, is in some ways still relevant.