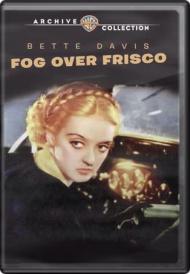 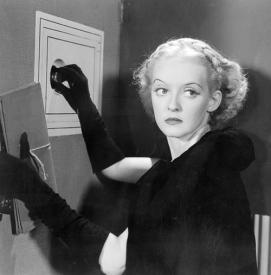 Demonstrating those famous Bette Davis eyes in Fog Over Frisco.

Fog Over Frisco is an atmospheric, gritty little crime drama from Warner Brothers in the summer of 1934, which managed to appease the newly enforced Hay’s Code without losing its bite. It remains quite violent, even slightly disturbing, but a pair of lovers turn out to be married that would probably not have been Pre-Code.

Bette Davis and Margaret Lindsay play wealthy stepsisters in San Francisco. Arlene (Davis) is a reckless, party girl dubbed Queen of the Night Clubs by the local papers, Val is a well mannered society darling. Their father owns a brokerage firm where Arlene’s fiancé, Spencer, also works. Val is dating a newspaper reporter.  Val wants to see for herself Arlene's much talked about social life. The movie opens with the two sisters, escorted by their men, out on the town at a swanky night club frequented by underworld types.

Val excuses Arlene’s thrill-seeking, headline making, behavior as simple high-spirits never suspecting the criminal activity her step-sister is involved in. Their father, on the other hand, suspects worse and is fed up with his step-daughter’s outrageous actions. It turns out that Daddy really does know best because for the past two years Arlene has been laundering money through the Bradford brokerage firm to the tune of nearly 3 million dollars.

Arlene Bradford is another in the long list of memorable bad-girls Bette Davis brought to life on the silver screen. Arlene’s a real peach. She has no scruples at all. She’s using Spencer simply for his ability to sanitize dirty money. She feels nothing for him and is actually in love with another man. Davis really sinks her teeth into the role and seems to be having fun playing to the back row. She’s tough as nails, quite pretty and clearly not wearing a bra under those Orry-Kelly creations.

The plot takes a sudden jolt midway through and the action kicks into high gear. There is a well-staged and excitingly shot scene that takes place at the pier in San Francisco Bay and yes, there’s a fog rolling in from the sea. My one complaint is that after this climactic sequence the story takes too long tying up the loose ends.

The supporting cast includes a few familiar faces like Hugh Herbert, Alan Hale and William Demarest. Lyle Talbot gives a lifeless turn as the clueless Spencer. Donald Woods fares much better. As Tony, Val’s reporter boyfriend, he gets to play hero.
Margaret Lindsay is adequate but completely overshadowed by the volcanic Miss Davis.

William Dieterle’s direction gives the movie more than a hint of film noir half-a-dozen years before the birth of that genre. Parts of the movie were shot on location on the steep streets of San Francisco and in the bay. Fog Over Frisco is different from most Bette Davis Pictures. This is no emotional chick flick. It’s a guy movie that just happens to star Bette Davis.