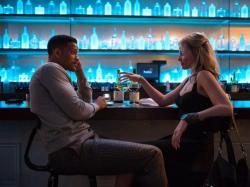 Will Smith and Margot Robbie in Focus.

Will Smith isn't the greatest actor in the world, but he is one of the most likable. Sure, he's flirted with serious parts and even been nominated for a couple of Oscars, but the heart of his success has always been his laid back charm. It's too bad the writing/directing duo of Glenn Ficarra and John Requa don't seem to know how to show off that charm to its fullest. Perhaps this is because Smith is just one in a long line of actors to consider the part rather than having it written with him in mind. Too often here he's in "serious" mode with his natural charm suppressed. It's still an okay movie, but it's not all that it could have been.

A movie about con artists should be fun and indeed, this movie is being marketed that way. However, despite some funny moments, you can't really call it a comedy. But it's not serious enough to be a great drama, nor tense enough to be a genuine thriller. It falls somewhere in between all three of those genres and isn't enough of any one of them.

The story is told in two acts. The first and most entertaining portion of the story involves experienced con artist Nicky (Smith) taking Jess, a young pickpocket (Robbie), under his wing. He teaches her the ropes during the week leading up to the Super bowl in New Orleans as he and his team fleece, pickpocket, steal identities and anything not nailed down. He also takes Nicky to bed. At the end of that week however, he dumps her without a word of explanation. The story then jumps 3 years into the future to the longer and less entertaining second act. Nicky and Jess find themselves in Buenos Ares on separate business revolving around millionaire Garriga. Each of them wants something from him. Their lingering feelings for each other threaten to derail each of their complicated plans.

One of the biggest problems with the story is that while it's supposed to be about con artists, there aren't very many actual cons. Nicky's operation revolves more around theft than con artistery. There's only two true cons in the entire film. The first one is so ridiculously implausible as to be laughable. It involves the use of subliminal messages in a way that would be impossible to predict and could easily cost Nicky over $1 million. The second con isn't even really a con. It's just the theft of some technology that happens to involve a couple of lies. There are twists and turns in the plot, but the distinct lack of a clever con is noticeable.

Margot Robbie, who brought attention to herself in 2013's The Wolf of Wall Street, continues her move toward the A-list with this part. She certainly looks good here, but isn't given much chance to stretch her acting abilities. She does fine with what she's given, but there's only so much any young actress could do with this part. She does share a believable chemistry with the much older Smith and together they manage to overcome some of the script's weaknesses, but not all of them. Still, it's there scenes together that are the film's highlight.

It's the lighter moments that work best. The few times that Robbie and Smith get to verbally spar brings some life to the story, but there aren't nearly enough of those moments. What enjoyment there is to be found is pretty much down to the two leads looking good in varied and exciting looking locations. 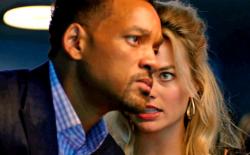 Will Smith and Margot Robbie are too serious in Focus.

I agree. Will Smith is a movie star more than he is an actor. He has an onscreen persona that audiences love and find easy to identify with. He's also a hard worker. Even though he made no movies between 2008 and 2012, Focus is Will Smith's 24th movie in 24 years. Years that have been kind to him. He looks far younger than his age of 46. And it's nice having him back on the big screen. But, as my brother wrote, he is playing it all too seriously here.

There aren't enough wisecracks in the script, and since the lighthearted moments are the best scenes in the movie there should have been more of them. Instead we get served a half-baked romance drowning in earnestness. And to be honest Smith seems next door to awkward in the serious lovemaking moments. The worst acting in the movie comes when Nicky unexpectedly -and unceremoniously- ditches Jess in New Orleans. Smith attempts to express tortured longing battling with commitment anxiety but only manages to look vaguely confused.

Nicky and Jess are two great characters played by two incredibly charismatic stars. So where's their sense of fun together? Rather than the overly serious, on again/off again relationship the script insists on they should have gone more for a William Powell/Myrna Loy type relationship from The Thin Man movies. Instead of them splitting up after the first act they should have gotten married and the second act should have been them pulling off elaborately clever cons together while drinking cocktails and spouting well chosen quips.

Focus still manages to entertain but what could have been a major hit that launched a franchise is now more likely to be but a blurry memory by the time summer rolls around. 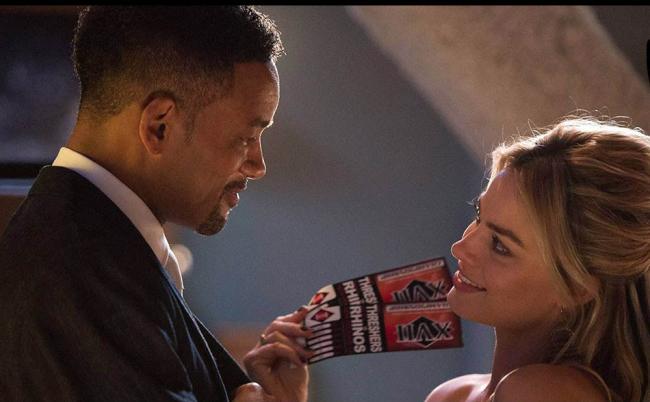 Will Smith and Margot Robbie in Focus

I agree and disagree with each of my brothers. Although he could knock off about five years, Will Smith does not look, far, younger than his age of 46. Smith is clearly a man above middle age, even though he did work out for the shirtless scene. However, I do agree with Patrick that he and Margot Robbie share absolutely no chemistry, in or out of bed. There is never any sign of passion in this relationship above a friendship. Their love story never comes into focus.

My brothers are spot on when they wrote that the film is missing a sense of romantic fun. Sure, there are some light moments but as they suggested, some clever verbal sparring between these two criminals could have provided some real spark. The closest it gets is when Smith is telling a lie to the man who had him and Robbie captured and tied up. His tale is detailed and sounds solid until he finds out Robbie did not act, at all, in the way he described.

I love the idea of this movie as a type of William Powell/Myrna Loy relationship. Think of how Loy would have admonished Powell for telling such a fabricated story. When was the last time a movie featured married lead characters that supported and defended each other? All that we ever seem to get from Hollywood films are married couples that fight or betray each other. The best part of Mr. and Mrs. Smith was when the husband and wife finally joined forces and worked as a team.

Real life dictated a scene that should have inspired the writers. Robbie spent about 24 hours traveling to get to New York for the audition. She made it on time but Smith was late, saying that he "was coming from Queens." A frustrated Robbie reportedly said to Smith, “Yeah? Well, I just came from an island off Croatia and I'm here on time." She believes that outburst is what won her the role.

We can blame Smith and Robbie for their lack of connecting on screen or we can point the finger at the writers. Robbie, “Why did you come up here if you were on to us?” Smith, “Professional curiosity, and I like boobs, so I considered it was a win win.” And do not get me started on Smith’s psychobabble about how to get people to trust you. Like much of this film, it relies on coincidences and lots of hope.

With different writers things may have worked out better. Perhaps we will find out when Will Smith and Margot Robbie reunite in the upcoming superhero flick Suicide Squad, where Smith portrays Dead Shot and Robbie plays Harley Quinn.