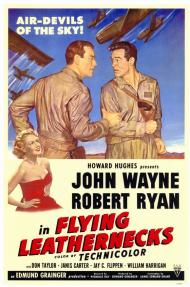 Robert Ryan talks it over with John Wayne.

On film, John Wayne fought in every American war The United States ever participated in. In Flying Leathernecks, Wayne is in typical hard as nails military mode, playing a World War II squadron leader. World War II would cover most of his military movies.

Wayne plays a new CO to a flying squadron in World War II. His assignment as new company commander causes immediate friction with the executive officer who got pasted over for the promotion. He and the XO, Ryan, square off as much as they do with the Japanese. Ryan is the likable officer. He is slack with the rules and lets the men off easy. Wayne is the hard ass. You can guess who the men like more.

Produced by airplane enthusiast Howard Hughes, Flying Leathernecks features all kinds of aerial action. Some filmed for the movie and some stock footage from the war, which was blended very well into the actual finished film. In fact, this movie is quite fast paced. Other than a needless sequence on the home-front, no doubt thrown in to appeal to female viewers, the friction is always there. In between fighting the Japanese, Wayne and Ryan go about disagreeing with each other in subtle and not so subtle ways.

Whereas this movie works as an action film it fails on other levels. We really do not need Wayne’s trip home to visit his wife and child. Sure it shows a soft side to his character but we see that at the end of the movie anyway. After his leave he gets reassigned to a new squadron that coincidentally has most of the same men as before. The entire on-leave section should have been left on the cutting room floor.

The worst crime committed in this movie though, is not the editing, but the dialogue. Whoever came up with it must have had a list of cliches and tried hard to use them all. “This separates the men from the boys.”, “No man is an island.”, and “Into every man’s life a little rain must fall.” all found their lugubrious way into the script.